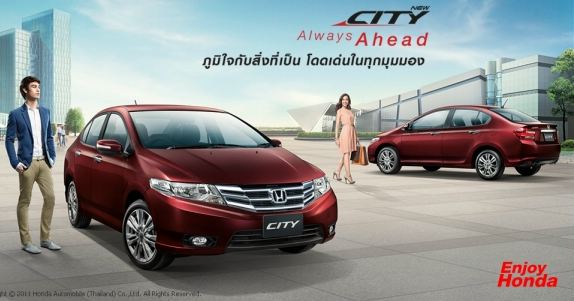 A few days back we brought to you the leaked brochure images of the new Honda City facelift. The Japanese car major is planning to launch the facelift in India this festive season with cosmetic changes made to the exterior and more features added to the interior. Now Honda Thailand seems to have revealed the first official video and images of the highly anticipated car.

The changes made to the exterior of the new City include a chrome finish grille which replaces the current grey finish unit. While the headlamps remain largely unaltered, the tail-lamps will be redesigned for the 2012 version of the car. The front bumper will witness some alterations. There will be new alloy wheels on offer and some other minor changes visible only upon close observation will be made too.

On the inside, the video orange backlit instrument cluster will be replaced with a white-blue backlit unit, although the design will remain the same. The instrument cluster may also include an ECO meter, like the Honda Brio. Also shown in the video are flappy pedals behind the steering wheel to shift gears manually on the automatic variant.

There will be a sunroof on offer in the top of the line variant, and a CD player will finally make its much needed appearance on this C-segmenter. We don’t expect a hike in the price of at least the base and middle variants. The top of the line City with some exclusive features may be offered at a slightly higher price.

With the advent of the Sunny at an incredibly low price, the fight for supremacy has become all the more difficult for the City in its segment. Nissan are making no bones about their aggressive pricing strategy for all their upcoming models, which would also include the Sunny diesel. If they manage to price the Sunny diesel below the Rs 7 lakh mark, it would sound the death knell for not just the city but most other cars in the segment. We hope the new City brings with it a more attractive price tage, just like it did with the New Jazz. There seems to be no other way for survival in the future for the City, which once reigned supreme.