The 2017 Bangkok Motor Show saw the introduction of a new concept motorcycle from the stables of Honda Motorcycles. Christened as the 150SS Racer Concept, the motorcycle is an absolute stunner. It’s got a muscular design and features premium hardware.

Upfront is a spherical LED headlight which adds a retro element to the modern day concept. Right above the headlight is the instrument cluster and there’s a something peeking out from the front of the console which looks like a camera. There’s another one, a MotoGP style gyro camera at the rear too. The details are scarce and thus, besides the regular image/video capturing, we really do not know their exact function yet.

Also Read – VIDEO: From San Francisco to Lahore on a Honda CBR 600, via broken ribs and a smashed bike 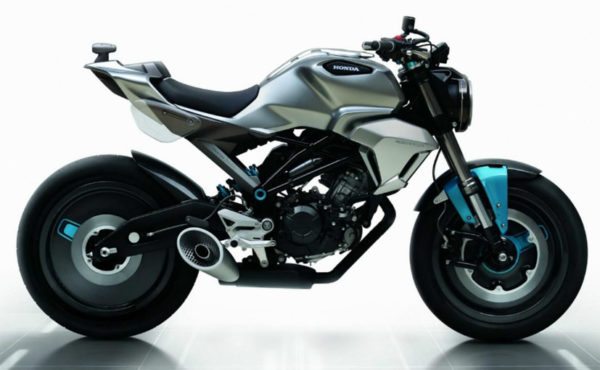 It’s got a muscular design with chiseled fuel tank which features shrouds for a beefier look. It features a single seat design and the pillion seat region gets a supersport style rear cowl along with the aforementioned gyro cam. At the rear is a compact LED tail light. The concept is built around a trellis frame and rides on carbon disc wheels instead of alloys or wire-spoked units. The list of hardware is pretty premium too. The 150SS Concept rides on upside down telescopic forks upfront and a monoshock at the rear. The megaphone exhaust is short in length, designed to provide better centre of gravity. Surprisingly, the concept uses non-ventilated discs on both ends.

Mechanical details are scarce but the 150cc liquid cooled engine should deliver around 18-22 bhp of power. It’s still too early to say when can we see a production ready version of the 150SS concept. It’d probably lose most of its “cool” bits by the time it reaches production stage too. We’d keep an eye on what’s Honda brewing with this one. Meanwhile, let us know your views about the Honda 150SS Racer Concept through the comments section below.