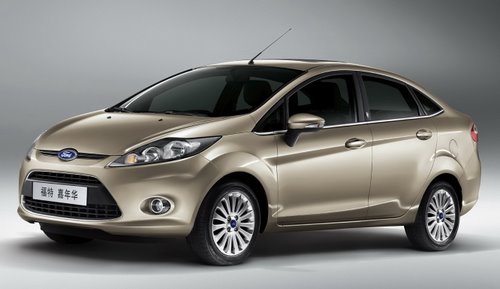 Ford has finally put an end to speculation and unveiled the engine options for their kinetic design wrapped – New Ford Fiesta at Bangalore.Unlike what was expected, both petrol and diesel engines for the new Fiesta have a cubic capacity of 1.5-liters.

The new engines offered are the 1.5 lit Diesel and the 1.5 lit Petrol engine. The 1.5 lit diesel is actually the upsize of the 1.4 Duratorq engine and now features an inter-cooler. Power figures for the Diesel are 89.72bhp which is quite respectable and a healthy 20.81kgm of torque. The diesel engine reasonably powerful, but its real virtue is fuel efficiency. The engine returns a best in class 23.5kpl fuel efficiency according to the ARAI test cycle.

Both the engines are mated to the 5 speed manual gearbox and we can expect a twin clutch auto-box later some time.  As a total package the Ford Fiesta has a host of new features which are new to the Indian industry like the Voice control features whose videos we have showcased earlier. New Fiesta also features Cruise control which is a great inclusion for its class. Then there are other goodies like USB\AUX, rear parking sensor, Electric Power Steering which has a pull drift compensation which helps in the stability of the car.

With best in class fuel efficiency and a smart package new Ford Fiesta seems to have got the equation right. It will be interesting to see how the new Ford Fiesta is priced. What should be the right price of the car according to you?