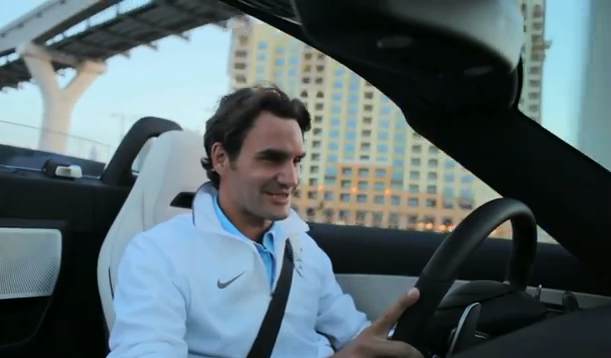 We have been keeping you up-to-date about the soon-to-be launched Mercedes SLS AMG Roadster. The car has not been launched yet, but one Roger Federer, by virtue of arguably being the greatest tennis player to have walked this planet, has managed to get a ride of the baby. And M-B, smart enough to not lose the opportunity have made a slick video of the tennis star sampling the open-top supercar on the streets of Dubai.

Now, it was a little difficult for us to imagine a global icon like Roger Federer letting M-B use his name and face just for a ride. Won’t every carmaker in the world line up the best cars it sells to Roger’s garage if he agreed to endorse them for free?

So we did a bit of Googling and realized that we were right. The Swiss star does have a multi-year deal with M-B which covers the use of his image, personal appearances and product placement. Not without reasons do they say there are no free meals in this world.