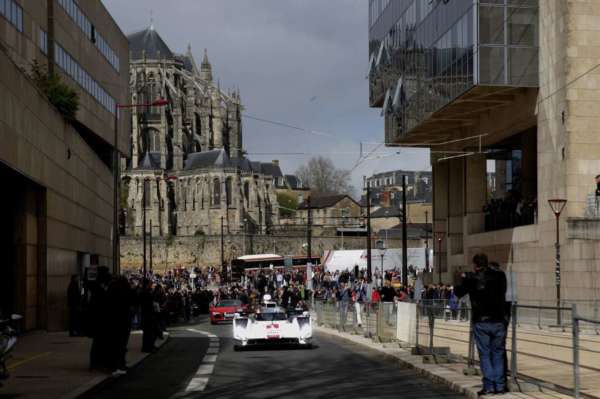 Audi’s new LMP1 race car completed the near-ten-kilometre distance through the city in a motorcade, did a lap on the Circuit Bugatti and arrived in front of the race track’s modern Welcome Centre amid the applause of the invited international journalists and guests. “I’ve been competing at Le Mans since 1997 but this was absolutely new for me, too, and very exciting,” said Tom Kristensen, who in 2006 had driven the Audi R10 TDI on its world premiere in Paris.

Audi also surprised the public with a new livery of the Le Mans car. While the body of the new R18 e-tron quattro was still black with red details when the car made its world debut in December, a striking colour scheme now catches the eye. The new colour scheme of white, silver, red and black stands for fresh, expressive graphics. “The colours are symbolic,” explains Dirk van Braeckel, Design Manager Motorsport and Special Projects at Audi. “Silver emphasises the past success in racing. As a very quiet colour it provides the base for our livery. White, as the second colour harmonises well with silver and appears very light. It stands for the hybrid drive. White is used asymmetrically in order to symbolise the complexity of this powertrain technology. We opted for matt black, as it nicely contrasts with the gloss white, Black stands for light-weight design. The black look of the large fin on the engine cover is intended to represent something like a backbone. The reflective livery is particularly impressive at night and provides the spectators with an enhanced experience,” explains van Braeckel. “Due to its longitudinal orientation the graphics express the speed that is so typical for Le Mans. Even the rims include a red segment. Due to the wheel rotation, it achieves a very dynamic effect.” 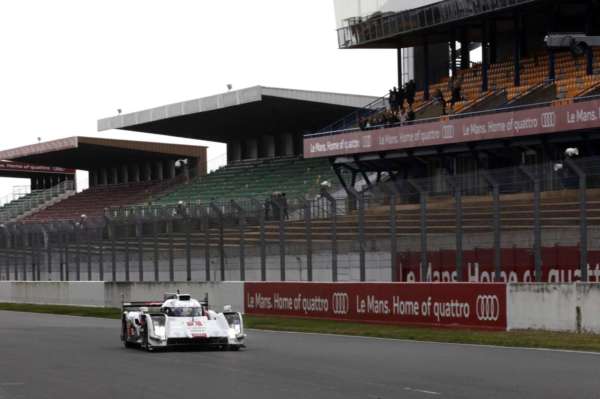 The cubic capacity of the V6 TDI power plant was increased from 3.7 to four litres for the new car. After testing various energy recovery systems, Audi decided to compete in the class of up to two megajoules of recuperation energy at Le Mans. The energy exclusively flows through a motor generator unit (MGU) at the front axle and is stored in a flywheel energy storage system. “We opted for this concept following extensive testing,” says Head of Audi Motorsport Dr. Wolfgang Ullrich. “In our opinion, it provides the optimum balance between efficient energy use, size, weight, energy conversion efficiency, responsiveness, drivability and a favourable operating strategy – combined with durability, which is the basic prerequisite for success at Le Mans.”

On March 28 and 29, the Audi R18 e-tron quattro will be participating in the official test of the FIA World Endurance Championship (WEC) at Le Castellet (France) before World Champions Audi begins its title defence at Silverstone in the UK on April 20.