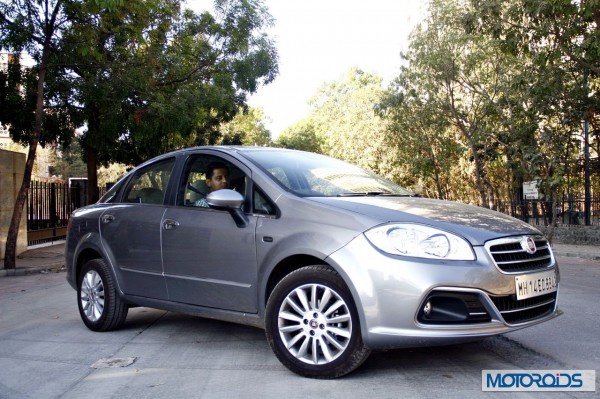 One may tend to think that Fiat Group isn’t doing too well in India, but the Italian carmaker is quietly resolute. The master small car maker may not be making much song and dance about it, but after its split with Tata Motors it has been working diligently on expanding and overhauling its sales and service network. The warehousing infrastructure, robust supply chain and human resource to support the next wave of Fiat products in India is being industriously prepared without creating much hullabaloo. With more than 100 exclusive dealerships already set up, Fiat is targeting the 150-dealership mark by the end of 2014. What they are planning and doing seems right, in a very long time, and that’s what makes us so positive on the new 2014 Linea, which we just reviewed.

The focus has been on overhauling the back-end, before attacking the market with new products. So after hitting a century with new dealerships, Fiat has decided to launch its first new (okay, facelifted) mainstream product after its split from Tata, and we’re pleasantly surprised to see the effort they have put into the face lifted car to bring it up to speed with competition. Here, in the New 2014 Fiat Linea Review, we’ll tell why this car has a fighting chance to claw back some of the lost ground. Read on! 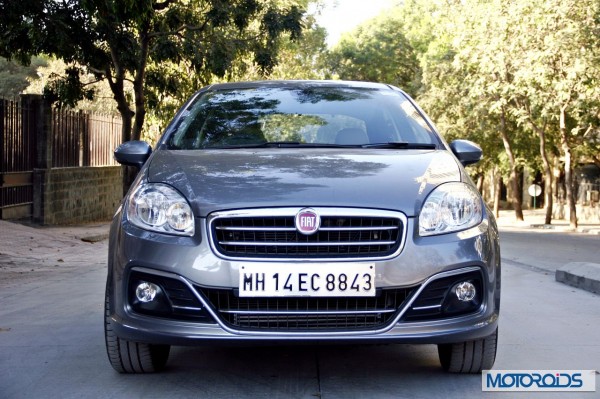 The classic clutter free, organic Italian lines of the Linea have always delighted the purists and lovers of simple design. While there is a bit of loudness on the Fiat Linea’s new face, it still thankfully manages to preserve its elegant essence overall. The longest car in its class has received quite a few modifications at the front / rear for a refreshed, renewed appeal. The new front grille, which has the bonnet ending on its top is has a chrome frame with twin chrome slats. The Fiat emblem is positioned between the top slat and the frame of the grille. 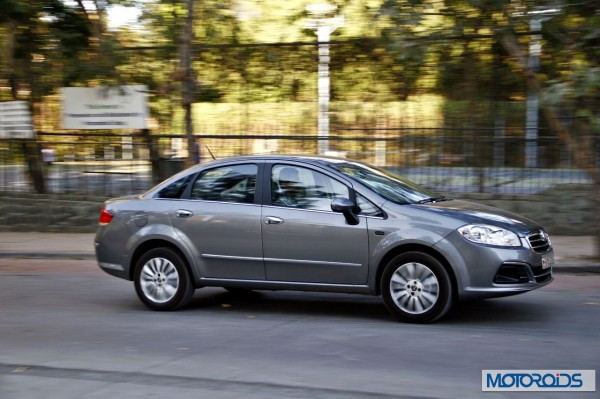 The front bumper as you would assume is new too, featuring a bigger central air dam with horizontal fins inside, intersected by a horizontal chrome slat. On the flanks you have big housings for fog lamps, again lined with chrome. Overall, the face of the new Linea is bolder and more attention seeking than the version it replaces. 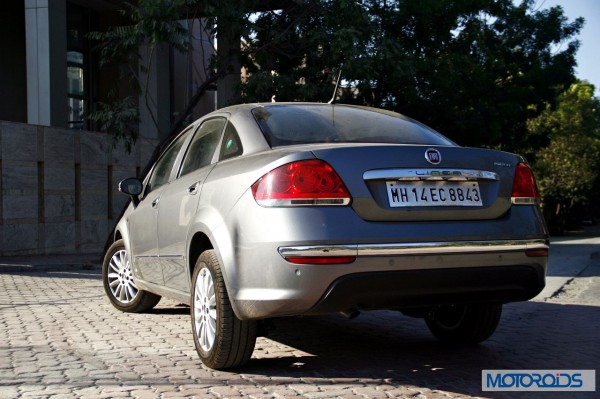 At the rear, the boot lid now gets a classy looking ‘Linea’ emblem in chrome on top of the license plate recess. The rear bumper is new too, with a horizontal chrome garnish and plastic under-cladding.

While those changes don’t alter the essential design of the Linea, the liberal splattering of chrome and smartly incorporated modifications have managed to raise the appeal of the car appreciably for the commoner.

Next page for interior and features>>> 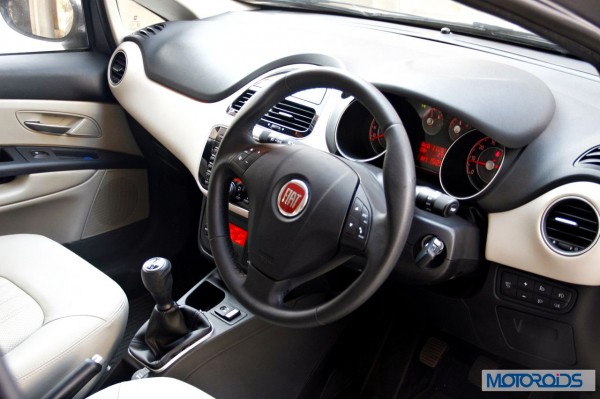 Quite a few changes have been made to the Linea’s interior to uplift the quality and features perception. The new interior is done in two-tone beige-black with a center control featuring piano black plastic. The brushed aluminium retro look of the center console has been shown the door in favor of a more contemporary design. The beige elements of the black-beige interior comprise of a new soft-touch material. 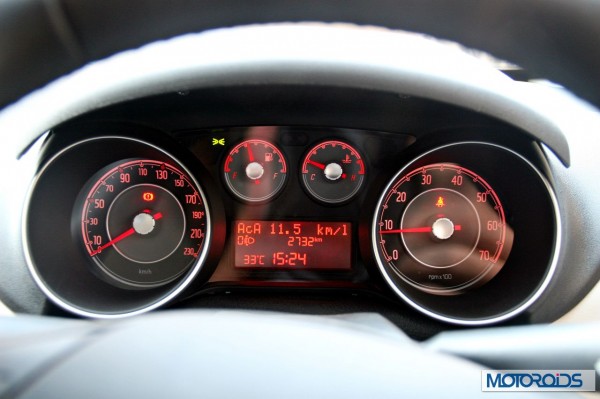 The instrument console while still the same unit functionally, has been redesigned with new black dials and modern looking markings, replacing the classic markings on the old version. Like the previous version, the MID offers useful information including average consumption and distance to dry, which is a very important feature for any car these days. 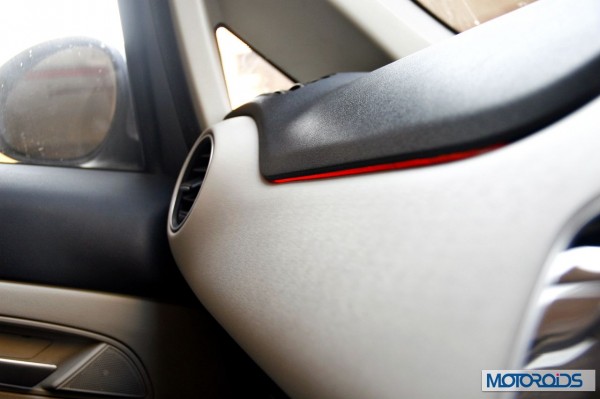 A new introduction to the cabin is the mood lighting, with a warm orange glow illuminating the area where the black and beige colors meet on the passenger side of the dashboard. The effect lifts the interior ambience significantly in dark. 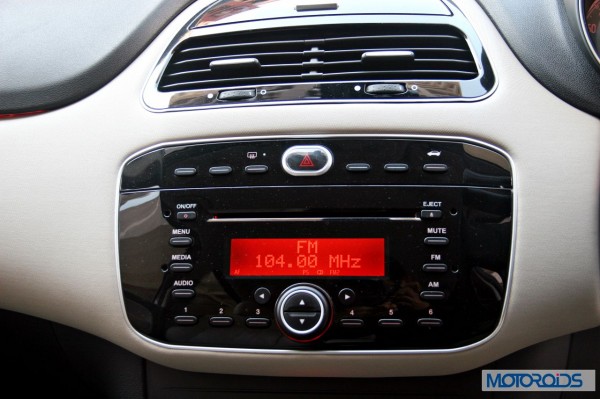 The center console has been changed as well, and is now comprised of piano black plastic with a redesigned audio unit. Functionally, the audio unit remains the same as the previous version though. There’s also a small compartment on top of the center console with a pop-open lid. 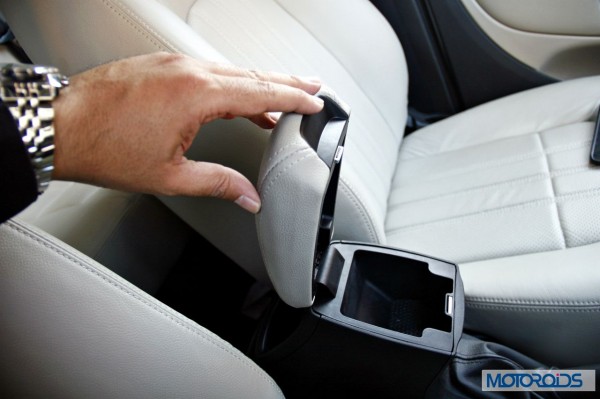 There is a small central armrest as well, with a very small cubbyhole beneath. We struggled to put even our cellphone inside, and would be surprised if it could be used for anything but coins and toll tickets. There are no big cup-holders between the seats, both front and rear doors have reasonably sized map pockets though which can hold water bottles. 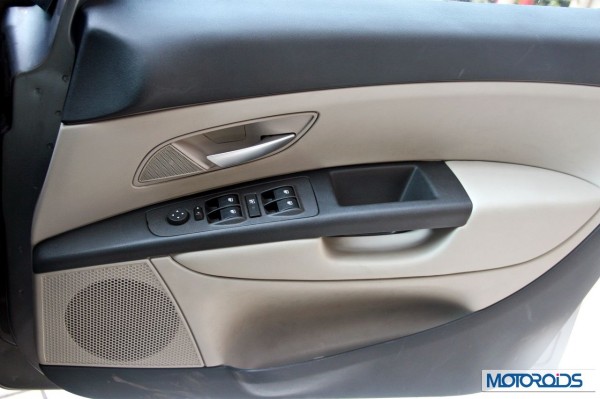 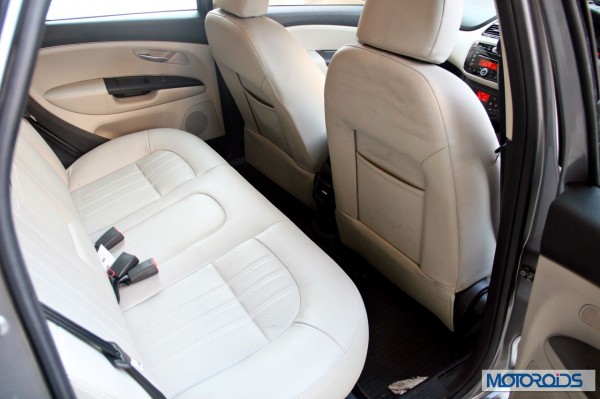 Back benchers get map pockets and bottle holders in their door pockets along with pockets in the front seat backrest. Backseat offers adequate legroom, though it’s not class leading. The seats in our top-of-the-line test car (Emotion variant) were covered in high quality, perforated leather. Rear sun blind is another new inclusion in the top of the line Emotion variant. 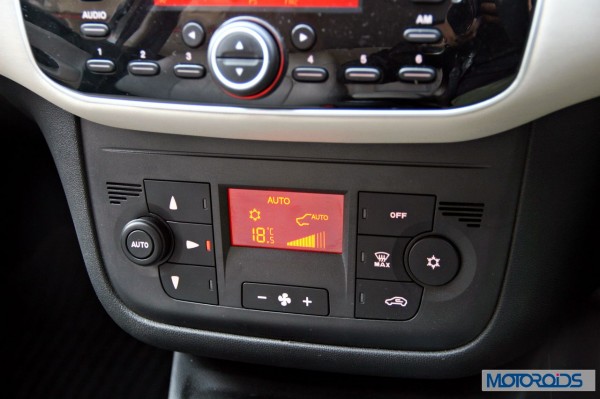 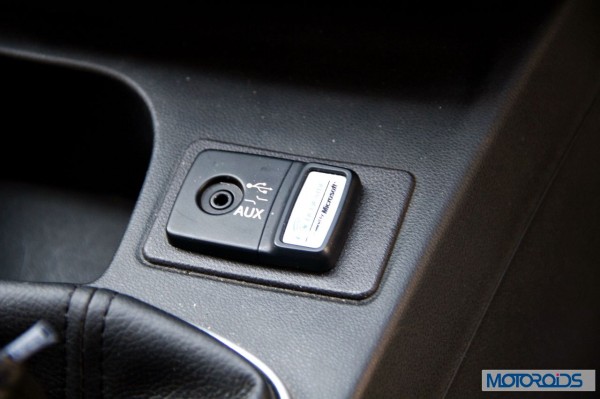 Linea remains a well equipped car and features like auto headlamps and wipers, along with the voice command driven Blue & Me system gives it some extra brownie points. Audio System comprises CD/Aux-in/USB/Bluetooth compatibility as well as AM/Fm radio. Sound quality is not all that great though, and raising the volume beyond a point leads to distortion in output. 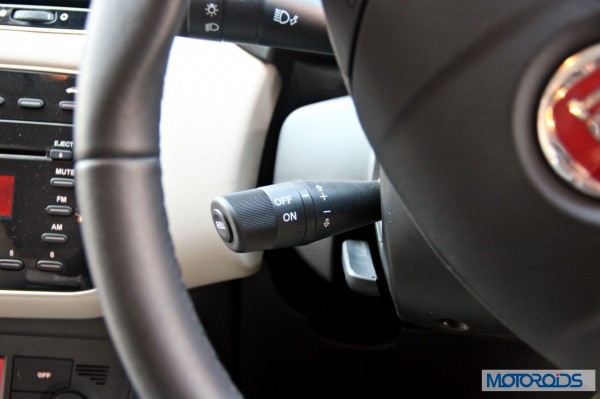 As a welcome introduction, the Linea now boasts Cruise Control. Though seldom used in Indian traffic conditions, the system most definitely adds to the appeal of a car. Other features worth a mention include a fire prevention system, reverse parking sensors and Follow Me Home headlamps. ABS and twin front airbags come standard for the top spec variant. As on the previous version, we liked the convenient position of the boot release button on the center console, but it can be difficult to spot for someone who’s driving the car for the first time. Boot remains cavernous as ever at 500 liters. 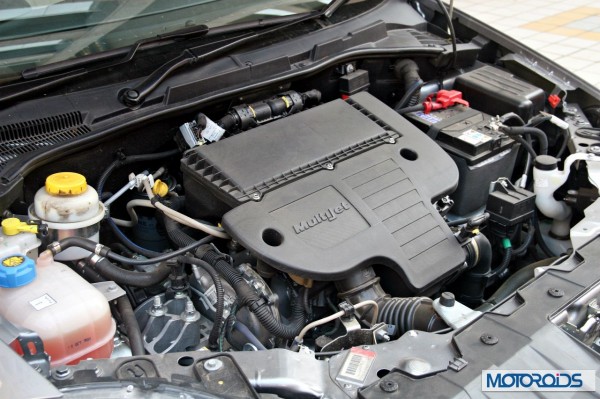 On the diesel front, the tried and tested 1.3 Multijet diesel, which is termed by many as India’s national diesel engine powering a multitude of cars delivers a practical oil burning option. Peak power for the engine is rated at 92 bhp @ 4000 RPM, while maximum torque is rated at 209 Nm @ 2000 RPM. With an ARAI fuel efficiency rating of 20.4 kmpl, the engine is quite efficient, if not the most frugal in class. Packing decent punch with good everyday driveability, the engine is very well suited to Indian driving conditions. It’s practical, even if a bit noisy above 3000 rpm. 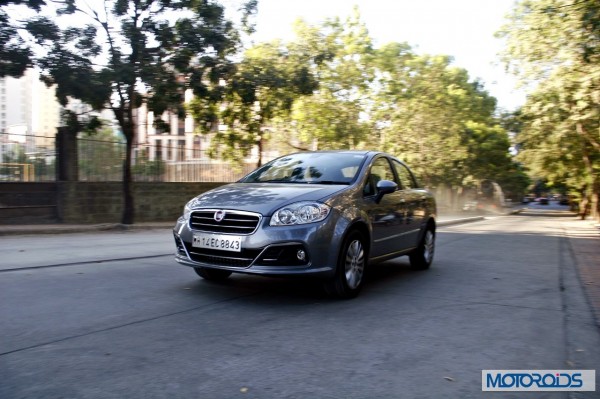 The 1.4 Multi-jet engine, on the other hand, remains one of the most exciting petrol engines in the mainstream segment with 112bhp of power and a tasty 207 Nm of torque. Coupled with Linea’s much applauded prowess in handling, this engine makes the T-jet Linea one of the most appealing of all drivers’ cars in its segment. The turbocharged T-Jet engine has an ARAI rate fuel efficiency of 15.7 kmpl 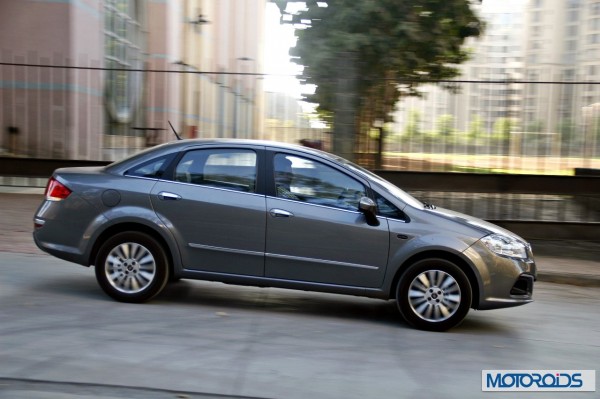 The ride quality of the Linea remains slightly firm. The firm feel of the ride quality gets even more pronounced with the rather firm cushion of the seats. There is a bit of bounciness to be felt at slower speeds, which settles down nicely as the sedan gathers speed. The Linea’s ride is at its best when it’s loaded with three to four passengers and at speeds above 60 km/h. The benefits of a firm suspension become more evident as you decide to attack corners, making the Linea emerge as one of the most delightful machines in its segment to have some fun with. The Linea rewards you with a great grip levels and very well contained body roll to make for an exciting driver’s car.

Next page for verdict and technical specifications>>> 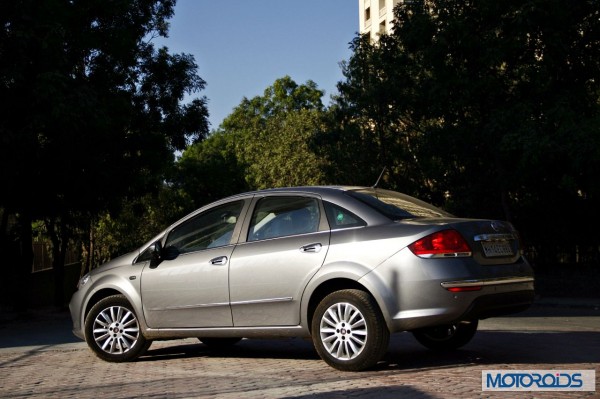 In its newest avatar, especially with its aggressive pricing, the Linea makes sense for the value seekers. It may not be the best package in its class, but is still a very well rounded product. Sturdy, classy, feature rich and fun to drive – the Linea has always been a very strong product. In the diesel variants, competition has more frugality and features on its side, but the competition more expensive too. As we mentioned, if you want a reliable, sturdy car which is built like a tank – the Linea makes a strong case for itself.

Brand Fiat took a drubbing with its unsuccessful partnership with Tata Motors, but the company is showing an unprecedented sense of eagerness to iron out all the sales and service related issues once and for all. In its new avatar, the Linea is offering terrific value. If you like driving, and want a car that’s high of features, fun and value, the new Linea is worth having a look at.

Next page for Image gallery>>>