An updated, 2019 Bajaj Dominar 400 is on the cards for a formal launch. Spotted testing undisguised a while ago, for 2019, the updated flagship will feature USD front forks, a new double decker exhaust canister and radially mounted front brakes, which will now be fitted on the left side of the wheel.

While this spy image from our reader Neelesh Bajaj confirms the addition of USD front forks, other changes the bike could be updated with, include, a different looking instrument console, which will provide more information to the rider than it did before. A new design for the rear view mirrors is also expected. It is being said that for the 2019 Dominar, Bajaj could also tweak the ECU to release a few more horses, and the SOHC setup could be replaced by a dual overhead cam to make the motor run smoother and enhance its levels of refinement. 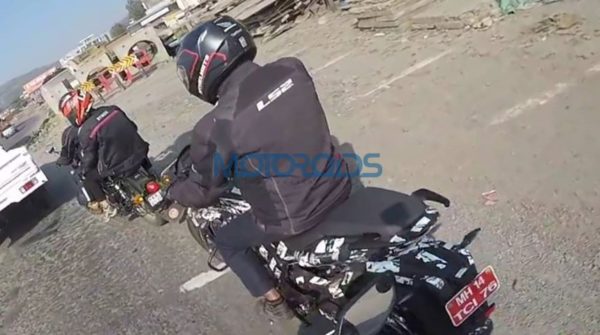 Also Read: Wanna Go Hyper Riding But On A Budget? GM Customs Converts A Bajaj Dominar 400 Into A Suzuki Hayabusa 1300

Certain other bits which could be introduced on the updated bike include a ride-by-wire throttle and enhancements to the cooling system. Ergonomics of the motorcycle could also be altered to make the rider more comfortable, where the seat padding and size can be enhanced, and the handlebar’s position could be moved to allow a relaxed riding position. All this, so that the rider can cover longer distances with less fatigue.

The new exhaust system is said to include an inbuilt catalytic converter, which was earlier placed under the engine. As a result, the 2019 Bajaj Dominar could boast of a higher ground clearance number, while how it sounds, is something we’d only know once the actual bike comes out.

We expect the 2019 Dominar to hit showrooms sometime early next year. Also, there have been rumours about Bajaj working on different variations of the Dominar platform, one of which is a Scrambler. However, nothing of that sort has been spotted testing or otherwise, yet. We’ll come back with more updates as and when they arrive. Stay tuned!