Modernization has become one of the key elements of evolution. Our nation too has started treading the modern path towards seeking development. There are certain benchmarks and global standards that we follow to introduce modernization to our different departments. Though you wouldn’t classify the Indian Police Force as particularly modern but some recent developments suggest that the authorities are trying hard to match the global standards. As a part of the same process, Mumbai Police on Thursday expanded its fleet of segways to patrol seafaces and promenades in the city, as part of its efforts to ensure safety and security at tourist spots.

State Home Minister Anil Deshmukh inaugurated the first 15 of the 50 segways, self-balancing electric scooters equipped to carry one person, at Marine Drive. Mr. Deshmukh said, “While the deployment will begin with 10 segways at Worli, and five at Nariman Point, we eventually plan to deploy these latest self-balancing electric scooters at Bandra, Juhu and Versova too. The Home Ministry is keen on the modernization of Maharashtra’s police force and wants them to be equipped with technology on a par with global policing standards.” 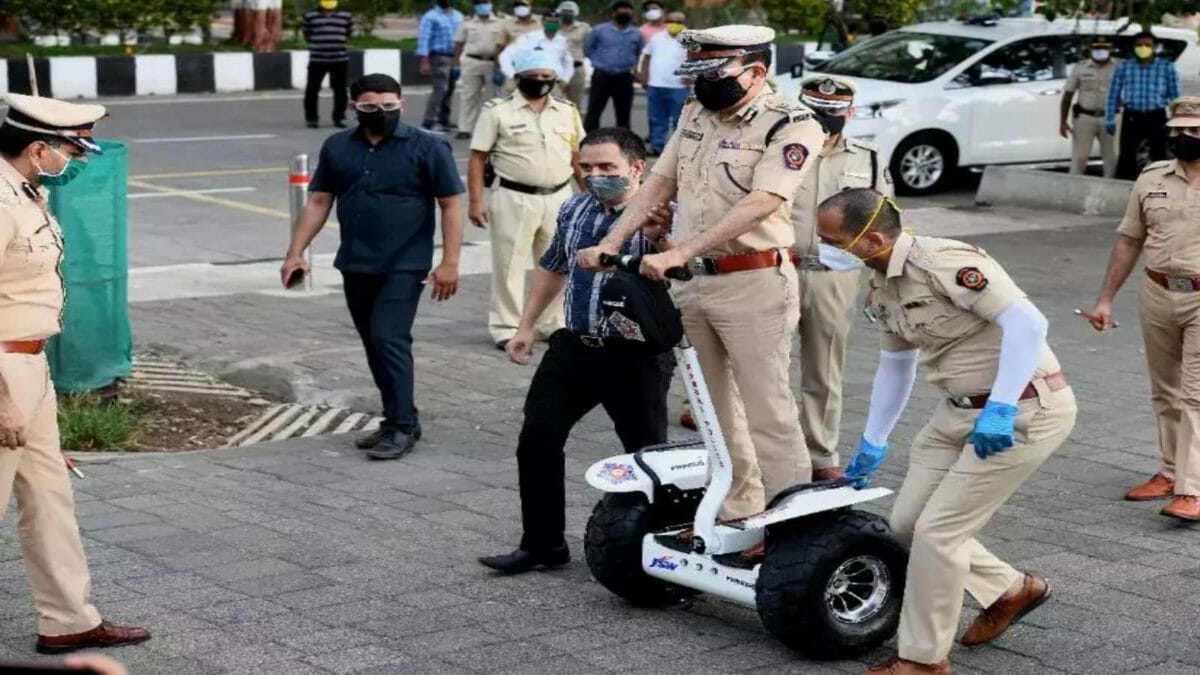 Police personnel manning the segways will be provided with face masks and equipped with public address systems. “Apart from ensuring safety and security in these times of the COVID-19 pandemic, they will also monitor adherence to social distancing norms. Drones will provide additional complementary cover to the police personnel on segways,” Mr. Deshmukh said.

Segways were first added to the police’s fleet of vehicles on an experimental basis in 2017, with two segways being pressed into service. Subsequently, the number was increased to nine, with five segways deployed at Marine Drive and four at Worli. The recent deployment of these electric self-balancing vehicles has sparked a debate on Twitter that whether it was necessary at the moment or not.

Some hailed the state government, while some questioned the need for those the scooters, slamming the government for such an unnecessary expenditure. One user said, “How many policemen patrolling one small stretch?” Another user said, “First make best quality roads where Segways can run and stop this redundant expenditure and commission on awarding contracts.”

More information on the Segway

We currently don’t have any information regarding the exact model that has been deployed but the standard  HT i180 has some interesting specs. It can achieve a top speed of 20 kilometers per hour which is about three times of typical walking speed. The standard model weighs just 38 kg and takes much lesser space than say, a compact motorcycle. It will certainly help the police force to move in tight spaces and crowded tourist spots like the Marine drive.

The standard model has a weight capacity of 118 kg and can travel 28 km on even ground with a single charge on a lithium-ion (Li-ion) battery. The Segway has a small LCD screen that tells the driver how much battery power is left and how well the vehicle is functioning. The screen displays a cartoon face, which expresses the general condition of the vehicle. Each of the Segway’s wheels is driven by a 2-horsepower electric motor that produces no emissions.