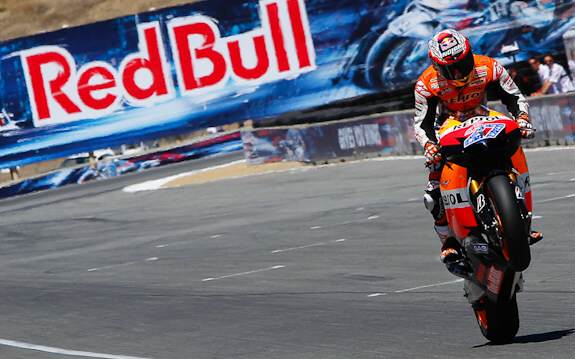 Casey Stoner managed to overtake pole position starter Jorge Lorenzo to take the top podium spot at Laguna Seca. Lorenzo led the race, with Stoner behind team-mate Pedrosa and gathering speed with every lap. He passed Pedrosa on lap 18, and went past the race leader in the 26th lap.

There was no looking back for Stoner after that, and the gap between the Repsol Honda and Yamaha factory rider kept on getting wider and wider. The Aussie managed a five and a half second lead over the Spaniard as he crossed the finish line. Dani Pedrosa finished in third position.

Valentino Rossi is having one of the worst MotoGP seasons in years, and the situation doesn’t seem to be improving much. The doctor was overtaken at Laguna Seca, and finished in sixth, ahead of team-mate Nicky Hayden.