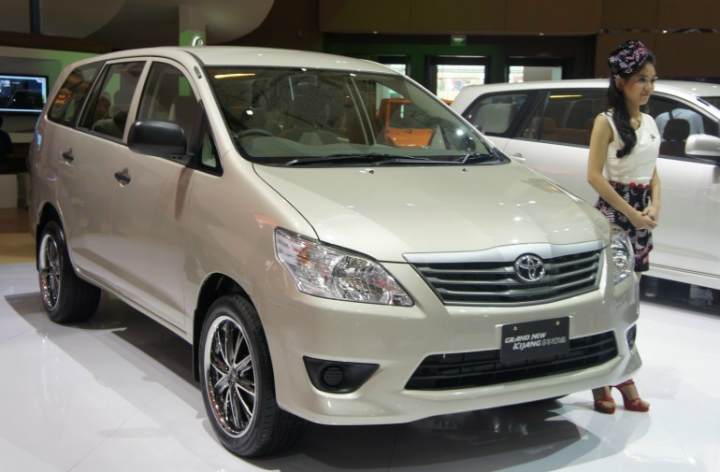 Toyota has officially introduced the Innova Face lift that we have been talking about quite some time at the 201 Indonesia International Motor Show. As expected the new generation Innova isn’t a major overhaul, but more of a cosmetic upgrade with some nice features thrown in.

To start with, the face lifted Innova gets a new face with entirely new headlamps. The smoked out blck edges of the current version are replaced new units with a swept back design and three translucent fins on the end. The radiator grille is new, with less chrome, an added slat and titanium finish for the slats below the top one which still is done in chrome. The creases on the bonnet too are new.

The side profile remains unchanged except for the fact that some portions of the A, B and C pillar are now done in body colour, unlike earlier when they were black. The rear end too doesn’t witness any major change except for the colour order of the tail lamps. The shape still remains the same.

The steering wheel has been redesigned. We are not sure whether the earlier version of the Innova in Indonesia had steering mounted audio controls, but the new one does, for sure. The feature may be introduced to the Indian market too, when the car is launched here in early 2012.

The pictures also show an automatic variant of the Innova, and while there may not a big demand for the auto tranny in the segment that the Innova resides, it would be nice to have an option. After all, if Mahindra can offer an auto transmission for their Scorpio, the Toyota can, and should too.

As mentioned earlier, expect an Indian entry early 2012. Expect the prices to remain unchanged. Find below more pictures of the facelifted version. Thanks to Paul Tan from Indonesia.