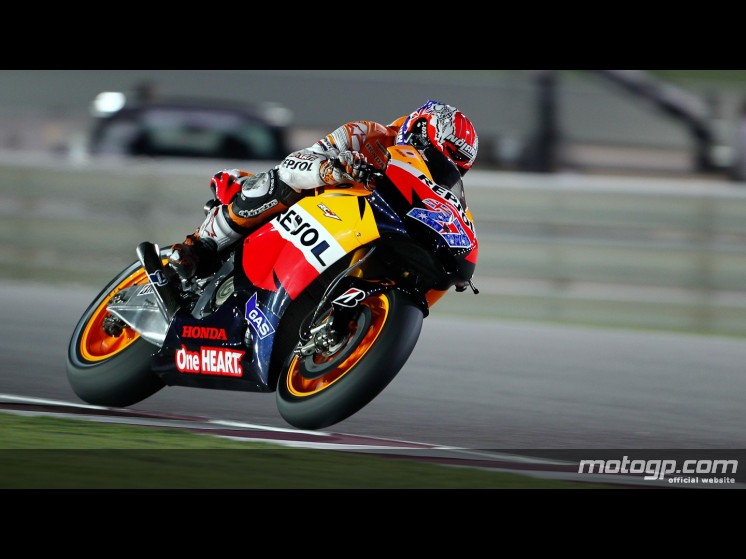 The three Friday free practice sessions for MotoGP 2011 are over. Apart from the main MotoGP class, we Indians also have two strong reasons to be interested in the results of the 125cc class well. First is the fact that we have a full fledged factory backed Indian team running in MotoGP with the name Mahindra Racing. The second reason is Sarath Kumar, the first Indian to be racing in a MotoGP event, with the backing of Ten10 Racing of India. Let’s start with the MotoGP class results.

The first three free practice sessions suggested that Casey Stoner is looking like the strongest Championship contender this time around. The Aussie consistently topped the charts in all three practice sessions. He was followed closely by his Repsol Honda team-mate Dani Pedrosa throughout.

Jorge Lorenzo finished in ninth, fifth and fourth positions respectively, improving his time in every session. Rossi, on the other hand slipped from fifth in the first session to ninth in the second, before climbing up one notch to finish the session in eighth place.

Ben Spies (Yamaha), Andrea Dovizioso (Repsol Honda) and Marco Simoncelli were some of the other names which dominated the top order.

Apart from the top two Honda riders Casey and Danny, the rest of the positions seem to be offering a level playing field. Qatar could be anyone’s game, we just have to wait and watch. We’ll bring you the results from the Saturday practice session too, so stay tuned.

In the 125cc class, India’s Danny Webb and Marcel Schrotter performed reasonably well too. While Danny finished all three sessions in 16th position, Marcel kept improving his performance to finish in 22nd, 21st and finally 15th position above his team-mate.

India Sarath Kumar, supported by Ten10 and running much inferior equipment, consistently finished in the last position throughout the free practice.