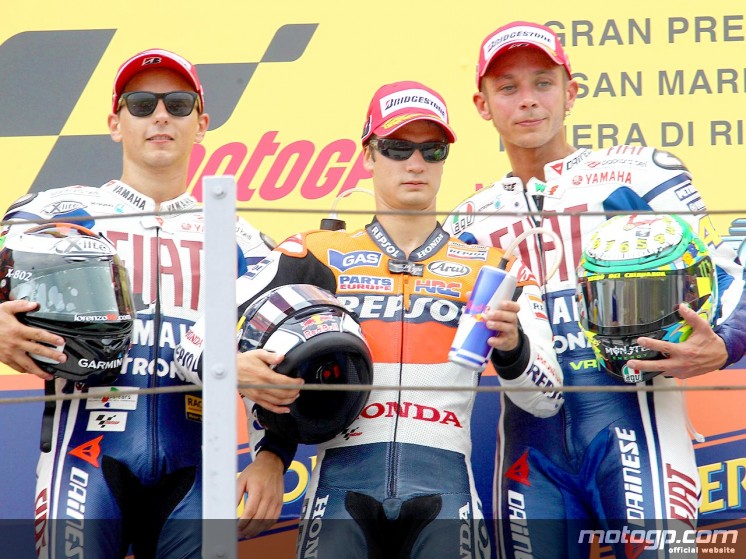 The world of motorcycle racing witnessed a terrible incident when Japanese rider Shoya Tomizawa died in a major crash during Moto 2 race. Tomizawa aged 19 suffered a serious crash and subsequent cranial, thoracic and abdominal trauma. Given the seriousness of his condition – especially for the thoracic and abdominal trauma – Tomizawa was immediately treated at the Misano World Circuit medical centre and put under artificial respiration. The rider was taken by ambulance to the Riccione hospital accompanied by two doctors – helicopter was not used in order to allow for the proper respiratory support to be administered. Despite various attempts to resuscitate him Shoya sadly succumbed to his injuries.

Later Repsol Honda’s Dani Pedrosa claimed his second consecutive race win with a well deserved victory over Fiat Yamaha’s Jorge Lorenzo at Misano. This was Pedrosa’s fourth win of the season and the first time in his career that he has managed to win back-to-back races. Lorenzo continues to lead the championship over Pedrosa, who has narrowed the gap to 63-points thanks to his effort in the last two races. Still, Lorenzo is in control of his own destiny with six races to go.But overall mood in the paddock was very sad.

“I don’t have many words for the race on such a sad day,” said Lorenzo. “I made a good start but I couldn’t keep close to Pedrosa. Second is good, we aren’t fast enough but for the championship it’s another very important result and that is our target. The podium is our goal in all races, although we hope we can still improve our M1 a bit more. As for Shoya, it’s a huge pity because he was a good guy and a strong rider. I am so sad and I just want to say how sorry I am for his family and his friends. When this happens, nothing else matters.”

Fiat Yamaha’s Valentino Rossi rounded out the podium as the top finishing Italian rider.
“This was a great result for us, more than just for the podium but for the way that the result arrived,” explained Rossi. “I was very fast at the end of the race and this shows how much we’re improving because I was able to keep pushing right to the end. I think we did a good job this weekend.”

Things didn’t go well for Marlboro Ducati’s Nicky Hayden. The Kentucky Kid tangled with Rizla Suzuki’s Loris Capirossi, who was making his 200th start in the premier class. Both riders would DNF.

“I am very angry at what happened today because I was feeling very confident and the bike was good, so I thought we could have a competitive race,” Capirossi said. “Now I have to have an operation and I hope I can be back for Aragon, but this is nothing compared to what happened in the other race. I want to send my condolences to Tomizawa’s family, this is a great tragedy and something that you never like to hear about.”