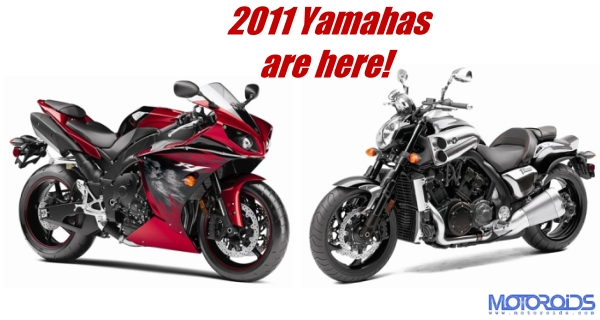 Yamaha has released images of their 2011 line-up last evening. We say ‘images’ because there is nothing new as far as the mechanicals go. The 2011YZF-R1 has a new paint scheme for Yamaha’s trademark blue. Also added in the line-up is a wine red colour option with some skull-themed graffiti on the side panel. The raven-black stealth paintjob has made a comeback for 2011. The V-max too gets a new shade in the form of silver. The 2010 model was only available in black and red shades.

Click on the image to view the Hi-Res Gallery

From what we are told, Yamaha India lies ninth of the list of markets for the Japanese bike maker so don’t expect these colour schemes to come to India anytime soon. While these 2011 models will go on sale in the US and UK by December 2010 / January 2011, India will get the new models by April 2011. We are in love with the new red paint scheme and though we would like to see that R1 on the road soon, we are hoping that Yamaha would summon all these new paint jobs for the 2011 YZF-R15. Gallery and Wallpapers on the next page>>>