Few minutes back, we brought to you images of a tastefully modified Royal Enfield from Pune based Dochaki Designs. (CLICK HERE for this post) Like we said earlier, Dochaki Designs is a Pune based bike customization group from Anupam Singh Parihar. It has only been some months since Dochaki Designs have been in business and already, they’ve come up with a some beautifully customized machines. In this post, we will talk about Daksh, a modified Suzuki Fiero Cafe Racer from this young design group. Now, a Suzuki Fiero comes across as an usual choice as a base to build a cafe racer. However, the very fact that Dochaki has managed to pull off this mod job quite neatly speak about their customization prowess. (Have a look at that trimmed front mudguard, low set handlebars and ever so slightly upswept exhaust) Here are some images of this modified Suzuki Fiero Cafe Racer —

Here’s what Anupam says about this Suzuki Fiero modification —-“Daksh is based on a first generation Suzuki Fiero. It was made in just seven days. We call Daksh a cafe fighter. Café Fighter is the class of Motorcycle which includes the design cues and attributes of a Café Racer and a Street Fighter Bike. It  has a long fuel tank with a dent on it, small single seat, and narrow handle bars in line with the Classic Café Racer concept. Along with this the aggressive stance and high rise riding position with sharp feature lines of a Street Fighter Motorcycle has been incorporated to make it more contemporary. All these attributes are designed to make this bike agile and prompt in city traffic still giving the feel of an old café racer classic.” 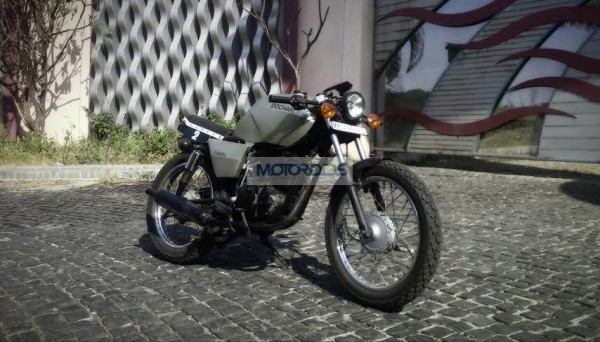