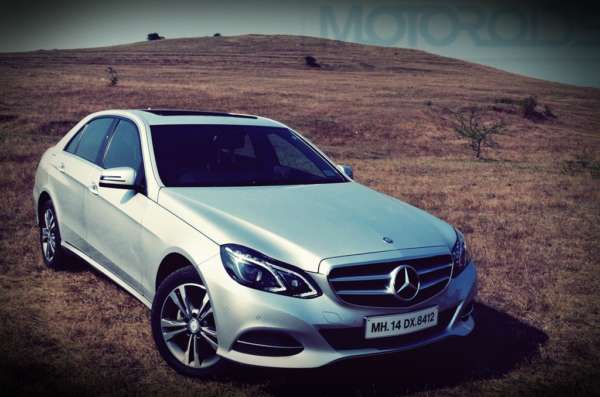 Earlier this year, Mercedes India launched the updated E Class in the country. Equipped with a comprehensively revised front end and a plethora of new features, the latest facelift for the E Class is definitely not your mundane nip and tuck job. Rather, it is a fine example of how a manufacturer should go about rejuvenating a car mid-life.

We were quick to drive the lethal E63 AMG (Click for review) and the frugal E250 CDI(Click for review) and these variants of the refreshed E left us mighty impressed. Recently, we also drove the E200 petrol variant to find out if the entry level E Class variant is as polished as the diesel variant and at least a fraction of as fun as the very tasty AMG model. We spent an entire day with the E200, driving it through the maddeningly crowded streets of Pune and on winding roads of Lavasa. Here is a report on the new E200, which should answer all your questions about the entry level model in the E Class line up. 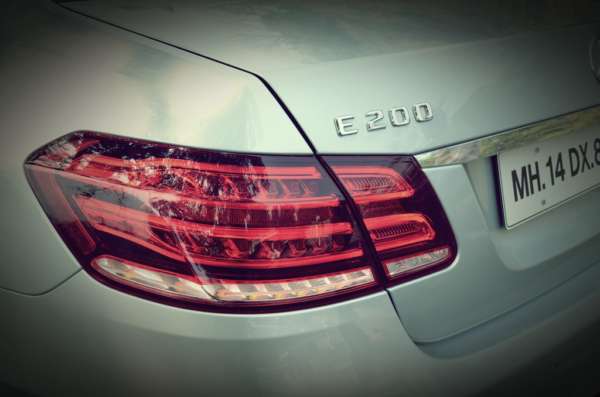 The new Mercedes E200, at INR 41.50 Lakhs (ex showroom), is a whopping INR 4 lakhs cheaper than the E250 CDI AvantGarde and full INR 8.5 Lakhs cheaper than the Launch Edition we drove earlier. While we do agree that petrol prices in our country are already high enough to make even the proverbial ‘well heeled’ wince with displeasure, it needs to be taken into account that not all of us have the kind of usage that would warrant a diesel powered car. Also, with diesel prices being de-regulated, it is only a matter of time before the stickier fuel becomes almost as pricey as the unleaded liquid, and hence, the fuel-cost advantage might soon vanish in thin air. Hence, for someone whose car-usage doesn’t justify spending extra on the diesel model, the equally loaded and sufficiently potent petrol powered variant makes a lot of sense!

Quite convincing, that! Do you say that the cheaper petrol variant looks the same as the diesel one?

Well, almost. The car boasts of similar twin-slat front grille, same DRL equipped headlamp units, and similarly shaped twin exhaust pipes at the rear. However, the E200 misses out on the blacked-out roof and sports a different set of alloys, which we ended up liking more than the ones on the E250 CDI Launch Edition. Apart from these two differences, there is little to differentiate between the two variants and only those who  have an eye for detail would be able to tell apart a petrol variant from the top-of-the-line diesel model. 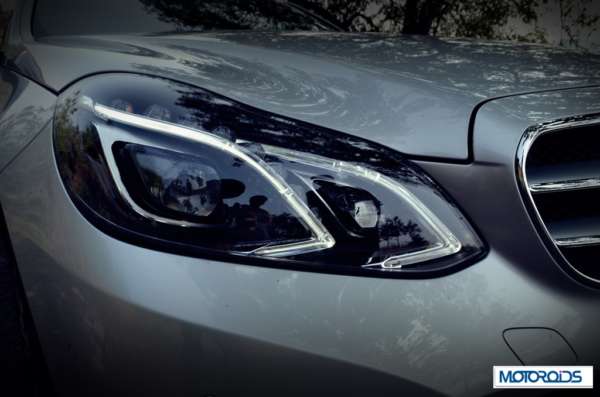 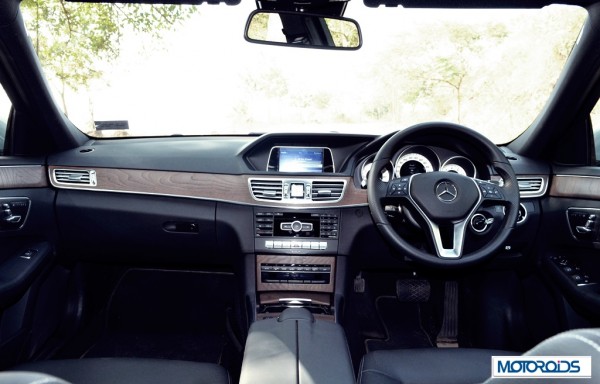 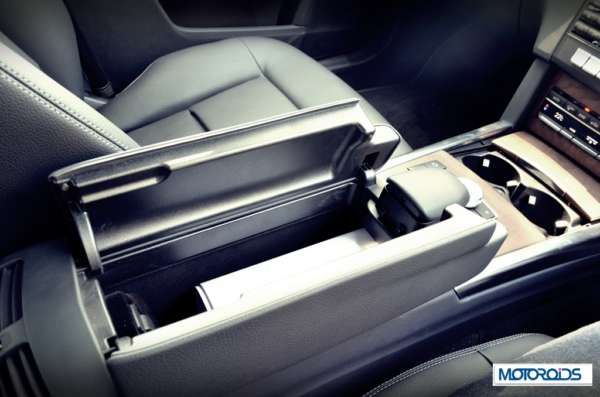 The interiors are highly practical and come with several cubby holes and spaces.

Does it lack on the equipment-front?

Hardly! Rather, the E200 is pretty well endowed in this aspect and comes loaded with all the gizmos you would expect in a mid sized German limo. Equipment on offer includes Electric seat and steering adjust, Harmon Kardon in car entertainment, bluetooth connectivity, parking sensors, eight airbags, sunroof, and three-zone climate control.

Gizmos that the car misses out include reverse camera, sat-nav and the E200 comes with a smaller screen for the COMAND system.

Okay, enough about the features and equipment. Can we talk about the engine and transmission? 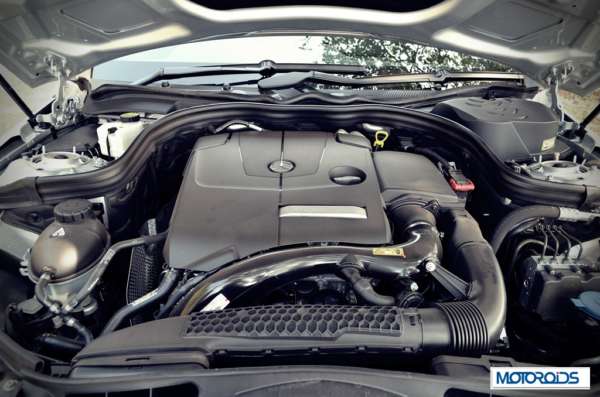 The Mercedes Benz E200 is powered by a smooth and responsive 2.0 litre, four pot, direct injection, turbocharged engine that has a decent max power output of 181bhp and thanks to turbocharging, churns out a peak torque of 300Nm. All this is sent to the rear wheels via tried and tested Mercedes 7G-TRONIC seven speed automatic transmission that ensures smooth, seamless shifts.

The transmission offers two driving modes- ECO and SPORT. The ECO mode is apt for most driving situations and upshifts early to keep the revs low, thereby boosting fuel efficiency. The SPORT mode on the other hand comes in handy when you’re being your boy-racer self and lets you make the most of the decent torque spread by holding onto each gear all the way up to the redline, marked at 6500 rpm. Worth a mention here is that the E200 comes equipped with paddle-shifts, which make the entire experience of high-speed driving all the more appealing. 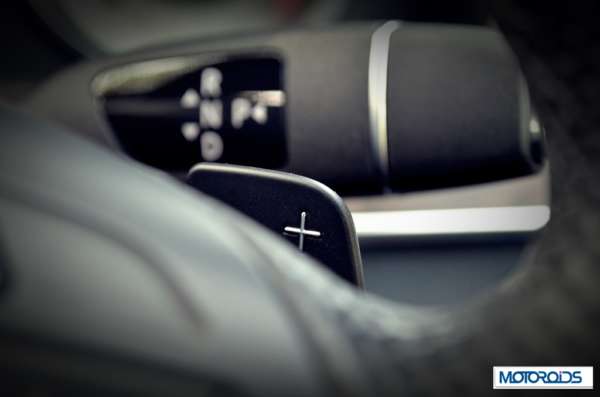 The engine is sufficiently powerful to endow the E200 with brisk acceleration and enable it to reach to speeds north of 200kmph. The low rev response, and torque spread is appreciable too for a petrol, and there is ample torque available even at sub 1500 rpm levels, making the E200 CGI a great low speed city machine as well. In gear acceleration isn’t as brisk as the diesel, due to the massive (200Nm) torque differential, but this still is a Merc and will be quite a handful all the lesser machines which you will overtake without breaking a sweat.

Top end performance, while good for all practical purposes and more, isn’t quite in the league of the E350CDI. After delivering a solid low and mid range performance, the E200 tends to gasp for air a bit  towards the upper end of the rev spectrum. 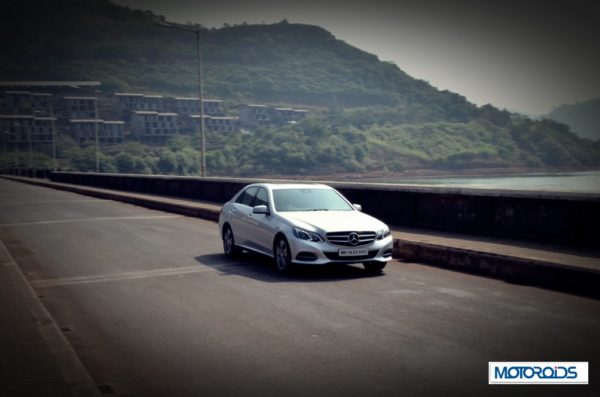 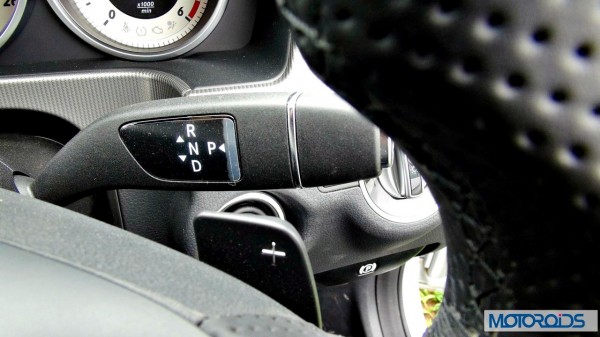 The positioning of the Drive Selector Stalk leaves you with an issue to complain. As we have mentioned in the past as well, this stalk, which finds itself located behind the steering wheel and not between the seats, isn’t really ergonomically placed. For those who aren’t used to selecting drive modes from behind the steering wheel, it may lead to the car ending up in neutral, as he mistakes it for the blinker stalk.

What about the handling and ride? Is it fun enough to go corner-carving in? 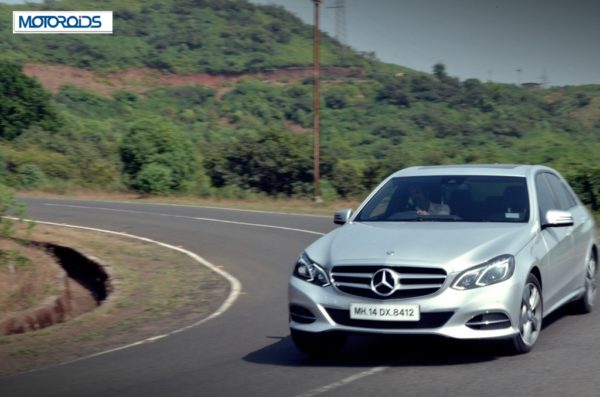 As we mentioned in our previous review, the new E-Class is a significant improvement over its previous version as regards handling. The E250 CDI surprised us with its substantially better poise over the predecessor, and the E200 CGI is no different. It holds its line very well, even while undertaking sweeping curves at high speeds. It’s solid as a rock in a straight line, and exhibits body roll only when pushed to the extreme around sharp bends.

While the handling has improved, making the E-Class a whole load more fun as a driving machine, the ride quality is the E200’s real forte! The E200 can tread on most of the broken patches of roads without breaking a sweat and the undulations are hardly ever transmitted to the occupants. Overall, the E200 CGI boasts of a really plush ride quality that will keep its owners, who will most likely be chauffeur driven, very comfortable and happy.

While very well balanced and head and shoulders above any of the regulation cars, the E-Class is inclined a bit more towards comfort and isn’t the ultimate corner carving tool. We would have liked the steering to weigh up a bit more at higher speeds. The wide, comfortable seats impress with their support and design in normal driving conditions.  While hurtling the car around the ultra sharp twisties of Lavasa, however, we felt that a bit more bolstering would have augmented lateral support. 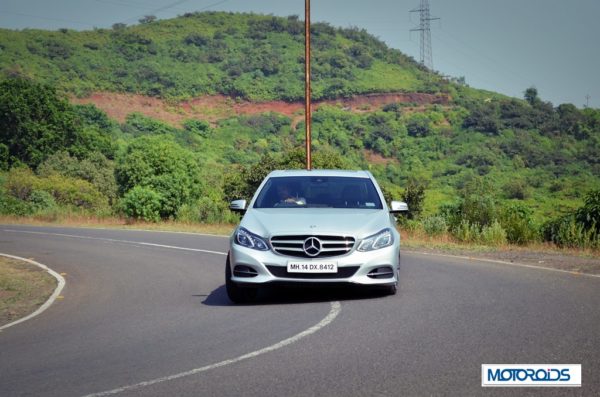 So what’s your take on the Mercedes Benz E200 petrol? 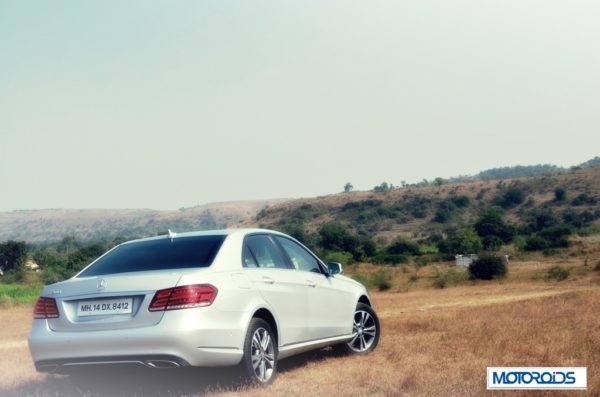 Overall, the E200 manages to impress us. Firstly, there are the refreshed looks, which seem to have infused a sense of freshness into the car. Further helping the E200 win brownie points is its ride quality. It’s improved a lot in the handling department, and with the steering mounted pedal shifters, is quite a tool to enjoy around windy roads.

For the extremists, though, the top of the rev range may disappoint a bit. We also missed a rear view camera on such an expensive car. However, you still get a lot of car for the money you spend and thanks to its fabulous looks, excellent ride quality and refined engine  the E200 makes a very strong case for itself.

What really works in the E200 CGI’s favor is the fact that it’s the most economical sedan in its class to own, with a price advantage of about 4 lakhs from the nearest competitor. At roughly about Rs 42 lakh,the E200 CGI, presents itself an incredibly good proposition for the value seekers.