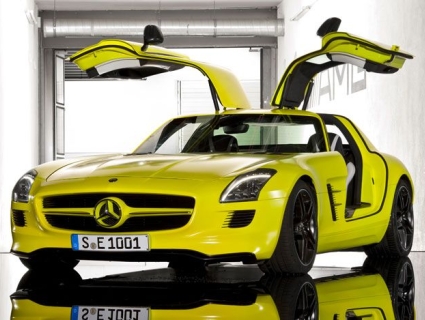 Mercedes Benz has unveiled a small taste of their new Mercedes Benz SLS AMG E-Cell Concept almost a year after revealing the plan of a fully electric vehicle of its supercar. The SLS AMG E- Cell concept is loaded by four electric motors positioned near the wheels intelligently to make it a four wheel drive model replacing the standard SLS AMG’s 571hp 6.3 litter V8 petrol engine. The four electric motors are powered by lithium- ion polymer battery modules which are placed in the center tunnel just behind the two wheels. Power churned out is slightly lesser than its petrol- powered sibling but still manages to produce an impressive 526 hp and blasts to the 100 km/h mark in just 4 seconds.
To keep the electrical components cool, the supercar hosts two cooling circuits, an extended front apron to assist airflow under the body and an extendable front splitter that can be controlled by the driver. On the outside, the vehicle features the bright ‘AMG lumilectric mango’ paint job, a wider front grille, LED headlights, new air outlets on the bonnet, optional ceramic composite brakes with sizes 18.5 inches up front and 14.2 inches at the rear and 19 inch front wheel and 20 inch rear wheel with 265/35 tyres. The interior features an AMG instrument cluster providing information regarding speed, charge status and estimated range. It is also equipped with new touch- screen infotainment system that is capable of displaying the flow of power from the four electric motors in addition to operating audio, climate and navigation functions. Mercedes Benz hasn’t confirmed when the prototype will enter the production house but it is believed that the super car could be available in a limited number of units by 2013. Check out the promotional video of the SLS AMG E-Cell:
News
,
Comments
Leave a Reply Cancel reply