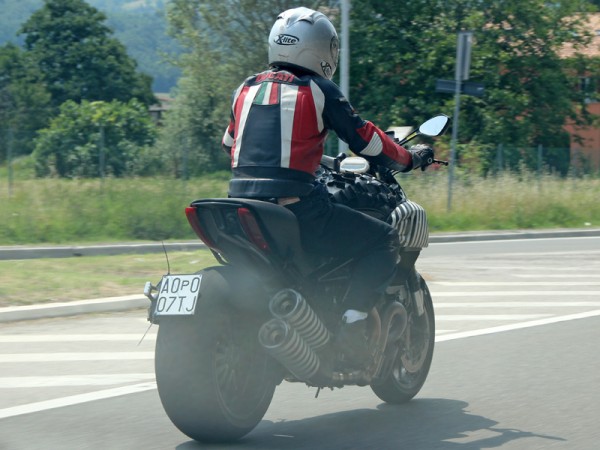 Italian motorcycle blog MotoBlog has shot the spy pictures of the latest under-test machine from Ducati. The bike boasting monstrous proportions, and designed to rival the Yamaha Vmax has been spotted around the company’s Bologna factory.
We earlier heard about this bike last year when MCN reported the development of such a machine. Little has emerged after that piece of info, so it’s a little difficult to comment on the engine and specifications. However, if the size of the new machine is something to go by, the B-Kings and the MT-01’s of the world have something to be scared of. From whatever little that has emerged on the web after the pictures came out, it seems the bike will sport a mammoth V-twin, caged by a Ducati Trellis Frame with single sided swing-arm. The pictures were taken when the test riders took the two machines on the road flaunting its enormous twin LED vertical lamps and side exhausts.
We don’t expect this bike be worth anything for the track addicts or handling lovers. However, we seriously think that with this machine Ducati will try and challenge the supremacy of the big, bad Vmax in a straight line. Expect the bike to hit the showrooms later this year in Europe.