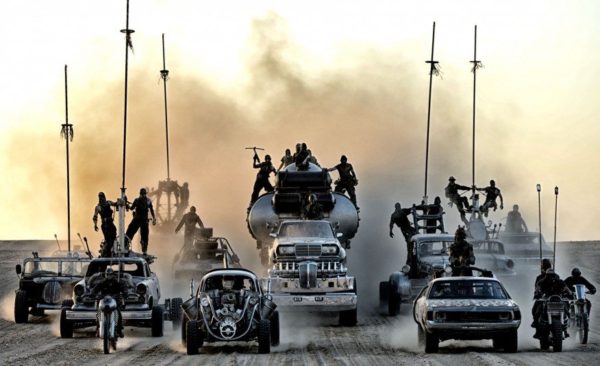 Mad Max is back! The George Miller directed franchise has all along featured fictional, boorish vehicles traversing the post-apocalyptic carcass of earth in the not-too-distant dystopian future. The latest instalment, dubbed as Mad Max : Fury Road, scheduled for a May 15, 2015 release, comes after three long decades since the last chapter (Beyond Thunderdome) came out in 1985. This time around, it won’t be starring Mel Gibson as Max, but instead it’s Tom Hardy’s turn to play Rockatansky , who joins Furiosa (Charlize Theron), a fugitive imperatrix, and her band who are all trying to escape a savage warlord. And while previous Max movies were filmed in the Australian outback, this one was shot in the heat stricken, arid wastelands of Namibia.

Back to the vehicles, Fury Road doesn’t disappoint either, with almost 150 bad-ass vehicles being conceived for the movie. Of the lot, here are ten of the most significant, heavily mutated, beat up vehicles that this imaginary cacatopia has given birth to. Being laden with machine guns, hatchets and spikes are common-fare. 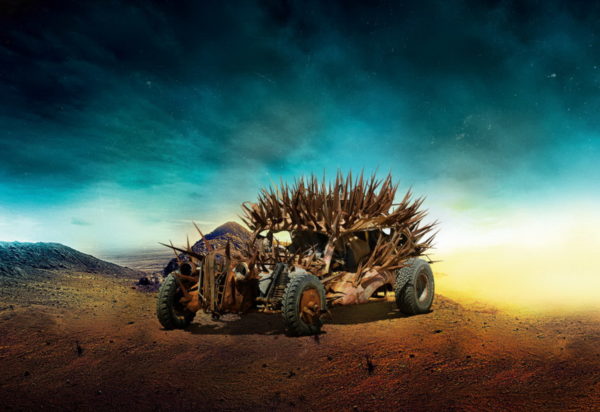 The Rock is a metallized porcupine born out of a decayed Plymouth sedan from the late 1930s. Bedecked with  rusty spikes, it crucifies anything laden with flesh. 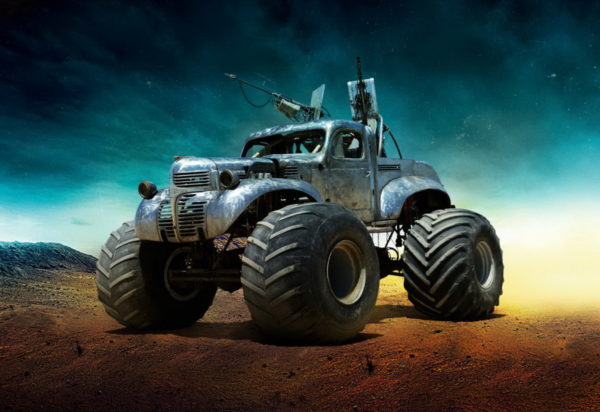 Named after the abominable snowman, The Big Foot is a monster truck with the body of a Dodge based Fargo truck from the late-1940s. It rests on on 66-inch-tall Goodyear tires, features four feet of suspension travel, and is powered by a supercharged V-8 engine mated to a Turbo 400 automatic transmission. Those massive axles are purportedly lifted from a military tanker. 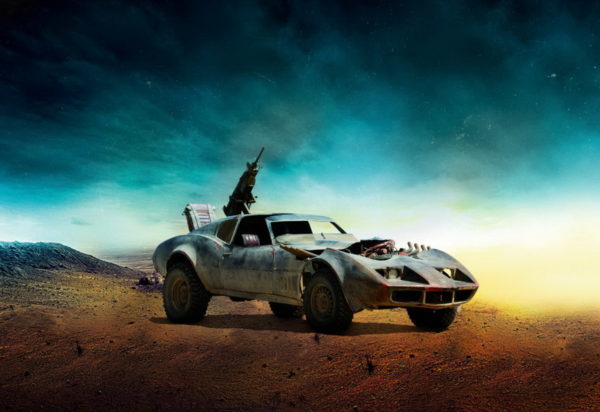 Buggy #9 is fibreglass C3 Corvette body stretched by 22 inches, sitting on a chassis of a Holden one-ton truck. Built by a Sydney-based company called Custom Performance Modification, this Corvette on steroids pays homage to automotive Americana, in the midst of post-apocalyptic, Australian wastelands. 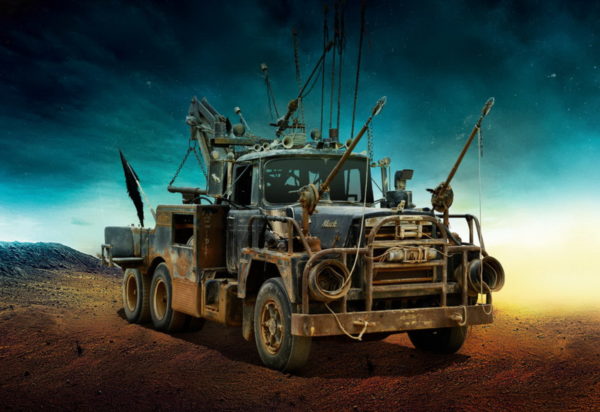 Large trucks, or road trains are synonymous to the Australian outback. These behemoths barrel down the length and breath of the massive continent, catering to the  population, most of which is concentrated along the coasts. So it’s doesn’t come as a surprise when the latest iteration of the Mad Max series throws in a Mack or two. Featured here is the The Road Warrior or the “Mack”, an R-series tractor-tanker tasked with trailing the action and scavenging the battlefield for precious scrap and equipment. 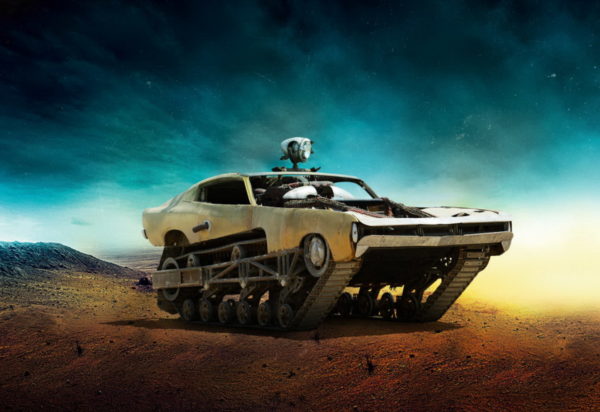 A 1970s Chrysler Valiant Charger, closely related to Ford’s XB Falcon is classic Australian muscle, and gets prominently featured in the Mad Max mythology as a mere Valiant skin, barely draping a U.S.-made Ripsaw light-tank chassis. Called the Peacemaker, it doesn’t look one bit like the name suggests, nor does it act like one in the film. 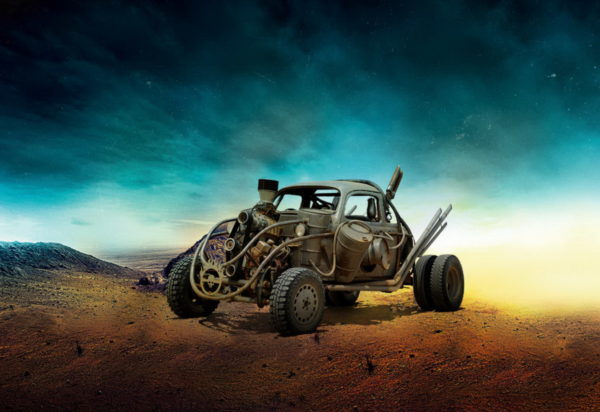 A perverted interpretation of the classic Volkswagen Beetle, the FDK is essentially a truck chassis with a lump of a V8 bolted ahead, and the midships of a Beetle track welded on it. In the story it acts as part of a convoy guard that throws off flames with fuel from barrels integrated into its structure. 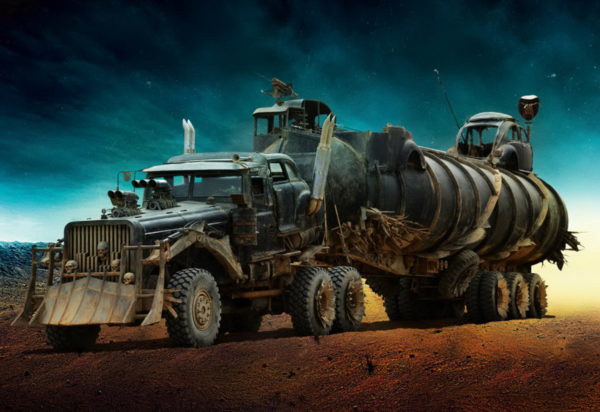 The War Rig is vehicular mutation at its best. A six-wheel-drive Tatra semi powered by two supercharged V-8s, with bits and pieces of car bodies stuck to it, masquerading as guard posts, the War Rig is a tanker that shuttles precious fluids from a warlord’s bastion to an imperatrix’s and back again. That, apart from all the skulls serving as decoration up front, along with the vicious plough. 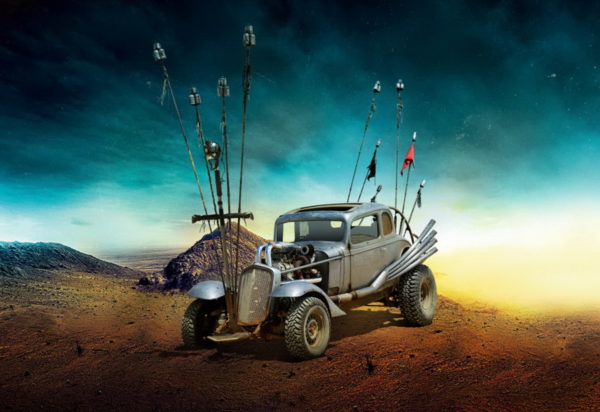 The Nux car is ’34 Chevrolet sitting atop a  fabricated chassis which includes a custom fitted independent front suspension. However, since the exhaust system of the nitrous oxide boosted, turbocharged V8 is routed across the doors, the driver has to get in through the roof. We’re not quite sure about all the staff mounted memorabilia it brandishes though. 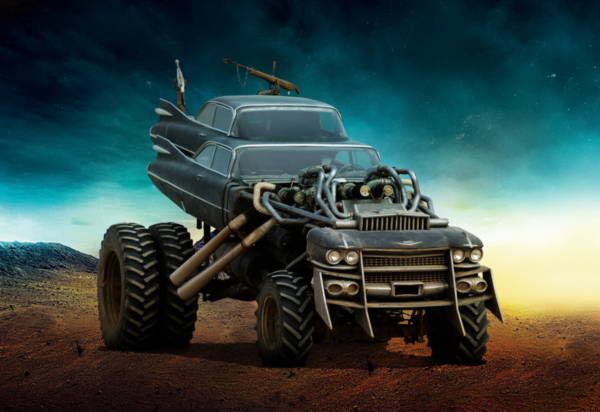 The Gigahorse is undeniably one of the most extreme vehicles to be featured in Fury Road. And it’s not hard to see why – the contraption embraces two 1959 Cadillac Coupe DeVille bodies, visually fused and literally welded into each other, straddling a huge truck chassis and powered by two turbocharged V-8 engines mounted alongside each other. The Gigahorse also rides on gigantic, twin tractor tires at the back, while the front is hunkered down by relatively punier rubber. 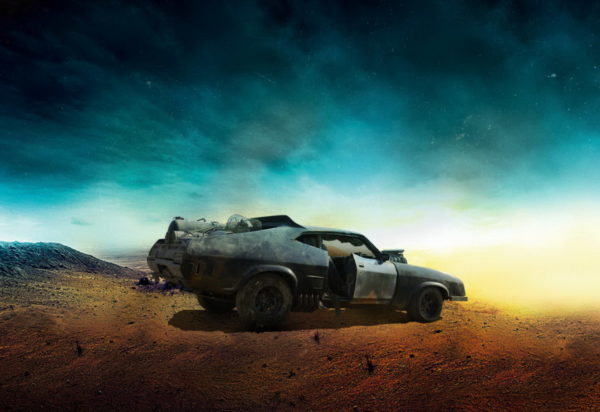 A Mad Max movie won’t be complete without the inclusion of the Interceptor, a modified 1973 Ford Falcon XB GT, often referred to as the Pursuit Special, or the V8 Interceptor. Used throughout the Mad Max franchise as the car driven by the officers of the fictional MFP (Main Force Patrol), the Interceptor is back for Fury Road , but it’s been treated to emanate an appropriately beat up and sandblasted demeanour. “A legend spotted in the gutter,” explains designer Colin Gibson, “rusted through and rattling with too many repairs and far too few original parts.”