Home Must Read Earthquakes : A comprehensive guide to mitigate loss of life and limb

PS: Please share with your friends and families to create awareness, and help save precious lives.

You might be wondering, “What is this kind of a public service announcement about earthquakes doing here on a motoring website?” Well, the latest natural disaster to befall our neighboring country of Nepal has left us all shaken, and perhaps a little worried of what precautions we should keep in mind next time our earth’s tectonic crust decides to move around. 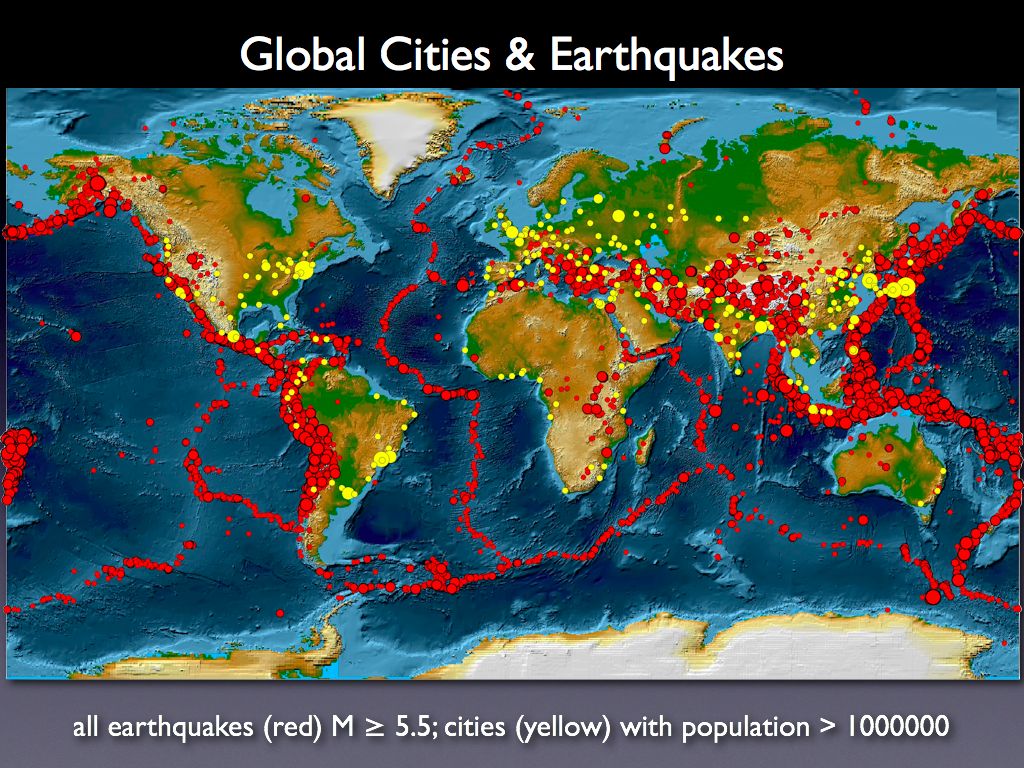 The following tips and guidelines have been making the rounds of social media for the last few days. Penned by a Doug Copp, Rescue Chief and Disaster Manager of the American Rescue Team International (ARTI), apparently the world’s most experienced rescue team, its ideas are a bit radical, and differ from the norm. Contrary to most common safety precautions we have been taught to take in the event of an earthquake, Doug’s article, called the “Triangle of Life” advocates a whole new set of practices and safety measures.

Since most stories that go viral on social media invariably turn out to be hoaxes and terribly misinformed knowledge, we were a bit apprehensive and had to check it out for ourselves.

We first went to our favourite myth-busting website, snopes.com. Then we checked out urban legends, and some more deep digging on our own. Although there exist some criticism and detractors to the teachings here, most of it seems to be truly life-saving. 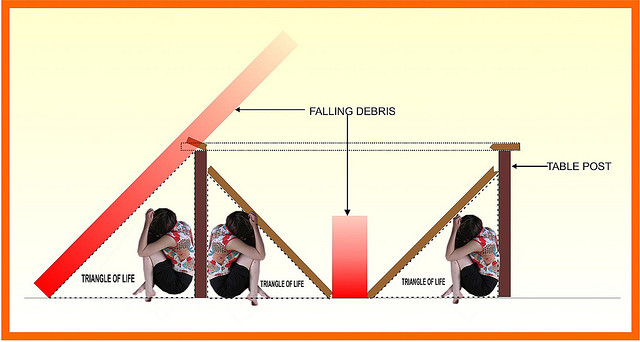 Here’s what Cop has to say about himself in the preface to his article:

“I have crawled inside 875 collapsed buildings, worked with rescue teams from 60 countries, founded rescue teams in several countries, and I am a member of many rescue teams from many countries. I was the United Nations expert in Disaster Mitigation for two years, and have worked at every major disaster in the world since 1985, except for simultaneous disasters.

The first building I ever crawled inside of was a school in Mexico City during the 1985 earthquake. Every child was under its desk. Every child was crushed to the thickness of their bones. They could have survived by lying down next to their desks in the aisles. It was obscene — unnecessary.

Simply stated, when buildings collapse, the weight of the ceilings falling upon the objects or furniture inside crushes these objects, leaving a space or void next to them – NOT under them. This space is what I call the ‘triangle of life’. The larger the object, the stronger, the less it will compact. The less the object compacts, the larger the void, and the greater the probability that the person who is using this void for safety will not be injured. The next time you watch collapsed buildings, on television, count the ‘triangles’ you see formed. They are everywhere. It is the most common shape, you will see, in a collapsed building. 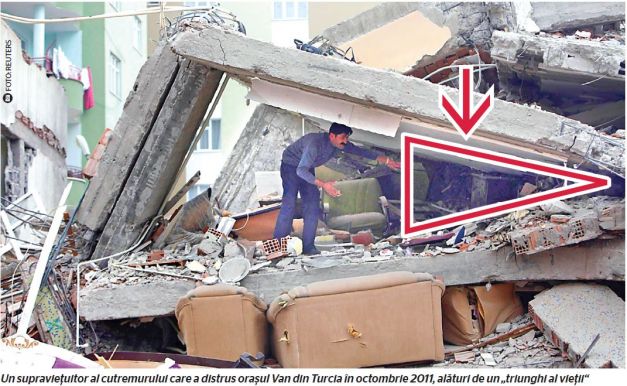 In 1996 we made a film, which proved my survival methodology to be correct. The Turkish Federal Government, City of Istanbul, University of Istanbul Case Productions and ARTI cooperated to film this practical, scientific test. We collapsed a school and a home with 20 mannequins inside. Ten mannequins did ‘duck and cover,’ and ten mannequins I used in my ‘triangle of life’ survival method. After the simulated earthquake collapse we crawled through the rubble and entered the building to film and document the results. The film, in which I practiced my survival techniques under directly observable, scientific conditions, relevant to building collapse, showed there would have been zero percent survival for those doing duck and cover.”

The most common criticism of Coop’s theories is that buildings are built differently in different countries thanks to different building codes and government regulations. What works for one are might not necessarily work for another. Moreover, his experiences were mainly based not on an actual disaster, but on a rescue exercise after an earthquake simulation.

That said, the Triangle of Life is a good primer on what to do in the event of an earthquake, and in the absence of other guides written in such concise and easy-to-understand manner, it is still one of the best. 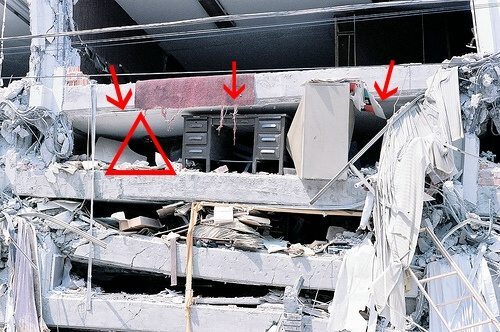 Here are some excerpts from his article. Keep them in mind the next time you are in an earthquake zone, and they just might be the difference between life and death.

1) Mostly everyone who simply ‘ducks and covers’ when building collapse are crushed to death. People who get under objects, like desks or cars, are crushed.

2) Cats, dogs and babies often naturally curl up in the fetal position. You should too in an earthquake. It is a natural safety/survival instinct. You can survive in a smaller void. Get next to an object, next to a sofa, next to a bed, next to a large bulky object that will compress slightly but leave a void next to it. 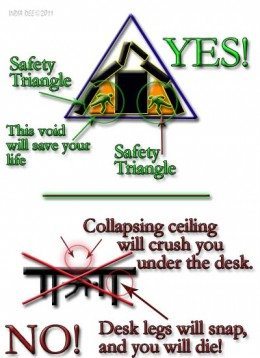 4) If you are in bed during the night and an earthquake occurs, simply roll off the bed. A safe void will exist around the bed. Hotels can achieve a much greater survival rate in earthquakes, simply by posting a sign on the back of the door of every room telling occupants to lie down on the floor, next to the bottom of the bed during an earthquake.

5) If an earthquake happens and you cannot easily escape by getting out the door or window, then lie down and curl up in the fetal position next to a sofa, or large chair. 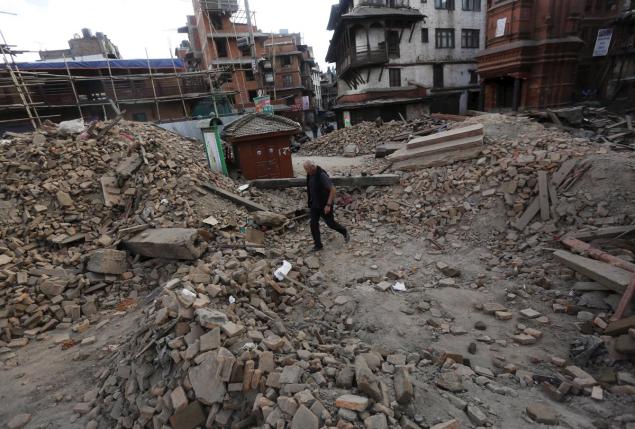 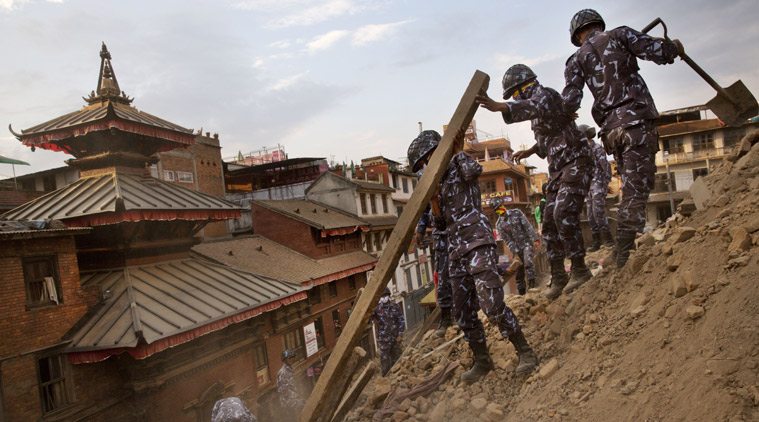 10) I discovered, while crawling inside of collapsed newspaper offices and other offices with a lot of paper, that paper does not compact. Large voids are found surrounding stacks of paper. 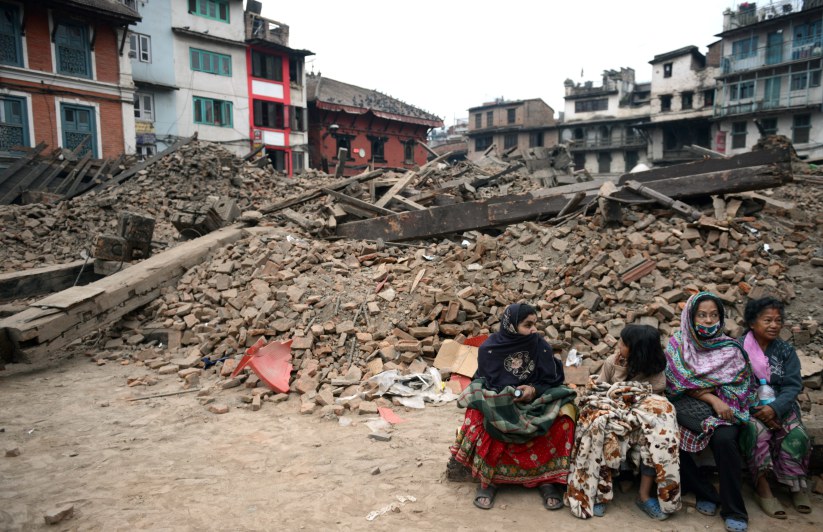 11) If you are inside a vehicle, come out and sit or lie down next to it. If something falls on the vehicle, it will leave an empty void

So there you have it, a handy reckoner of safety precautions in the event of an earthquake. Let us know what you think of this feature, and whether you would like to see such features in Motoroids more often.

As mentioned before, please share this useful piece of information with everyone you know, so it has a higher chance of reaching the people who need it the most – our brothers and sisters in Nepal, who have the threat of another earthquake looming large.