Maruti Suzuki’s next launch for the Indian market, the XL6 is coming closer to its launch date. This Ertiga based MPV will feature a number of premium touches, making it worthy to be sold through Maruti’s Nexa chain of premium retailers. Ahead of its launch on the 21st of August, we can confirm that the car will be offered in two trim levels, with both manual and automatic gearboxes and a total of six colours. The XL6 will come in the Zeta and Alpha trim levels, but the company is yet to reveal the feature list of these two variants. The colours on offer are with this new car are – Metallic Premium Silver, Metallic Magma Grey, Prime Auburn Red, Pearl Brave Khaki, Pearl Arctic White and Nexa Blue. All these details are available on the Nexa website, where one can book this upcoming MPV right now.

Based on the Ertiga, the XL6 is longer, wider and taller than the Ertiga by 50 mm, 40 mm and 10 mm respectively. However, the wheelbase, at 2,740 mm and the turning radius, at 5.2 metres, remain unchanged. Other changes exclusive to the XL6 include a new grille with twin chrome slats, faux skid plate, some black plastic cladding at the lower end and fog light assembly, roof rails and alloy wheels painted in a rather dark shade. 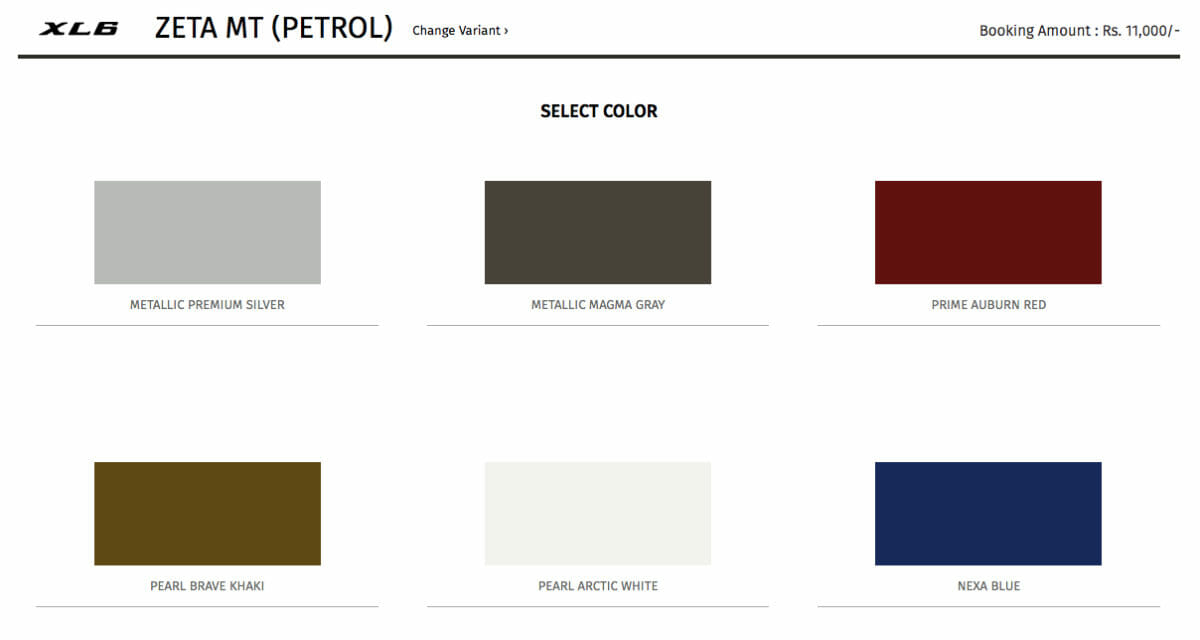 Coming towards the interior, the layout is quite similar to the one we have seen in the Ertiga, however, it will feature an all-black theme in the XL6. However, unlike the Ertiga, the XL6 will come with a 6-seat layout, with two captain chairs in the middle row with a separate recline function. The wooden trim on the dashboard will be in a darker shade than those in the Ertiga, and silver inserts will be present as well. The 7-inch touchscreen infotainment system will also be seen here, which would come with Android Auto and Apple CarPlay connectivity. Also on offer is an automatic climate control system, which would keep the cabin cool in hot Indian summers.

Powering the XL6 would be the same, 1.5-litre naturally aspirated petrol engine from the Ertiga. Combined with Suzuki’s hybrid technology, this engine would be capable of generating about 105 hp of maximum power and 138 Nm of torque. While a 5-speed manual gearbox will be offered as standard, the car will also come with the option of having a 4-speed torque converter. This engine is highly likely to be BS-VI compliant straight from the launch of the car.