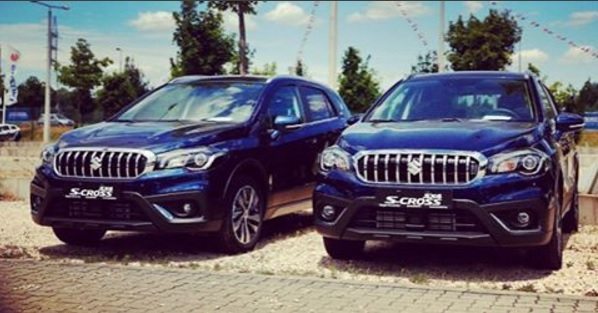 After being previewed in Hungary earlier this week, the new Suzuki S-Cross facelift has started reaching dealerships there, even though Suzuki’s Hungarian website shows no signs of updating. The face-lifted S-Cross gets a new, upright chrome grille with vertical slats, new headlamps with daytime running lamps and a redesigned front bumper. The sides and rear continue unchanged, while a new set of diamond cut alloy wheels fill up the old arches. The interiors remain more or less the same, apart from a new infotainment system with a bigger touch screen, while trendier seat upholstery with contrast stitching, along with a choice of inlays for the dashboard are also in place for the updated model.

In European markets, the S-Cross facelift will be powered by Suzuki’s 1.4-litre Boosterjet turbo-petrol engine. Employing direct injection, this engine produces 140 PS @ 5500 rpm, while 220 Nm of peak torque is available between 1700 to 4000 rpm. Power is channelled to all four wheels using Suzuki’s AllGrip all-wheel-drive system. Neither will we get this new engine in India, nor will we get the all-wheel-drive system. Instead, the existing 1.3- and 1.6-liter DDiS diesel engines will soldier on under the new S-Cross’s bulging hood when the car arrives in India sometime in 2017. You can also look forward to an all-new 1.5-litre petrol engine.