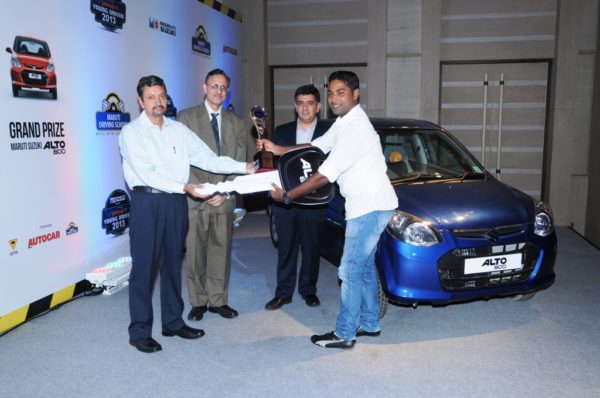 The hunt for the nation’s safest driver has finally reached the end of its journey, last evening Maruti Suzuki along with Autocar announced Mr. Smruti Ranjan Das as the winner of the fifth edition of Young Driver contest 2013 at Pullman Hotel.

This three month long contest held across 44 cities aimed at promoting the culture of safe driving especially amongst the Indian youth, wherein the competition tested the participant’s knowledge of traffic rules, awareness of road safety and their real world driving skills. The contest was open to all individuals, between the age of 18 and 30, with a valid Indian driving license.

With a staggering figure of close to 50,000 registrations at the start of the contest, they had finally narrowed down to the last 28 finalists. The last round of the Young Drivers 2013 contest was held yesterday at the Institute of Driving and Traffic Research (IDTR) in New Delhi, where the 28 finalists showcased their driving skills on the test track of the institute for the last time.

Mr. Smruti Ranjan Das excited about his triumph said, ‘Loosing and winning doesn’t matter it’s about learning and he learnt a lot through the contest”

Elaborating further on the concept of the event Mr Mayank Pareek, COO (Marketing & Sales), Maruti Suzuki India says, “Maruti has always believed in promoting responsible driving. Young driver provides a platform to every young individual to showcase his or her skills of being a safe driver. We are dedicated to promoting the culture of safe driving through communication programmes, IDTRs (Institute of Driving Training & Research) and Maruti Driving School MDSs. In fact this programme tested the skills of the contestants in the facilities provided by the Maruti Driving schools across the country. Tests were conducted in MDSs across 44 cities. The participants also embarked on simulator tests there. In fact the Maruti Driving schools are the state of the art driving schools in the country. Maruti Driving Schools were the first to introduce advanced driving training simulator for better judgment and concept of route maps for holistic on-road practice. They have a widespread presence of around 280 schools in over 150 cities across India.”

Speaking on this edition of the contest, Hormazd Sorabjee, Editor, Autocar India says, “Autocar India has always strived hard to promote road safety and safer driving habits and this year the contest involved more engaging activations such as Safety Saturdays, campus visits and mall promotions to ensure that we targeted the youth all over the country and motivated them to participate in this contest.”