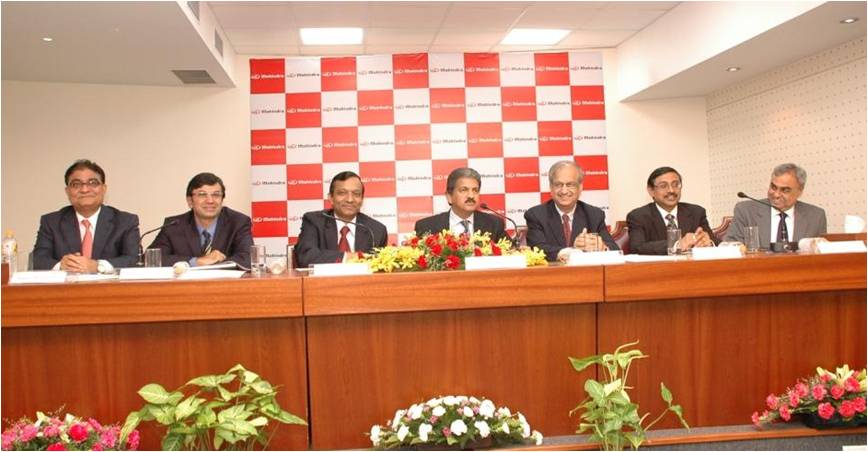 Mahindra & Mahindra has been announced as the preferred bidder for the buyout of the Korean carmaker Ssangyong Motor Co.! The deal itself and the reports surrounding this deal have been making news every now and then. Two days back Mahindra & Mahindra and another Indian business house, the Ruia Group submitted their offers for the buyout of the Korean firm, the details or the precise numbers however were not disclosed.

While the numbers still remain a secret, Ssangyong prefers Mahindra & Mahindra for the bid. The acquisition of the Korean car manufacturer will give Mahindra a major boost for its global operations. It will not only give M&M access to Ssangyong’s network in South Korea and Russia, but will also give the Indian carmaker a wealth of knowledge and know-how for their SUV and small-car operations, thanks to Ssangyong’s R&D exercises. Stay tuned to Motoroids as we bring you more info on this deal as and when the details are available to us.

Mumbai, August 12th, 2010: Mahindra & Mahindra Ltd. (M&M), India’s leading manufacturer of utility vehicles, emerged as the preferred bidder for the acquisition of a majority stake in South Korean SUV maker, Ssangyong Motor Company (SYMC).  The preferred bidder status would require it to enter into a Memorandum of Understanding with SYMC, followed by a detailed due diligence process.

SYMC is a Korean manufacturer of auto and aggregates, with 7 models under 5 brands. The 7 models include 2 large sized sedans, 4 SUVs and 1 MPV. It also has a manufacturing plant for gasoline and diesel engines as well as axles. SYMC is a significant player in the SUV segment in Korea, having recorded 1.3 million SUV sales from 1990 to 2009. It has a strong brand and presence in Europe, Russia, South America, the Middle East, Africa and Asia. Established in 1962, SYMC has more than 1,200 dealers globally. It has R&D manpower strength of around 600 people and modern R&D infrastructure for design, testing and validation.

This strategic acquisition, when concluded, would make Mahindra and SYMC together a force to reckon with in the global SUV space. It is intended that SYMC will continue to function as an independent entity with Korean management.

“Korea is one of the world’s leading centres of automotive excellence and Ssangyong brings with it a rich legacy of R&D and innovation. Mahindra and Ssangyong will create synergy, which will make us significant global players,” said Mr. Anand Mahindra, Vice Chairman and Managing Director, Mahindra Group.

“Ssanyong has very strong competencies and capabilities in technology. We are committed to leverage this competency by investing in a new Ssangyong product portfolio to gain momentum in global markets,” said Dr. Pawan Goenka, President, Automotive and Farm Sector, Mahindra & Mahindra Ltd.

There are strong complementarities between the SYMC and Mahindra portfolio of products, providing an opportunity to create distinct positioning. The wide sales and distribution networks and complementary product lines will provide access to many overseas markets for both companies. There is also an opportunity to introduce a premium portfolio of SUVs in the Indian market, providing a new growth avenue for Ssangyong and further strengthening Mahindra’s dominant position.

About The Mahindra Group

Mahindra embarked on its journey in 1945 by assembling the Willys Jeep in India and is now a US $7.1 billion Indian multinational. It employs over 1,00,000 people across the globe and enjoys a leadership position in utility vehicles, tractors and information technology, with a significant and growing presence in financial services, tourism, infrastructure development, trade and logistics. The Mahindra Group today is an embodiment of global excellence and enjoys a strong corporate brand image.

Mahindra is the only Indian company among the top tractor brands in the world. It is today a full-range player with a presence in almost every segment of the automobile industry, from two-wheelers to CVs, UVs, SUVs and sedan. Mahindra recently acquired a majority stake in REVA Electric Car Co Ltd. (now called Mahindra REVA), strengthening its position in the Electric Vehicles domain. The Mahindra Group expanded its IT portfolio when Tech Mahindra acquired the leading global business and information technology services company, Satyam Computer Services. The company is now known as Mahindra Satyam.