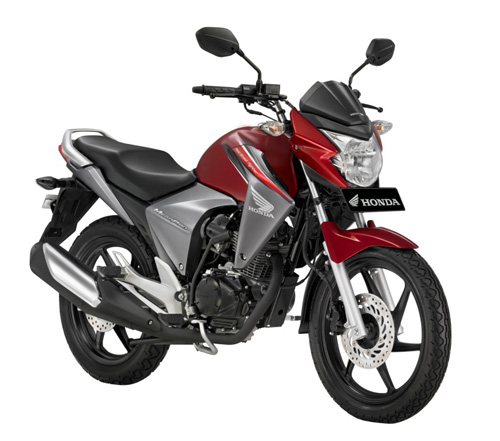 The Honda CB Unicorn Dazzler has been a very big move from the HMSI (Honda Motor & Scooter India) stable in India which has given the Unicorn a very much required refreshed look. The bike also comes with a few goodies like front and rear disc brakes. The bike, called as CB Unicorn Dazzler in India has been launched in Indonesia by the name New MegaPro. This move has been made with an intension to gain market share over its rival Yamaha in Indonesia.

The MegaPro already existed in Indonesia, but the firm claims that the New MegaPro is more aerodynamic, muscular and efficient. One of the features that the New MegaPro gets as an upgrade from its predecessor is the analog tacho and digital speedo combo. The 150cc mill that powers this bike features Honda’s “X-tra Responsive Performance” with lower friction and 20% more efficiency. Along with these, the bike also features CECS (Crankcase Emission Control System), SASS (Secondary Air Supply System) Throttle Position Sensor + CDI with 12 Ignition Mapping.

“We hope that the New MegaPro, which is equipped with a new design and engine can be accepted by sports-motorcycle lovers in Indonesia,” said PT Astra Honda Motor (AHM) president director Yusuke Mori. The firm has set a goal to achieve the sales figure of about 15,000 units per month.