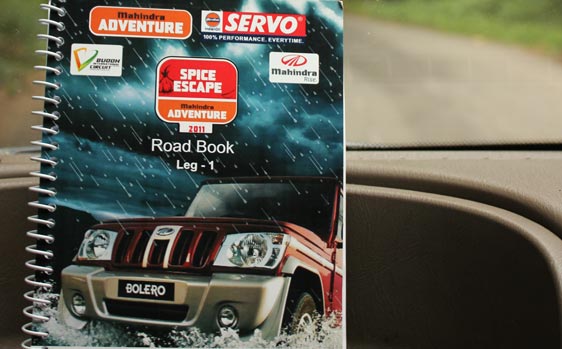 The Spice Escape event organized by Mahindra & Mahindra under its Mahindra Adventure arm, took place on the 16th and 17th of September, 2011. The event was exclusively conducted for Mahindra vehicle owners and had been approved by the Federation of Motor Sports Clubs of India (FMSCI). The event was a TSD (time, speed, distance) rally which is not about mere power and speed but about being at the right place at the right time for which you need to be travelling at the right speed.

“In keeping with our promise of providing adrenaline pumping challenges under Mahindra Adventure, we are pleased to launch the Spice Escape 2011 in association with Servo. So here’s your chance to start your engine and ‘get ready to get lost’ in ‘God’s own country’,” said Mr Vivek Nayer, Sr. Vice President, Marketing, Automotive Division, Mahindra & Mahindra Ltd.

On the morning of the 16th the Excise Minister of Kerala Mr KR Babu, flagged of the first ever Spice Escape, from Holiday Inn, Kochi, Kerala. The event witnessed more than 30 Mahindra cars along with their owners who competed for the prize money of Rs 5 lakh as they drove from Kochi to Munnar via Athirapilly waterfalls on Day 1 and back from Munnar to Kochi via Idduki Dam on Day 2.

“The Spice Escape 2011 is a perfect platform for SERVO lubricants from IndianOil to connect with the growing number of SUV owners in India. This TSD format brings alive the sense of adventure, the desire to seek new experiences and the interest in connecting with demanding customers that both Mahindra and SERVO share in common. Mahindra & Mahindra is one of our key business partners for our lubricants for their full range of vehicles,” said Mr N. Srikumar, Executive Director (Corporate Communications & Branding) IndianOil.

It all started in the morning of Day 1 when the 31 teams were ready at 6:45 am with the tulip chart (road book) for the day, after a brief study of which, the first car was flagged of by 7:30 am. Comprising of two sections, the Leg 1 covered a total of 210 km. The participants were blinded of any details regarding the time control checkpoints (TC). 3 TCs placed within half a kilometre of each other, in section one. On the other hand, section 2 of Leg 1 had 2 competing stages of 13 kilometres and 15 kilometres each, with a Free Driving Zone of over 117 kilometres. In the course of the rally, participants came across varying road conditions, 3 lane highways, populated town roads, foggy mountains and narrow one-way village roads with the risk of rash bus drivers.

The event ended with Sachin Singh grabbing the first position followed by Ramesh and Karthik in the second and third position respectively.