While Tesla has successfully established itself as the prominent EV automaker, Lucid is still best known for supplying batteries to Formula E race cars. Now, with a new portfolio of cars, the  company looks to challenge luxury electric vehicles such as the Model S and Porsche Taycan with its all-new 2021 Air sedan. 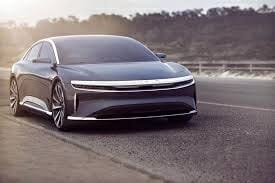 The car was originally scheduled to be unveiled at the New York auto show but due to the pandemic, it’s scheduled to be showcased online. “Although we are experiencing an unprecedented time in our history, the determination of this company’s employees in developing a game-changing electric vehicle burns ever more brightly,’ said Peter Rawlinson, CEO and CTO, Lucid Motors. “Our mission is to deliver sustainable luxury with a class-leading range in the form of the Lucid Air, and we are closer than ever to turning that dream into reality,” he added.

What’s interesting about the car?

The burning problem in the entire EV industry is the range and practicality. Well, seems like Lucid Motors have found the answer to it. Lucid claims that the Air will have a range of around 832 kms which shall then become the benchmark for the electric car industry, and a headache for the Tesla Model S.

Lucid Motors even knew the immediate question coming into our mind after hearing such a long range, the charging time. The car  claims that it has the fastest charging technology which would indeed, set another benchmark. It claims to charge at up to 20 miles per minute, translating into the car getting up to 483 kms of power in just 20 minutes of charging. 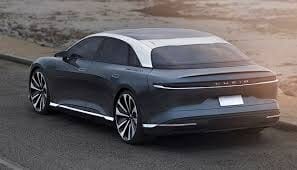 “We designed every aspect of the Lucid Air and its platform in-house to be hyper-efficient, from the power-train to the aerodynamics, and we’ve set several new benchmarks through these efforts including the longest range EV with an estimated EPA range of 517 miles (832.03 km),’ said Eric Bach, vice president of hardware engineering, Lucid Motors. “With our ultra-high voltage 900V+ electrical architecture and the proprietary wunderbox, we have significantly increased the speed of energy getting into, around, and even out of the vehicle, delivering the world’s fastest charging EV packed with future-ready charging features,” he added.

The Air is expected to come equipped with single and dual electric motors, as a rear-wheel drive and all-wheel drive with a claimed 1000 horsepower. Still, the different variants shall soon be unveiled by Lucid Motors. The company also claims the Air will be able to accelerate from zero to 60 mph (0 – 100 kmph) in less than 2.5 seconds and have a top speed of more than 200 mph (322 kmph). This sedan will be supported by an air suspension, which the company says helps provide a smooth ride. Its low center of gravity is also expected to help its handling characteristics around the corners.

Although the Air shall compete with Tesla and Porsche, in the electric luxury sedan segment, we won’t be seeing either in India due to lack of proper infrastructure for EVs and very high import duties restricting such super-cars from entering India.