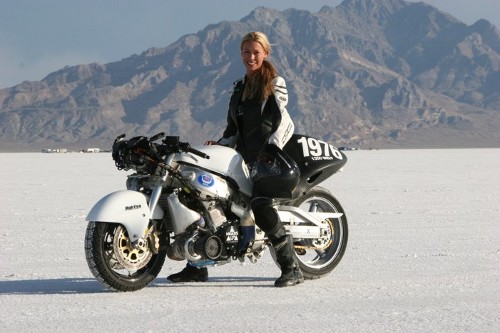 Leslie Porterfield, who has recently secured a place in the Guinness Book of World Records for being the world’s fastest woman on a motorcycle at over 232 mph, has been signed an exclusive sponsorship agreement to represent Bazzaz, inc at the Speed Week August 14th- 20th, 2010 and the BUB Motorcycle Speed Trials at the Bonneville Salt Flats August 28th- September 2nd, 2010. Porterfield will be competing on a turbocharged Sir Speedy Honda CBR 1000RR built by Al Lamb’s Dallas Honda.
Porterfield is thrilled to partnet with Bazzaz, “They are definitely the leader when it comes to engine management and electronics for professional motorcycle racing. It’s all about performance and I can confidently say that they have the market cornered in that arena.”
Joe Buxton, General Manager of Bazzaz was excited to partner Lamb and Porterfield, “These guys are great mechanics. They understand the importance of a properly tuned engine and what it takes to build a great race bike that will win races.” Buxton is also looking forward to increased product development and the feedback they will receive from Porterfield’s team. Buxton and the Bazzaz team will be on hand to support Porterfield as she hits the salt on August 16th, in the turbo-charged Sir Speedy Honda CBR 1000RR.
This year Porterfield will be representing not only Bazaaz, but also American Honda Motor, Honda Pro Oils & Chemicals, Shoei, Ohlins, PMP, TCX, Dunlop, Apex, Worldwide Bearings, Pompis, Fieldsheer and Foremost Insurance at Bonneville.
News
,
Comments
Leave a Reply Cancel reply