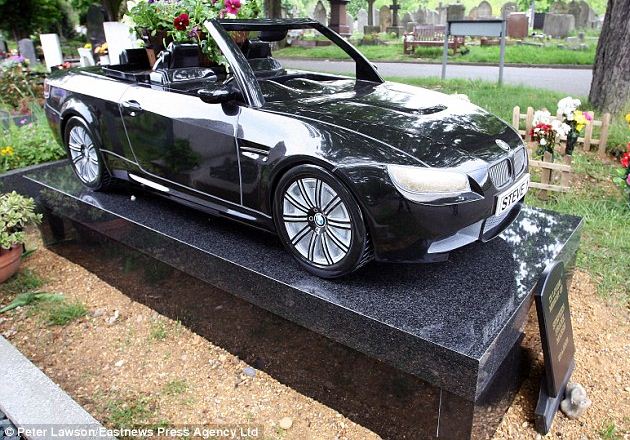 Are you a true fan of a particular car brand? Yes you may be! But not more than Steve Marsh who was a hardcore BMW fan. He was so much in love with BMW that he could not resist leaving the world without one. That’s true, as after his death he lies with a BMW M3 convertible replica above his grave. Steve was 51 when he died.

Strangely, Marsh was an engineer at Ford even though he had this high magnitude liking for BMW. The BMW M3 convertible was in the top of the list of his favorite BMWs. His wife and children believed that it would not be a problem to get a headstone designed in the exact shape of his favorite car. The replica is an exact copy of the car both in looks as well as dimensions and is carved out of a single block of granite.

The M3 convertible replica costs more than $75,000 and was shipped from China. The replica weighs a ton and took the aid of a crane and 20 operators to put it in place at the Manor Park Cemetery in East London. “You have to admit it’s totally different to everything else around it. It’s definitely not my taste. I think some people will say it’s tacky and it could end up as a target to be vandalized. It could open the floodgates for anything to be built in a cemetery. When I walked past it the other day, though, I have to admit it did make me smile,” said a local resident Rene Dryden.