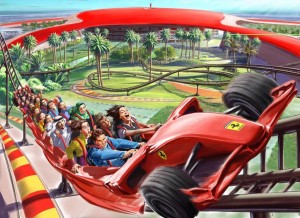 A few months ago, we had brought to you the news about the world’s first Ferrari Theme Park which was under the progress of its development at Abu Dhabi. This theme park is all set to be inaugurated on the 28th of October, 2010 which is three weeks ahead of the city’s Formula 1 Grand Prix. 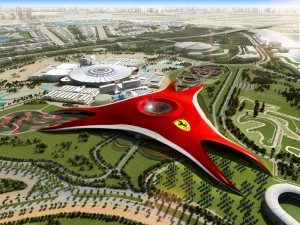 The shape of the entire building is inspired by shape of a Ferrari car and it also bears the largest prancing horse Ferrari logo ever built. The theme park is situated next to the Yas Marina Circuit and covers a total area of about 200 square kilometers. Along with a wide range of indoor games and rides, the theme park will also boast of the world’s fastest roller coaster called Formula Rosso.

The Formula Rosso is designed to replicate the thrill of driving a F1 car with an acceleration of standstill to 100 kmph in just 2 seconds. The rollercoaster will boast of a top speed of 240 kmph and will be 2.07km long pulling up to 1.7G. Passengers of the roller coaster will have to mandatorily wear protective gear including eyewear to shield the eyes from the heavy winds created at the high speeds propelled by the 20,800bhp propulsion system.