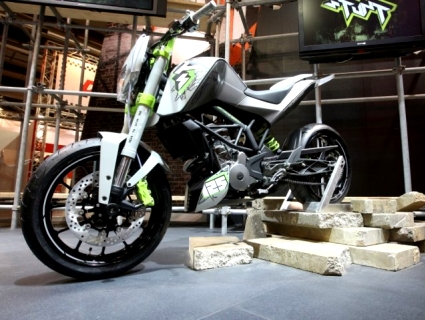 Well kid, Avatar isn’t only about blue human-esque aliens; it is also about orange bikes now. We had told you sometime back that KTM was running a contest on their Facebook page which wanted people to suggest an apt name for its 125cc ‘stunt’ and ‘race’ concepts. Well, they have found a winner!

As the title suggests, the final chosen name for the concepts is ‘Avatar’ which was suggested by a bloke called Alexey Golkin. Golkin suggests that the name ‘Avatar’ is befitting for the new entry level performance bikes. But mind you, KTM is expected to given the ‘Avatar’ christening to the concepts only – the actual production versions of the 125cc stunt and race bikes could be called something else when they roll out in March 2011.

As promised, Alexey Golkin will be presented with the 125cc motorcycle with personalised graphics when the production model(s) rolls out. Head over to the next page to watch the VIDEO of the KTM 125cc STUNT & RACE CONCEPTS>>>