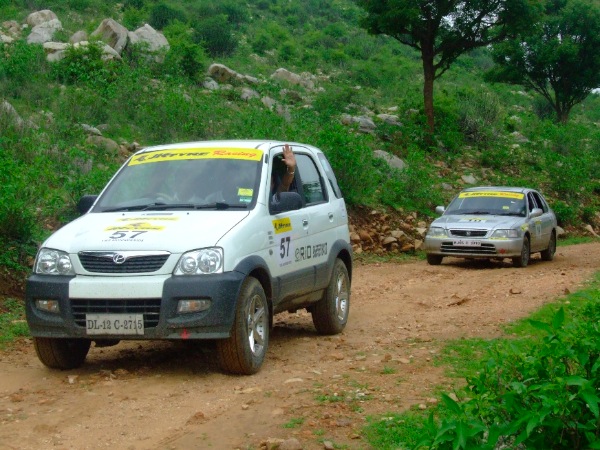 ‘The Monsoon Ride’ 2010 organized by Western Motorsports and supported by JK Tyre and Industries Ltd. culminated successfully last Sunday in Jaipur. The winners of the rally were felicitated at the Angara discotheque. The rally was ceremonially flagged-off on 31st July by His Highness Maharaja Sawai Bhawani Singhji, MVC, from the Pink City Restaurant, Jal Mahal, Jaipur.

This year more than 100 participants competed under four categories viz. Four- wheelers overall, Four-wheelers open category, Four-wheelers All Women Team, Two-wheeler overall, Two-wheeler Bike category and Two-wheeler Scooter category. The participants included local students, professionals, businessmen and housewives across all age groups. The participants and the organizers were excited throughout the event and the audience were enthralled, cheering up their favorite participants as they zipped past traversing through the rough terrains. The Monsoon Ride is gaining popularity across the state of Rajasthan, exemplified by the increase in the number of entries and the enthusiasm levels of the people this year round.

The Leg-1 of the TSD (Time, Distance, Speed) rally began on Sunday morning, the 1st of August, 2010 at 0500 hours and the rally moved towards Alwar passing through Sariska. After the lunch halt at the Alwar Bagh resort, the Leg-2 of the rally took the vehicles through Raisar and finally finished at Jaipur in the evening. The day was marked with 15 hours of non-stop action as the vehicles traversed through 300 kms of charming yet challenging Aravalli ranges.

The title sponsor JK Tyre and Industries Ltd. has been contributing towards the development of all forms of motorsport like rallying, racing & Karting, in India since the last two decades. JK Tyre is credited with introducing the concept of Karting in India and has patronized Karting circuits in several cities of the country, which have become the breeding grounds for the country’s motorsport talents. The Monsoon Ride was also supported by an electronics engineering company – Instrument Research Associated (IRA), Innovative Web Technologies Pvt Ltd, The Pinkcity Restaurent, Alwar Bagh Resort and Angara Discotheque.