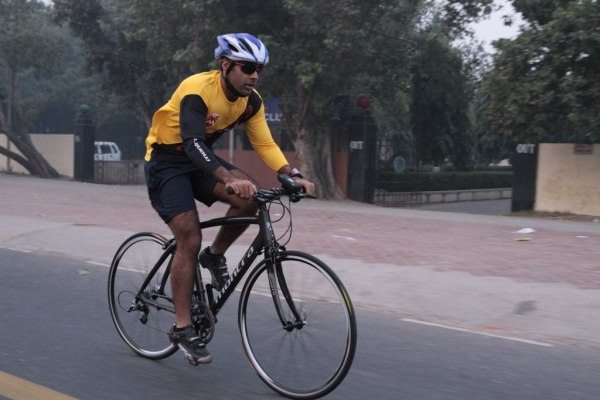 Indian racing ace Karun Chandhok today launched a charity cycling event titled “KC500 presented by Montra” in partnership with the Madras Midtown Round Table 42. The ride will cover a distance of 500 kilometres starting from Karun’s home town of Chennai and finishing 7000 feet above sea level, in the hill station of Kodaikanal.

The ride will start on Karun’s birthday, the 19th of January with a mass start where any member of the public will be welcome to join the main ride. Rider registration for the mass start will open on the 1st of January. With stopovers in Pondicherry, Tanjore, Madurai and finishing in Kodaikanal, it breaks up the ride into approximately –

The aim of the event is to raise funds for the Vishnu Devananda Charitable Trust run by Karun’s family to educate children and rebuild homes and fir Madras Midtown Roundtable – 42 foundation, a charitable trust to support school and educational projects.

With support from the TI Cycles “Montra” brand and the AVT Tea group as well as from Mahindra and Deepak Agencies on board so far to help cover the costs of the event, Karun and the MMRT42 foundation are looking to raise funds through sponsorship and individual online donations from around the world.

Q & A with Karun Chandhok

What was the idea behind the “KC500 presented by Montra” ?

I was looking for an idea of a fund raiser this year and thought why not do a cycling challenge where we ride for a cause and get people from around the world to donate and support our ride. I have a huge passion for Cycling and have been working for the last few years with TI cycles to promote the idea of cycling as a form of exercise and as a social activity in India, as it is in the rest of the world. Kodaikanal is one of my favourite places in the world and I’ve always wanted to ride up the hills, so the idea just clicked in my head. I pitched the idea to TI cycles and they immediately offered their support, so the “KC500 presented by Montra” was born.

Tell us about the Vishnu Devananda Charitable Trust ?

When I left India to race in Formula 3 back in 2002, my mother said something very important to me : “This F1 dream that you and your dad have is great, but you must make sure that it serves a higher purpose.” We created a trust geared mainly around education of underprivileged children but with a real attention to detail – my mother inspects the report cards to make sure the kids are studying properly, we pay for their tuition, school uniforms, bus passes and so on to make sure they have every opportunity. This means that we look after less kids, but try and ensure they get quality support. The first beneficiaries of our trust have just finished college, where we even bought them computers for their engineering degrees. We are immensely proud that they have got jobs earning decent salaries more than their parents already. We are also keen to ensure that they have a decent place to live, so sometimes even help rebuild the homes where their families live.

What about the involvement of Round Table India ?

I was talking to my friend Mahesh Ramamurthy about the KC500 and he got quite excited. Mahesh, who is the Chairman of Madras Midtown Roundtable 42, said they were looking for new fund raising ideas for their schools and so we decided to partner up. They have taken a huge load of organisation off my shoulders, as I’ve been travelling all over the world during my racing season. They are raising funds to rebuild a school and so we figured it would be best to join forces. The RTI42 team have been superb in terms of getting the operations of the event and website sorted.

How do people pledge their support ?

We have made it really easy for anyone, anywhere in the world to donate. All you need to do is go on to www.kc500.com and click on “Donate” on the home page. You can donate through a Paypal account or by using a debit or credit card. For people who prefer to donate the old fashioned way, we are also happy to accept cheques which can be sent to “MMRT 42 foundation” at T57/B, 32nd cross street, Besant Nagar, Chennai, 600 090.

Could you tell us about the event itself ?

It’s going to be hard work and good training for my racing season ! The ride will be over four days from the 19th to the 22nd of January. The route goes from Chennai to Kodaikanal and along the scenic roads, instead of the highways. I’ve enlisted the Tamil Nadu Cycling Club to organise the event and logistics as they are a great group of enthusiasts who do these events regularly. The riding time will be from 8am every morning with a stop for lunch and finishing no later than 5pm.

Mahindra have kindly offered to send us support SUV’s full of food, drinks, spare parts, mechanics, medical supplies and physios so the riders will be looked after. We have got AVT Tea to be a partner alongside our title partners “Montra” from TI cycles, to help cover the cost of the event so the funds for charity can be raised through individual donations.

For the mass start in Chennai, we have also got the CRX cycling group involved. We want to get as many people from in and around the city to get on a bike and join us to send the main group off on the 500km ride. CRX will be co-ordinating this and we hope to have a great turn out of a few hundred riders.

For the start in Chennai, we are going to leave it open and have as many people as possible come – so anyone who wants to ride along, please come and join us at the Pallikaranai Government school, Pallikaranai for the start and support us.

Registrations for the mass start will be open from the 1st of January and is open to anybody and everybody who wants to ride. Being a Sunday morning, we hope to have lots of school kids come and join us ! It would be great to have a few hundred people for the mass start.

For the full 4 day ride I would like to limit it to 30 riders, so it’s a safe and manageable group. Riders can register by e-mailing the Tamil Nadu Cycling Club team on – tcctot@gmail.com with “KC500” in the subject.