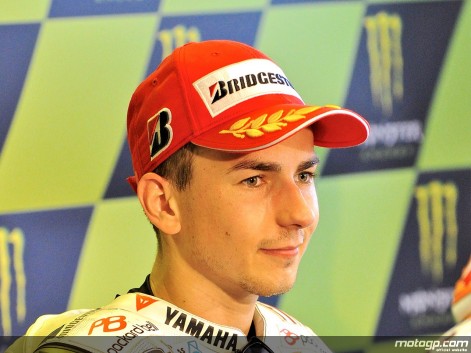 Despite securing a pole position the defending world champion Valentino Rossi could not stop Jorge Lorenzo from scoring his 2nd successive win at Le Mans International Circuit. In the early stages, it was Valentino taking full advantage of his pole starting position, as he claimed the lead into the first turn ahead of Repsol Honda’s Dani Pedrosa and Lorenzo. The number 99 rider was able to maneuver around. Rossi quickly took the lead in the early stages of the race, but was overcome by his teammate Lorenzo in the opening lap. Pedrosa for second-place and from there he set his sights on the Italian. A defining moment of the race came early during the second lap when Stoner crashed out in Turn 6. The Australian was not able to get back on his bike and took his second DNF of the season as a result. The Monster Yamaha Tech3 bike of Ben Spies also encountered misfortune when Spies took a spill shortly after Stoner. Suzuki’s Loris Capirossi was also forced to end the day after he damaged his bike during a fall.

A good fight broke out on Lap 7 when Lorenzo stole the lead from Rossi, but soon gave it back. Still determined, Lorenzo made an attempt again on Lap 10 and this time was able to make the pass stick and went about opening a small gap between himself and the defending champion.

Lorenzo and Rossi held the top two positions while a struggle for third developed between Repsol Honda teammates Pedrosa and Andre Dovizioso. The teammates were focused on each other and that allowed Ducati’s Nicky Hayden to move into striking distance behind them.

Meanwhile, Lorenzo was able to extend his lead to four-seconds ahead of Rossi with only four laps to go. Pedrosa and Dovizioso were consumed in a tense battle for the final podium spot while Marco Simoncelli, Colin Edwards and Hector Barbera fought amongst each other for eighth position.

Towards the end of the race, Dovizioso forced his way past Pedrosa for third-place and in the process, Hayden also managed to sneak into fourth, leaving Pedrosa languishing in fifth. Rounding out the top-10 was Hector Barbera, Aleix Espargaro and Marco Simoncelli. Monster Yamaha’s Colin Edwards finished 12th.