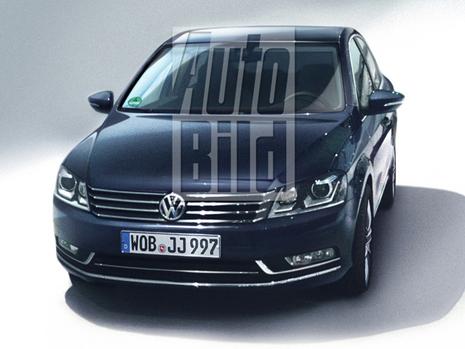 Germany’s highly regarded magazine Auto Bild has come up with the first leaked image of VW’s much awaited 2011 Passat. The new car (in case it really is what it’s said to be) is the most honest representative of the VW’s new design language.

The new design stresses on highlighting the width of the car and is reminiscent of the recently updated Phaeton limousine as well as the Touareg. The front and back of the new car have been accentuated with a heavy dose of chrome. The new Passat has a flat shoulder line and with the subtle, yet strong lines of its reasonably big size, it presents itself as a transportation tool of choice for well-to-do executives. The new Passat is expected to hit the international market by the end of this year and it should be first previewed at the Paris Motor Show.

The new Passat is expected to take the game higher for VW, and the company expects the new machine to be comparable to the 3-series, C-class and the A4 in terms of brand perception. While that may sound a little too optimistic to a lot of people, it’s not difficult to understand why VW are so positive. The new Passat will host an array of technologies which have yet been unheard of. Some of these wondrous technologies will include airless tyres and a wiper-less windscreen cleaning system. A magical electronic stability system is also expected which will automatically offer counter-steering assistance in adverse driving conditions.

Engines for the new car will include a 300bhp power plant with a displacement of 3.0L. The new engine will also be using direct injection for enhanced power and fuel efficiency. The rest of the engine lineup is expected to benefit from some form of forced induction as well. Other models will include a new hybrid as well as a high-performance diesel with AWD.