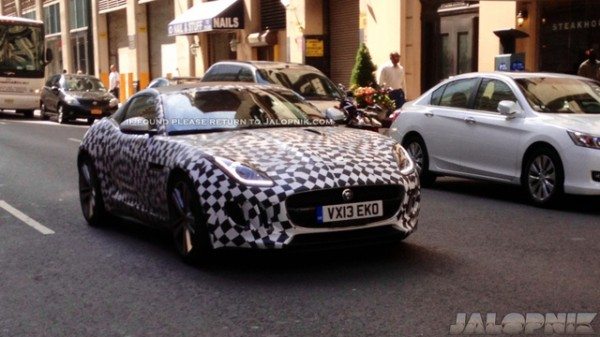 We reported in detail when it first emerged that Tata group owned British car marker Jaguar plans to soon come up with the coupe variant of the new F-Type. The new Jaguar F Type, in a topless avatar, was unveiled at Paris in September last year and was recently launched in India. The Jaguar F-Type can safely be credited with resurrecting the car maker’s heartland: a two-seater, convertible sports car focused on delivering gut wrenching performance, nimbleness and overall driving pleasure (remember the E-Type?).

What we have here today is the second set of Jaguar F Type coupe spy pics, that have been taken in Manhattan. From the looks of it, the F-Type coupe seems to be in the last stages of development.

The Jaguar F Type convertible has won many accolades from various publications and auto experts and the coupe should be no different. The new F-Type has also been declared as the 2013 World Car Design of the Year. Commenting on the latest achievement, Ian Callum, Director of Design at Jaguar, said: “No design project has given me greater pleasure than the creation of the F-TYPE. It’s a project I’ve looked forward to from the moment I joined Jaguar, and it’s one that’s given my team and I great satisfaction. The F-TYPE is a sports car that is true to Jaguar’s design values – beauty of line and purity of form – and I’m honoured that the World Car of the Year jury has recognised our work with this award.” 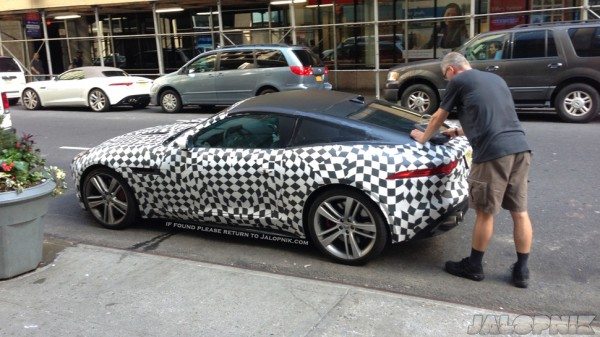 Powering the Jaguar F-Type convertible is a set of petrol engines that will be shared with the upcoming coupe body variant. The F Type’s V6 engine displaces 3.0 litres and is forced fed by a supercharger. The engine has a max power output of 380PS. The F-Type V6 S has an electronically limited top whack of 275 kmph. The V8 that powers the new F Type displaces 5.0 litres and gets a supercharger. The engine has a max power of 495PS. Both the engines come mated to an 8-speed automatic gearbox that transmits power to the rear wheels. Safely expect both the engine options to be carried over to the coupe.

It is being said that also on the anvil is a 2 litre turbocharged petrol engine that will be the entry level engine option. The 4 pot motor will have a max power of 240 Bhp. The F-Type coupe takes design inspiration from the Jaguar C-X16 concept.