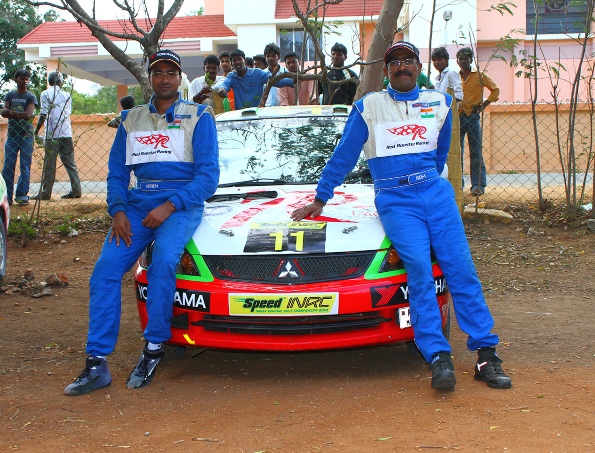 The second round of INRC Rally De Coimbatore was dominated by Naren Kumar (co-driver Ram Kumar) and Vikram Mathias (PVS Murthy), taking the top two spots. The third place went to Arjun Balu (Sujith Kumar) from MRF Racing in the 2000 cc N+ category.
Naren Kumar set the scorching pace in the very first stage. Last round (Nashik) winner – Gaurav Gill of Team MRF – drove well to catch up but could not match the timings of the Red Rooster driver. At the end of the third stage, team MRF’s champion driver was behind by 25 seconds, closely followed by Vikram Mathias (PVS Murthy) and Amittrajit Ghosh (Ashwin Naik), both of Team Red Rooster. The fourth stage saw the first casualty with Gaurav Gill (Musa Sherif) suffering a ball joint break which knocked him out of this race. 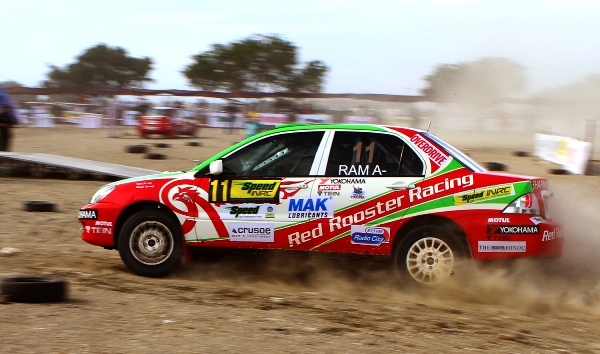 At the end of stage six, Naren kept his lead of 2 minutes+ over Mathais, however, last year’s winner of the INRC Rally De Coimbatore – Red Rooster’s Amittrajit Ghosh (Aswin Naik) who were in a strong third place suffered a technical failure in the transport stage putting them in a compromising situation for the remainder of the rally. What could have been a 1-2-3 sweep for team Red Rooster was now out of reach with team MRF Arjun Balu (Sujith Kumar) taking the third position.
By the end of Day 1, of the 53 cars, many more than a handful have dropped out – a grim reminder of the uncertainty of rallying and the edgy nature of the Coimbatore track.
With this win, Naren Kumar is now on course to match the long-standing national record of 7 INRC wins by N Leelkrishnan, Red Rooster Racing’s Chief Technical Director.
A delighted Naren Kumar of Red Rooster Racing said “Its nice to be back on the INRC circuit after a three year break. After the first outing in Nasik, it’s nice to be on the podium. I am happy to be driving for Team Red Rooster whose technical expertise and approach towards rallying is world class. We are now looking forward to round 3 in Jodhpur to consolidate our position in the championship.”