Mercedes-Benz is on a roll when it comes to launches in India. The Indian arm of the German automobile manufacturer has launched quite a few models in the last six months such as the E-Class LWB, S-Class Connoisseur’s Edition, G63 AMG, GLS 63 AMG and the GLA facelift. Barely a week ago, the company even launched the GLC 43 AMG Coupe. 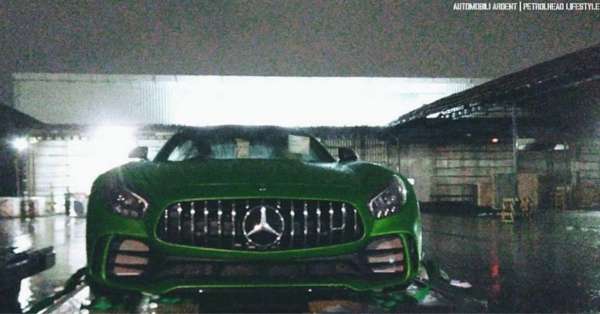 Now, another all new model from Afflaterbach is ready to make its debut in India. This model is none other than the AMG GT-R, which is likely to be launched by Mercedes-Benz in India soon. Although the company has not made an official announcement regarding the launch details, a few images shared on the web reveal that the first unit of the AMG GT-R has landed in India, hinting at an impending launch.

Finished in the signature ‘Green Hell Magno’ paintjob, this AMG GT-R is believed to be the first ever Right Hand Drive (RHD) unit to be manufactured at the company’s plant in Affalterbach, Germany. The model is likely to be headed to Bengaluru where it could share the garage with a range of exotics including a Ferrari 458 Speciale, India’s only Porsche 911 R, a Vorsteiner Novara Huracan and an Aston Martin DBS to name a few. 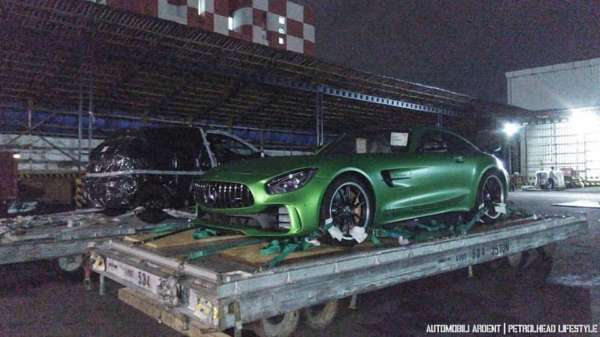 Unveiled last year at the Goodwood Festival of Speed, the Mercedes AMG GT-R sources power from a twin turbocharged 4.0-litre V8 engine. This motor is tuned to produce 577 hp and 700 NM of torque. Paired to a seven speed dual clutch transmission, the model can sprint from 0-100 kmph in just 3.6 seconds, up to a top speed of 318 kmph.