Faster, faster, until the thrill of speed overcomes the fear of death — Burt Monroe

We have all heard or read this quote from the world speed record holder, who featured in the classic ‘The Fastest Indian’. Some non-bikers still think this movie was about Milkha Singh, though. More aware amongst us, however, know that it was a heartwarming story of a legend setting an unbeatable record on a legendary motorcycle marquee. One of his records still holds, just in case you didn’t know. 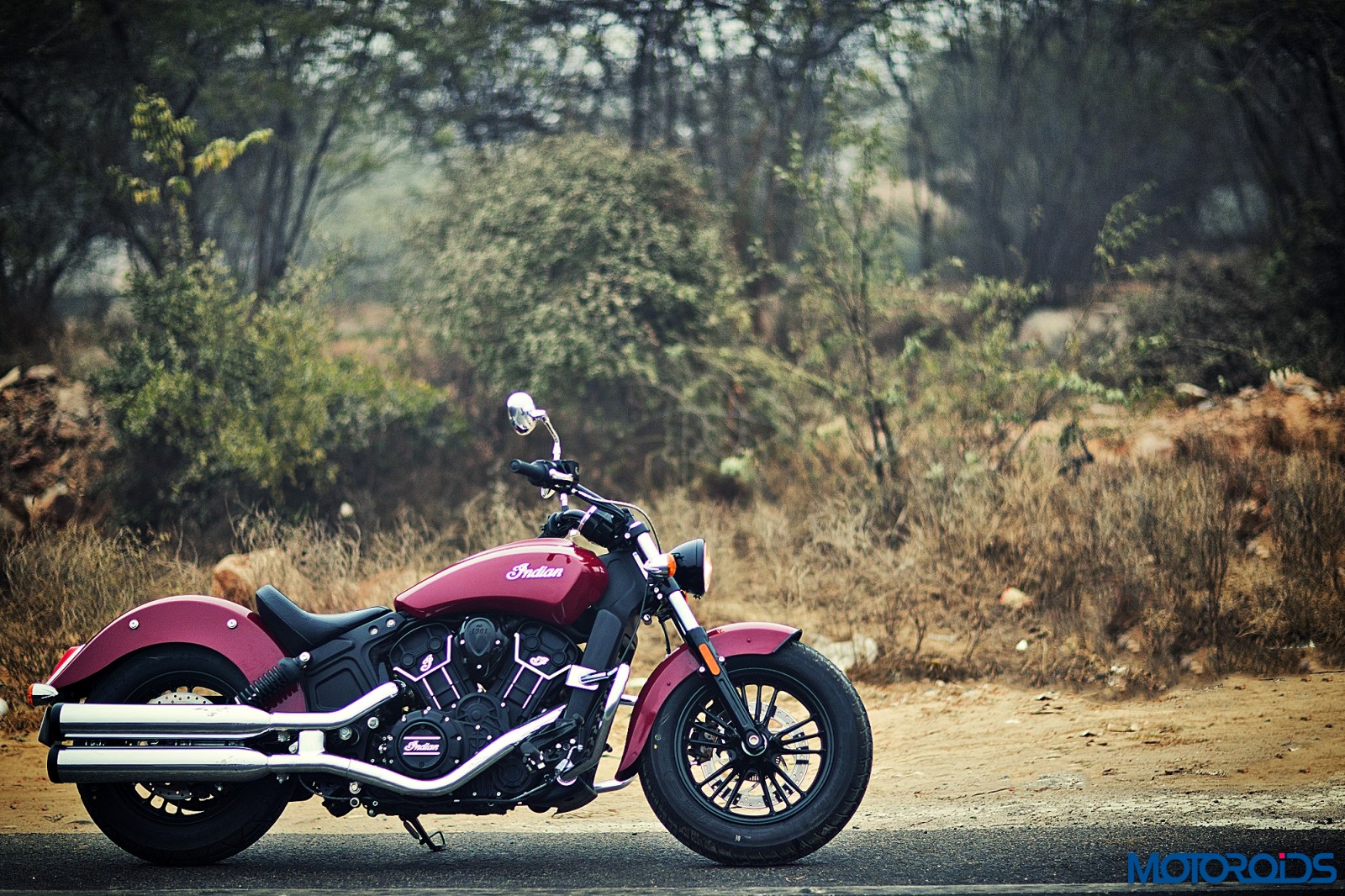 Indian Motorcycles from the USA are named after the native Americans. The oldest existing American motorcycle company was established in 1901 and in its 115 year history, it has gone through some hard times, but has always risen from the ashes like the Phoenix. Indian Motorcycles define craftsmanship and highway cruising like no other. We have ridden some of these machines and we have been mighty impressed with their quality and performance every single time. 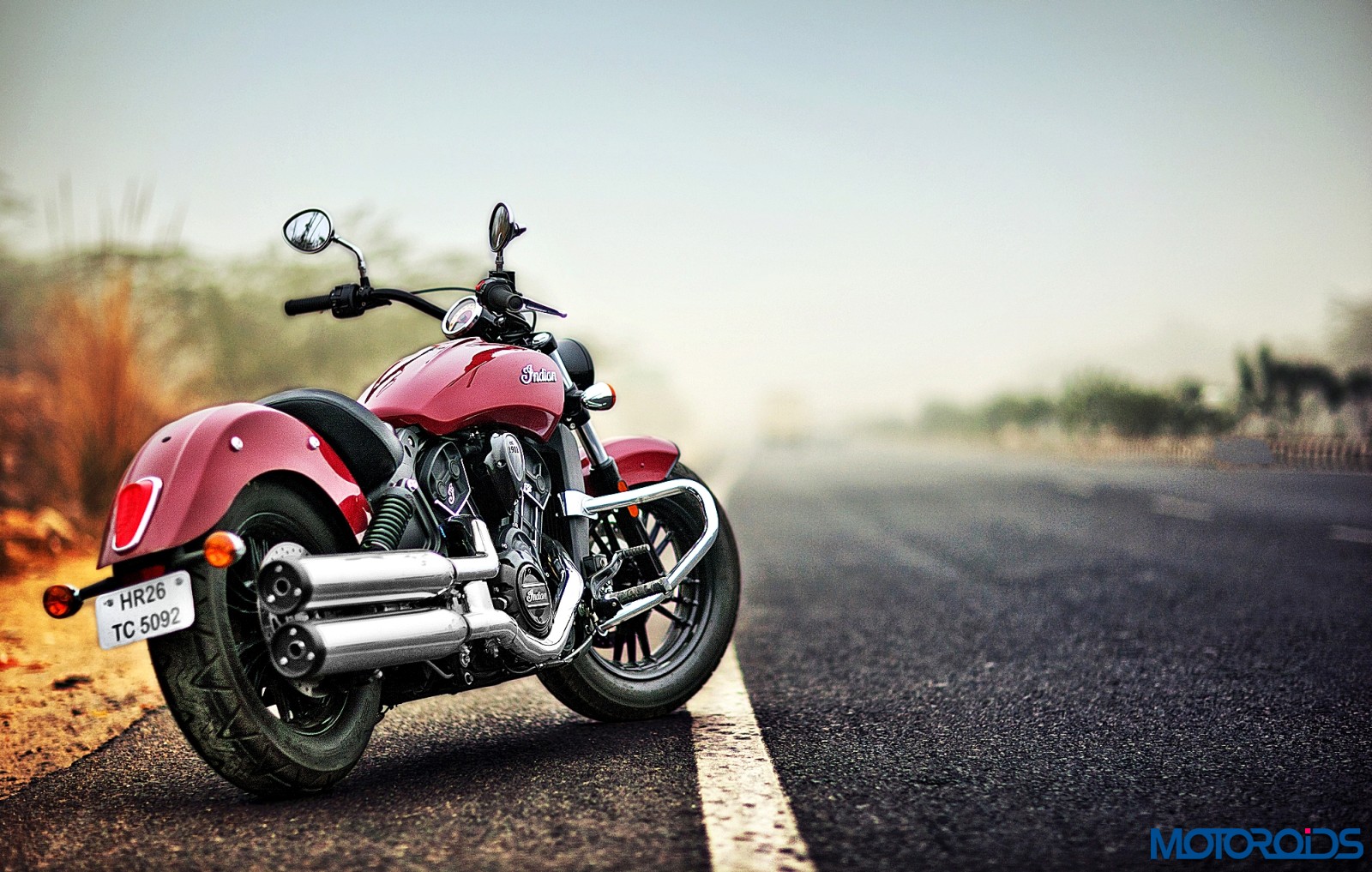 We also recently rode the bigger engined sibling of the Scout Sixty – the Indian Scout. We then got to ride the more recently introduced Scout Sixty. Does the smallest member of the Indian Motorcycle family carry forth the brand name with enough reassurance? Let’s find out 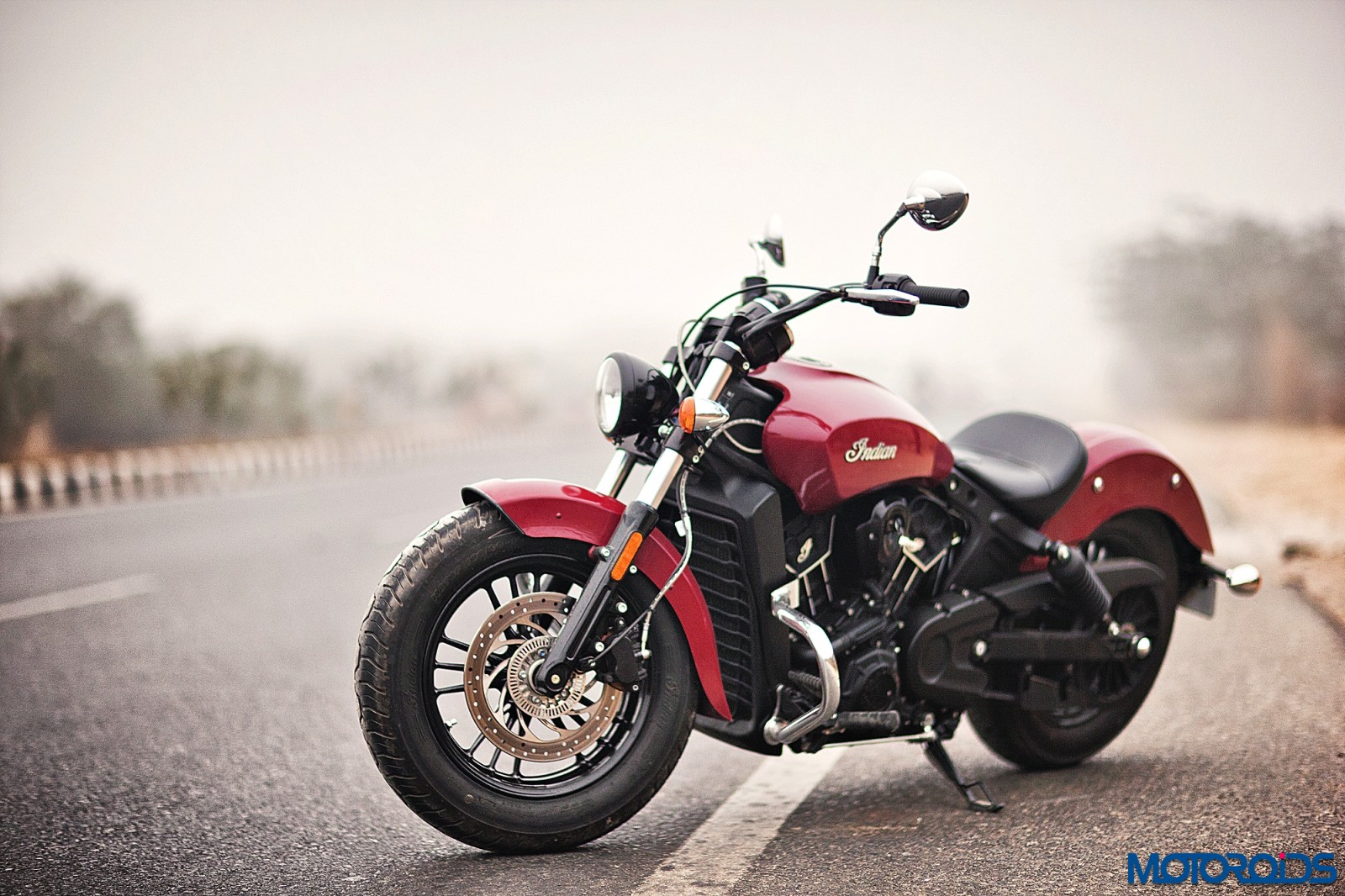 How do I put this – the Scout is like a track and field athlete in a family of wrestlers. Whenever we have ridden any models from the Indian Motorcycle family, we have been mesmerised by the beautifully crafted, grand machines which turn heads wherever they go with their monumental road presence. The Scout sisters look smaller in comparison, but they still have the genes of their bigger siblings. Indian Scout still commands respect, draws attention and rides proud with its head held high. Although smaller than its bigger siblings, this one here would still dwarf most other two-wheelers on the road, including quite a few American cruisers. 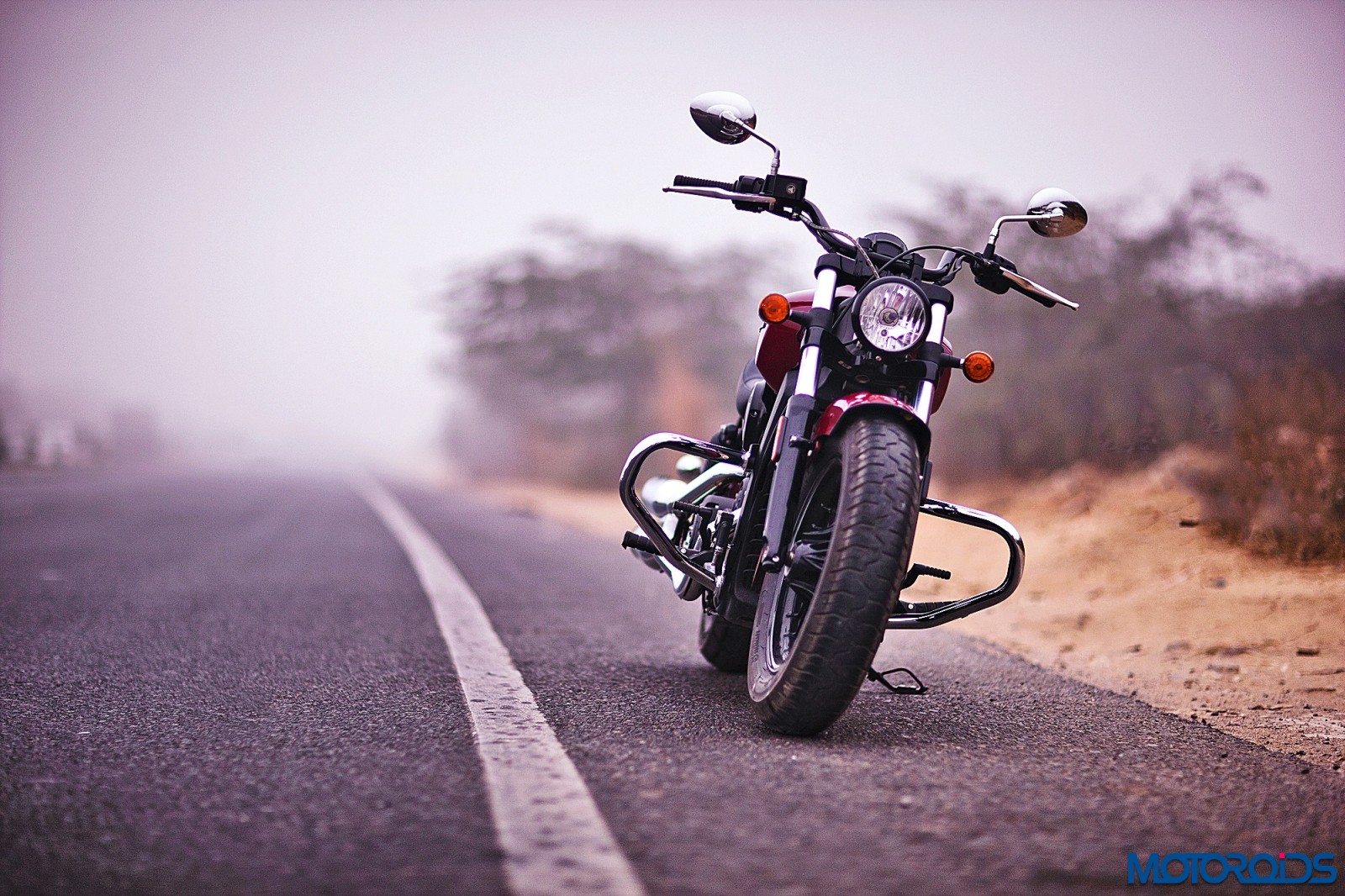 Compared to the Scout, the Scout Sixty gets a smaller engine – it’s a 999 cc unit instead of the Scout’s 1,133 cc and has one less gear. The engine produces 77 hp of power and 88.8 Nm @5,800 RPM of torque. In terms of transmission, the blokes at Indian Motorcycles have removed the fifth gear from the Scout so the sixth gear from the bigger model becomes the fifth gear for the Sixty. The motorcycle gets its name ‘Sixty’ from its 60 Cubic inches of displacement, as measured by Americans in their units. The chassis, suspension, liquid cooling, and every other component remains the same as the Scout except for some styling bits which we’ll describe later. The Scout Sixty is also almost INR 2 Lakhs cheaper than the Scout. So you get a little less powerful but an equally stunning bike. 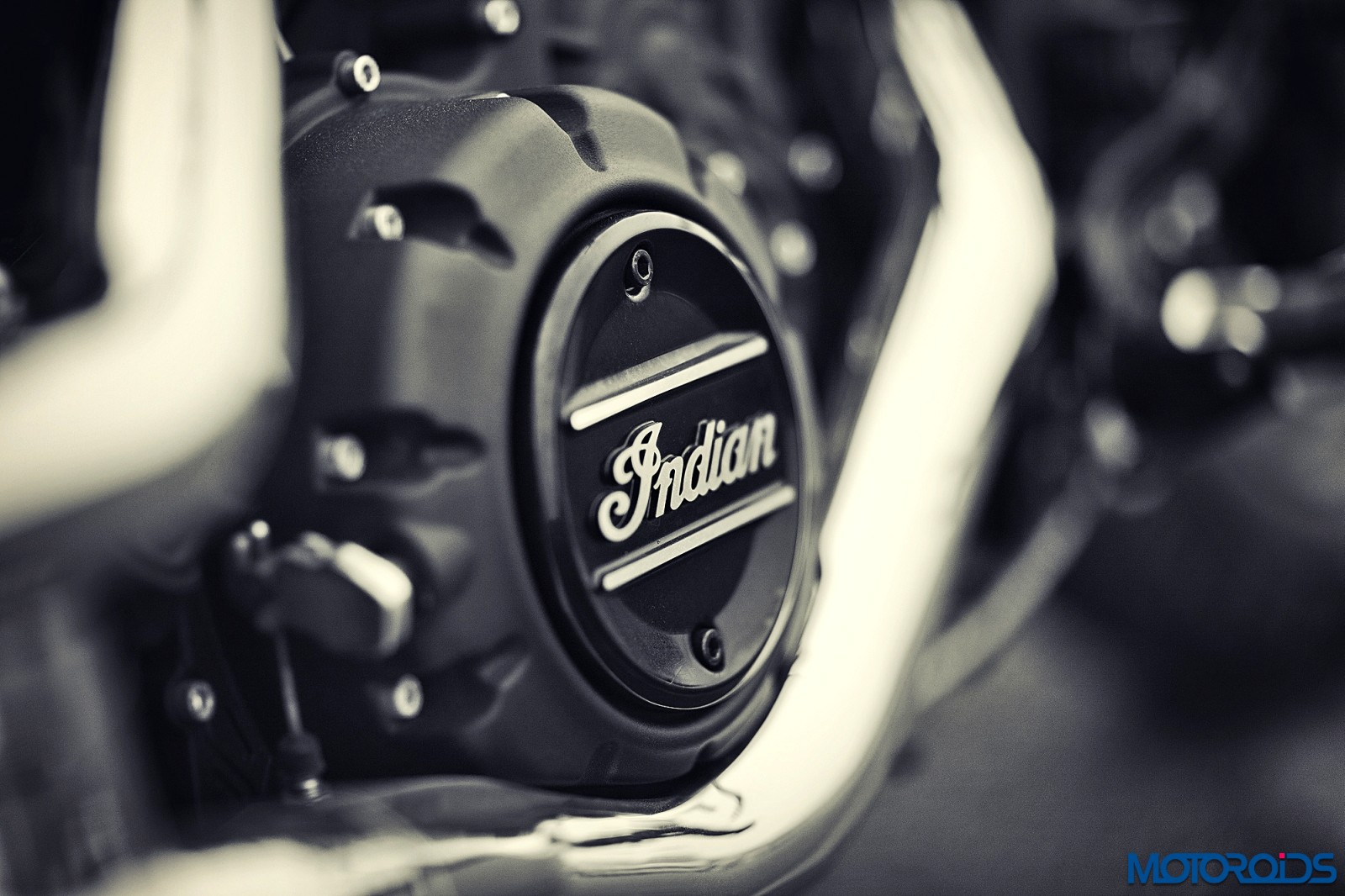 As you would imagine with a brand as legendary as Indian, the Scout has some history dissolved in its name. In olden times, a Scout was sent out to uncharted territories to understand the topography, discover the easiest ways to tread and come back with all that information without getting noticed. The Scouts, thus, would sense the territory and gather intelligence before the Chief got out for an invasion, or some other form of a more serious mission. As you would imagine, then, the Scout is a lighter, peppier, and more approachable Indian than the Chief which represents the authority and might of, well, the Chief.

The Indian Scout Sixty is a low slung bike, with fat tyres, a sculpted fuel tank and a black shaded engine with silver highlights. The beautiful fuel tank which is angular, yet curvy, merges into the leather clad single seat with the rear fender rising above the seat. A vertically laid out tail lamp on the rear fender is lined by fine chrome.  The rear fender doesn’t have any other garish ornamentation except being flanked by two round, orange indicator lamps set in crhome housing.

The Scout Sixty shares all its major components (except for the engine) with the bigger Scout. This one, however, has a slightly different facial makeup. Most noticeable difference is the black engine with much less chrome highlighting as compared with the generous lashings the bigger Scout receives.

Seat colour is black, unlike the tan shade found on the Scout. The smaller Sixty also misses out on its model name “Scout” from the fuel tank with only the brand name ‘Indian’ inscribed with chrome lettering. The bigger Scout gets a full ‘Indian Scout’ branding on the tank. We love the stacked twin exhausts which somewhat look like an oversized double barrel rifle finished in the finest chrome known to man. 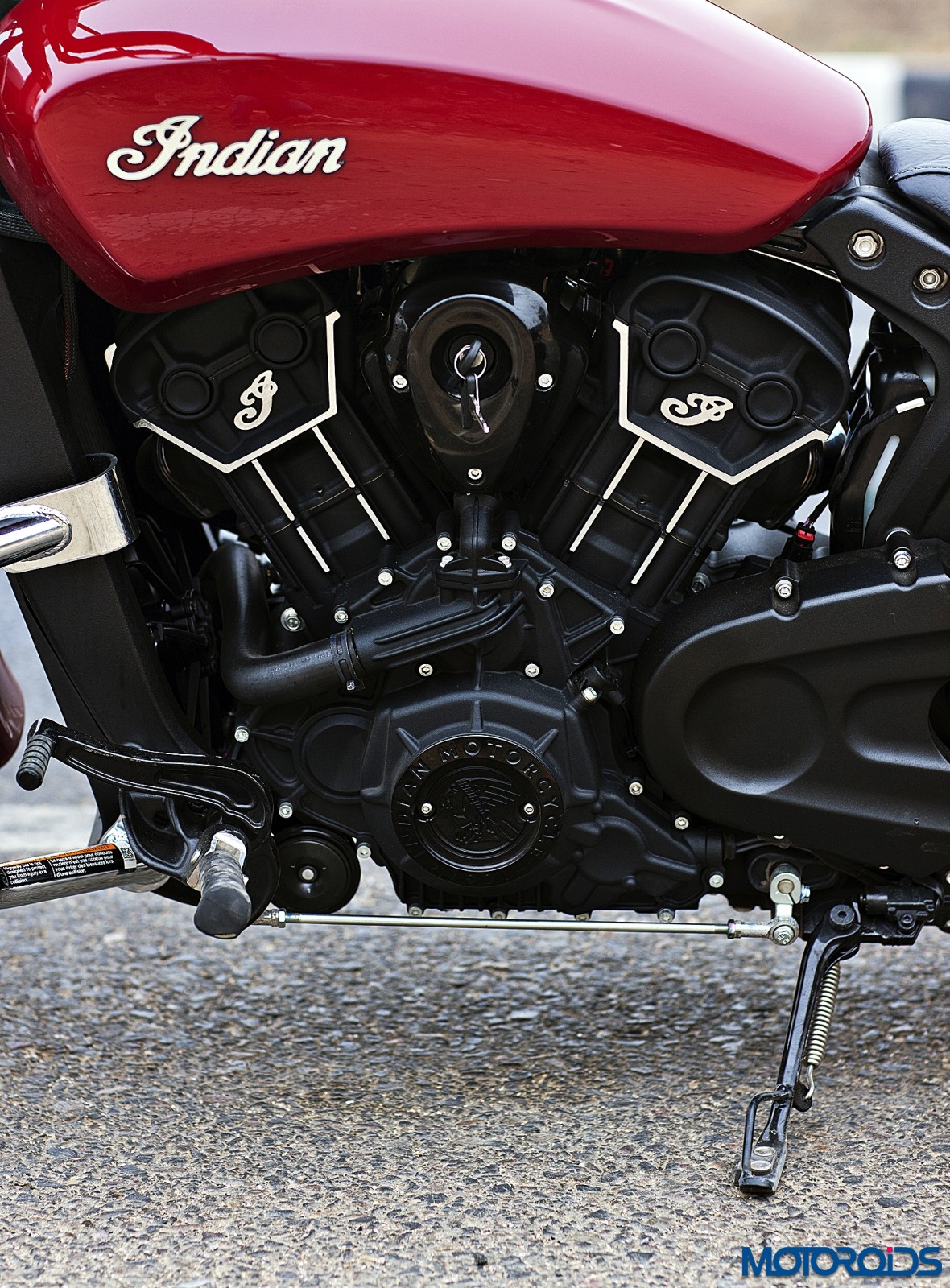 As we have always mentioned about Indian Motorcycles, the attention to detail is simply astounding. Not only is the machining and milling of the engine marvellous, the cylinder head gets highlights for valves along with the ‘I’ from the Indian logo inscribed in each cylinder head of the 60 degree V twin engine. There is ‘Indian’ written in several places including on the rear shock absorbers, the chrome surrounding the tail lamp bulbs and many other places. In addition, Indian’s iconic ‘I’ is inscribed on levers. Heck, even the tyres are made exclusively for the brand, and have ‘Indian’ branding on them. 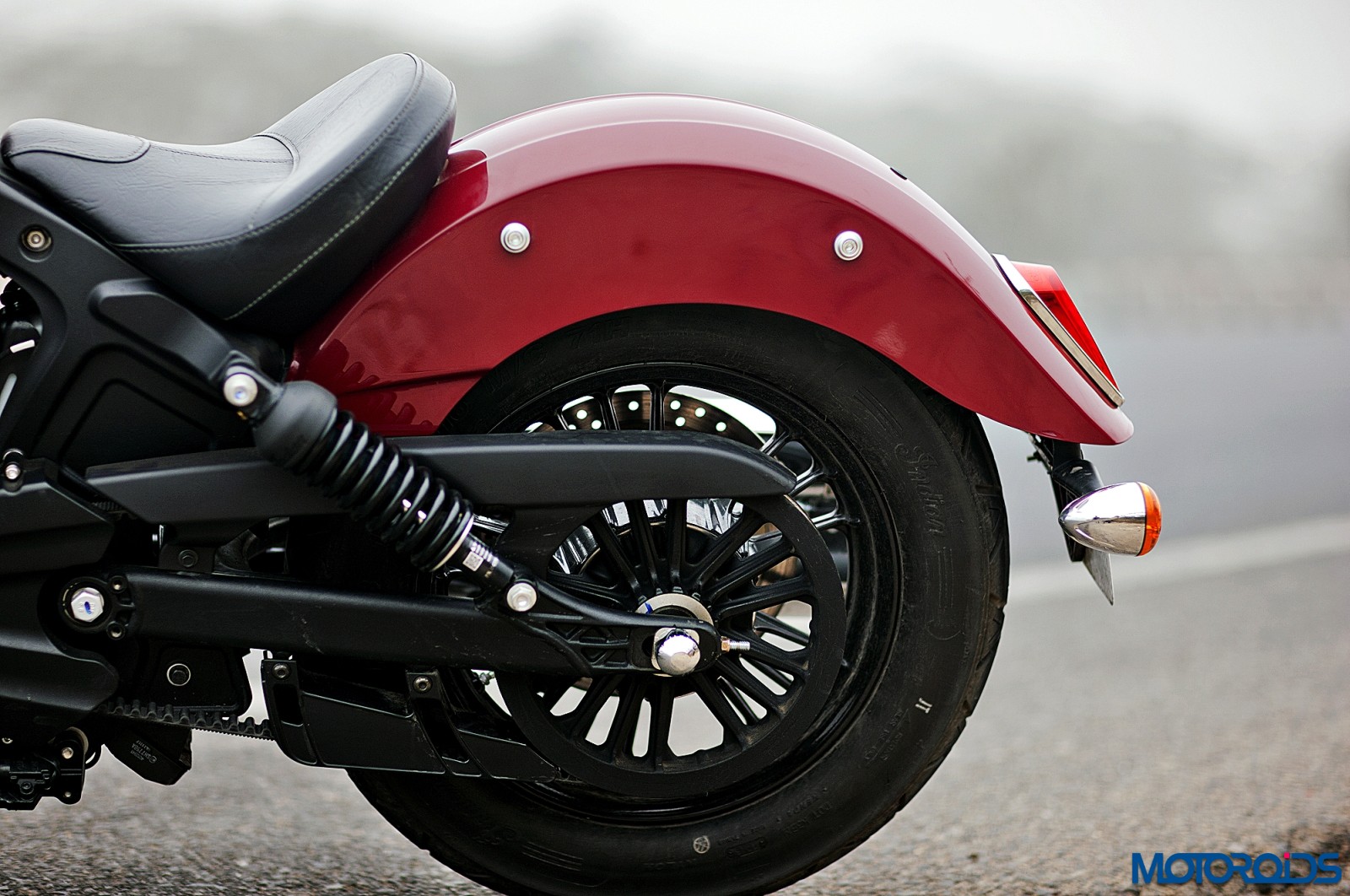 Modern features sing in unison with the classic heritage. Tail lamps are LED units, while the classical instrument cluster is a combination of a digital readout blended into an analog speedo. When you turn the ignition on, the unusually high number of telltale lights on the instrument cluster light up like a Las Vegas casino. Fuel gauge is missing but a low fuel lights comes up when the bike is low on fuel. 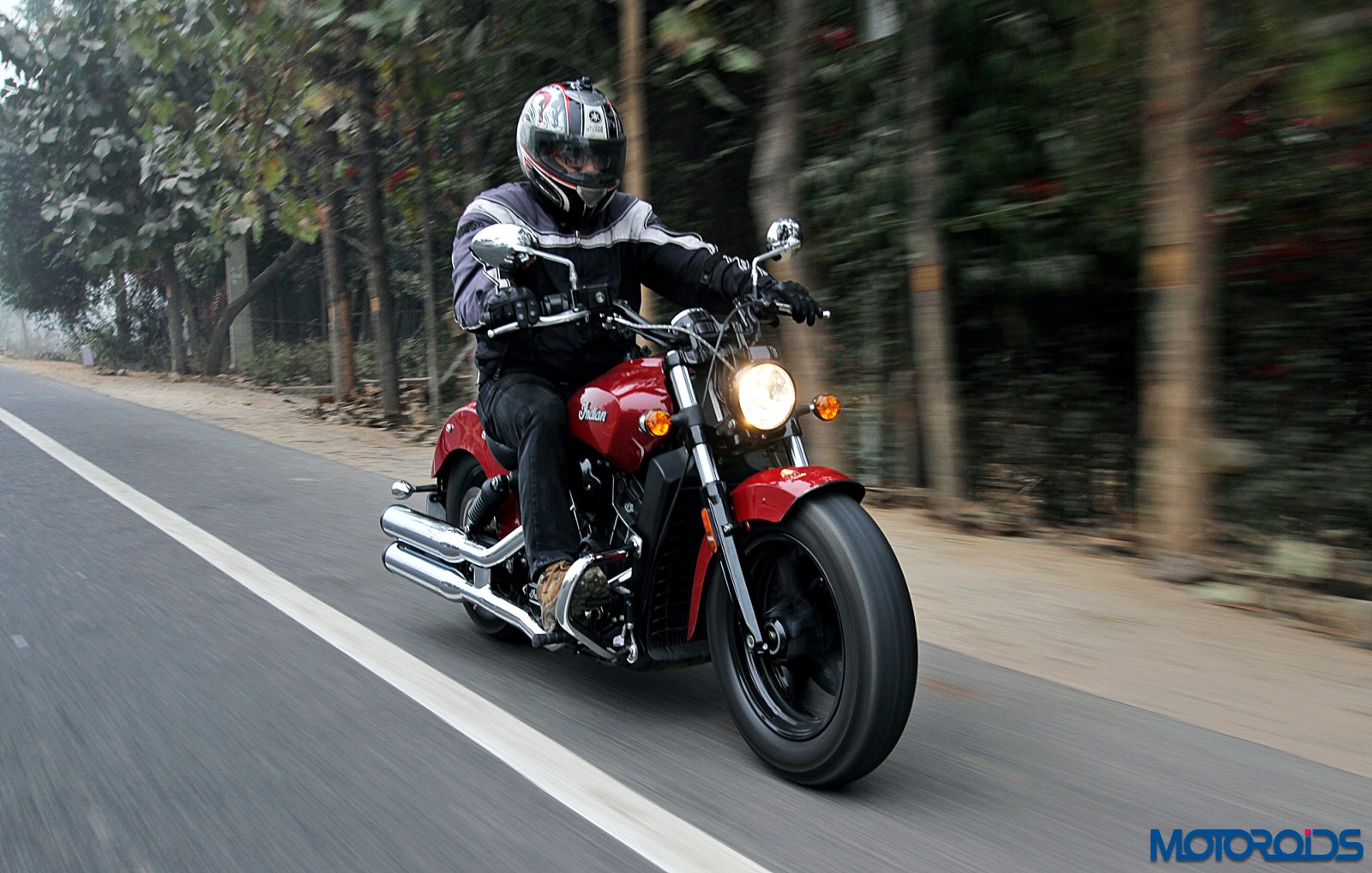 One may tend to believe that 1000 ceecees isn’t enough displacement for a big cruiser. Well, don’t be fooled, for this one here is an eager machine, and like its bigger Scout cousin, loves to rev. Unlike the lazy, reluctant character of several other American cruisers, this one loves being revved, and is delighted to see its tacho needle do its little dance all the way to the redline.

Shift into first, open the throttle and the bike pulls ahead in a manner uncharacteristic of cruisers – it’s uncannily quick and revvy. Almost instantly, you get shoved back, and unless you are holding on properly to those handlebars, you would get a real scare as an admonishment for thinking of this one as a slouch. 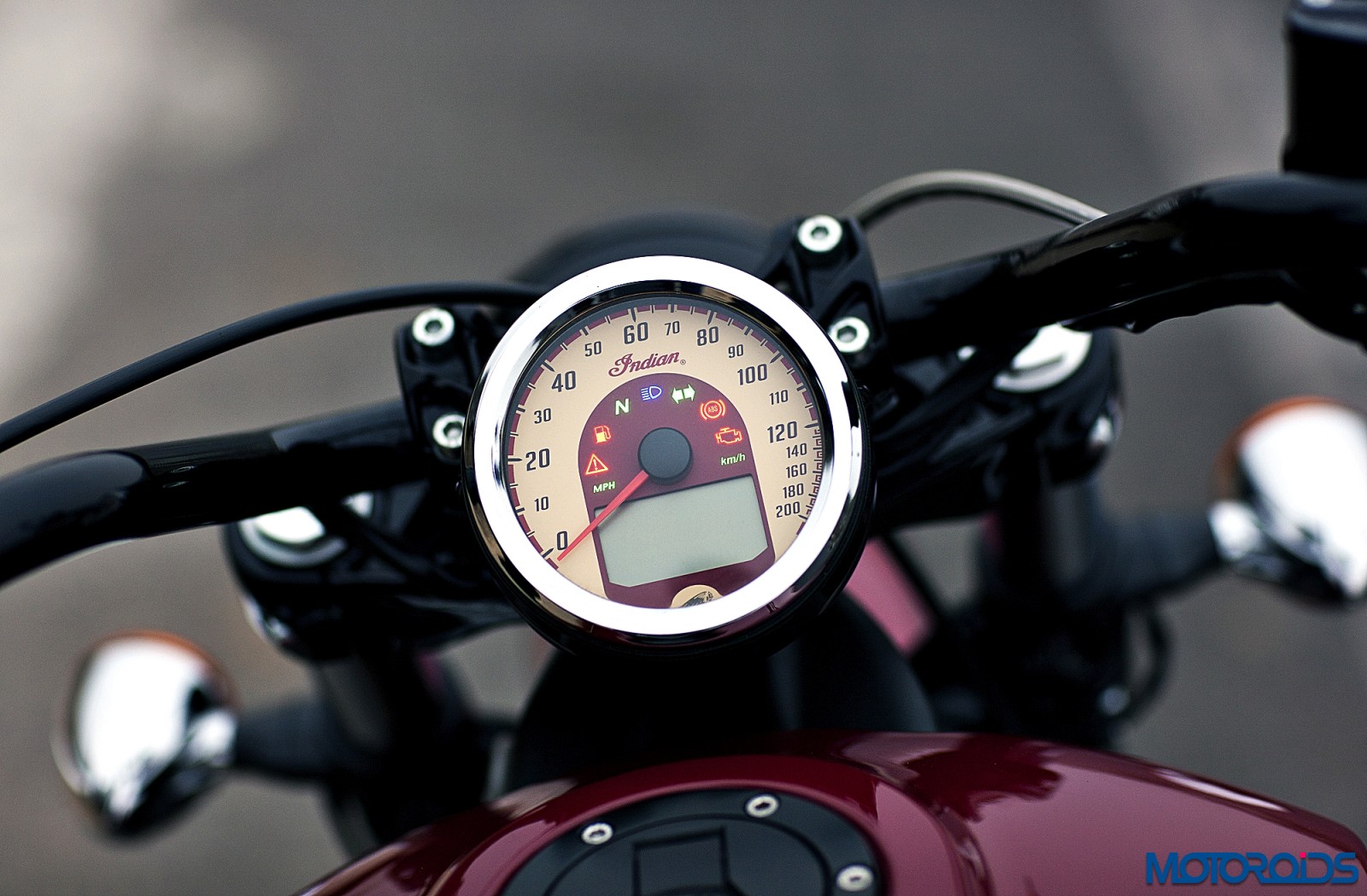 Gear shifts are smooth and so is the power delivery. With a meaty low and mid-range, the Scout Sixty can be ridden gingerly in higher gears at lazy revs, though it would come alive almost instantly, in any gear should you roll that throttle even gently towards yourself. There are a few vibes to be felt in the upper echelons of the rev spectrum when you rev the engine hard, but you never get a sense of the motor being stressed or complaining.

Cruisers traditionally do not come equipped with tachometers, though, on the Scout Sixty, one can see the RPM readings on the digital instrument cluster. With a healthy low end torque and meaty mid-range one need not look at it though. The Scout Sixty builds pace quickly and you would have hit triple digit speeds much before realizing it. 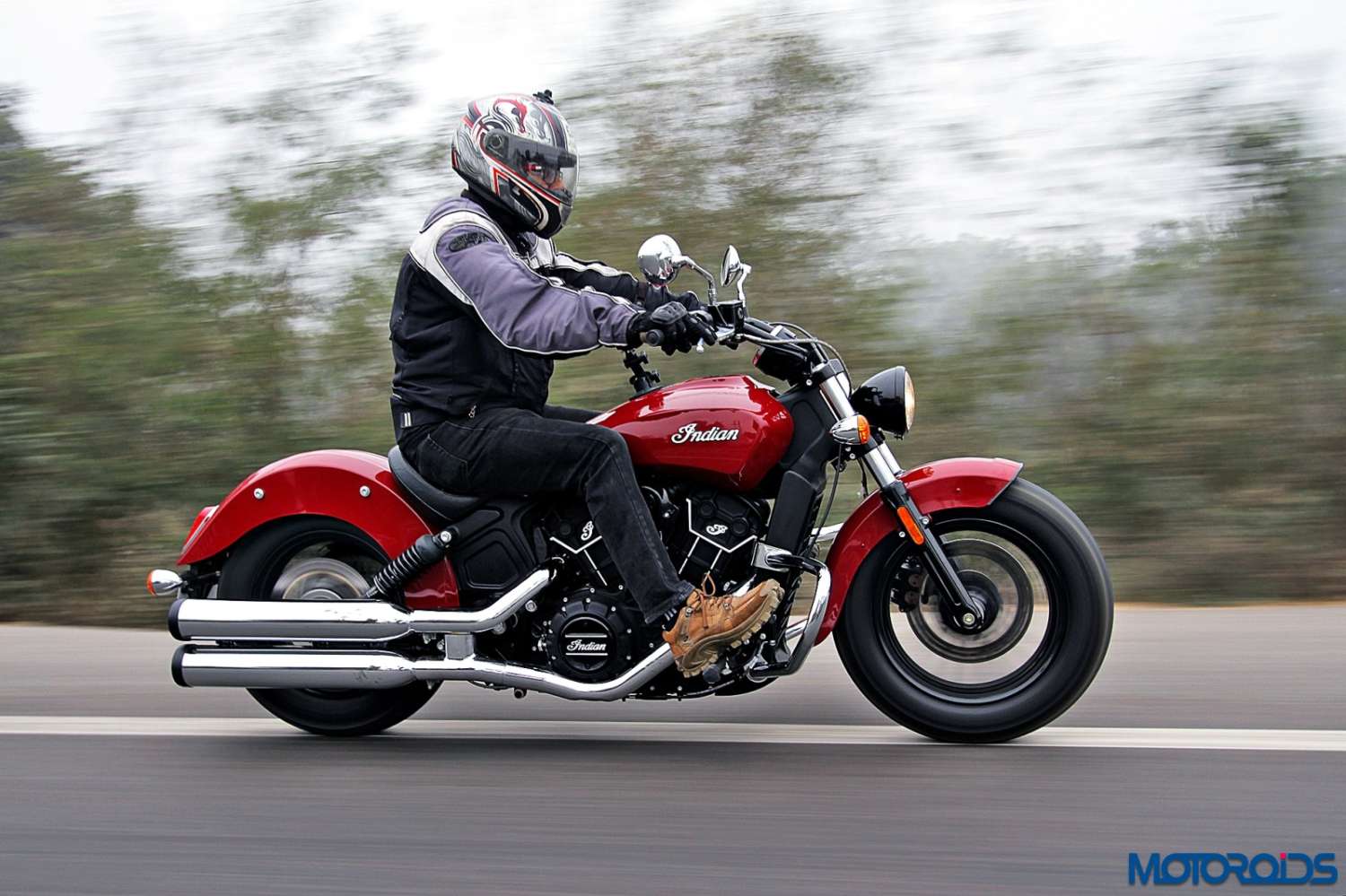 However, it isn’t your litre class supersport either and after getting you to a reasonably heady velocity it would remind you gently that it’s a cruiser after all. You would reach a ton and a half rather briskly, beyond which the Scout Sixty wouldn’t appreciate your aggressive behaviour too much. The climb thereon is relatively slow, and the bike doesn’t feel too comfortable managing those velocities.

On a positive note, the sense of speed on the Indian Scout Sixty is rather pronounced in a thrilling way. The lack of a wind deflector on our unaccessorized test bike meant that anything above 1oo kph felt faster than the actual speed.  With a low set stance and a potent engine, the bike feels quick in a thrilling manner. At times it feels like a fusion between a cruiser and an aggressive street fighter.

Don’t get me wrong here, the Indian Scout Sixty feels pretty stable at high speeds – it’s just that the stance and the character of this machine  begs you to ride it at a leisurely pace. You sit upright with legs stretched out for the far placed levers and have a good view of the road. Why would you want to turn a beautiful scenery into a blur? Rather sit back in the comfy seat and enjoy the view. 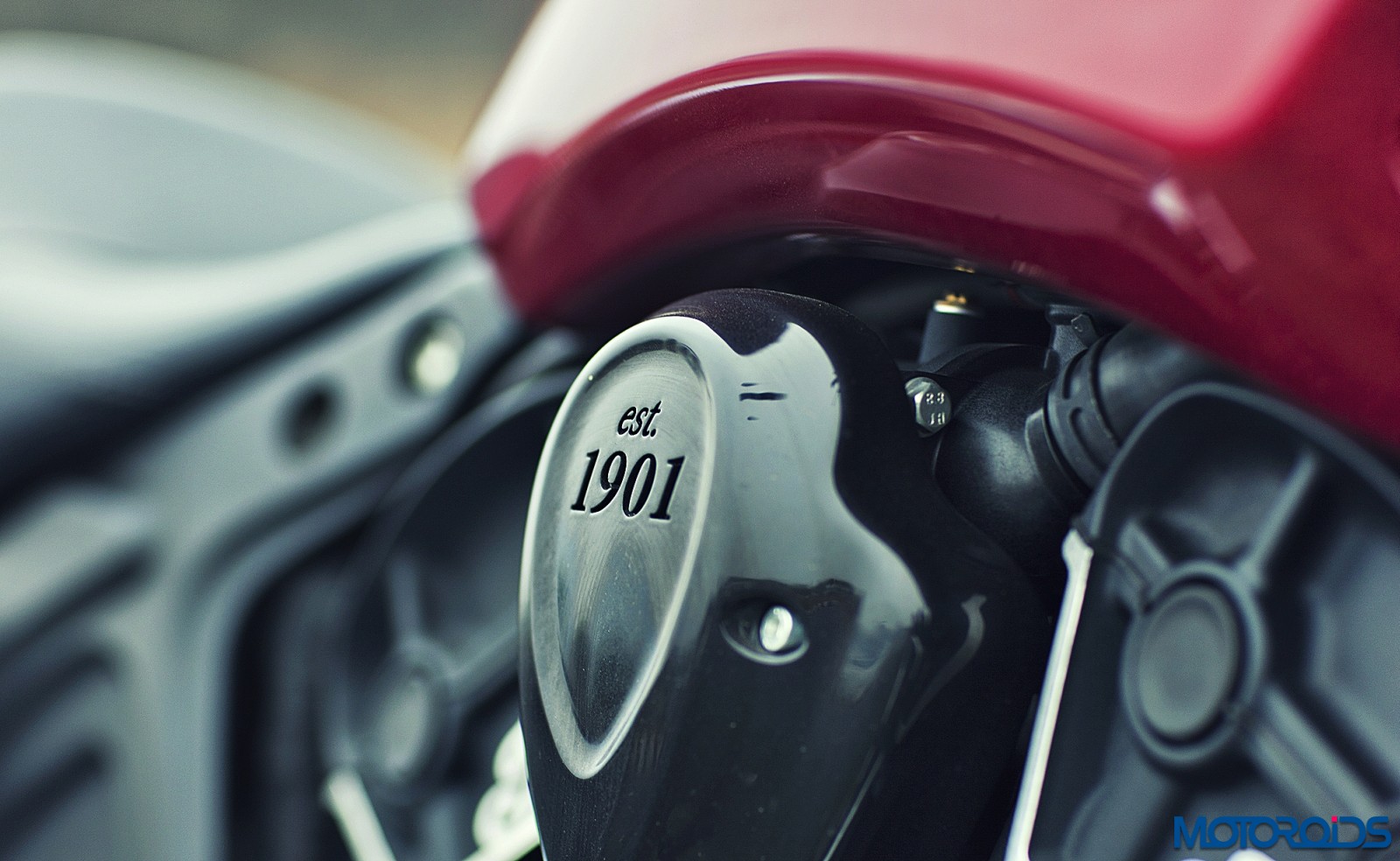 As mentioned before, the test bike was in its bare minimum avatar and I had the wind hitting me in the face whenever I took liberties with wringing that throttle. I believe with the optional wind shield, the backrest and preferably some beautiful company in the optional back seat, the ride would be far more enjoyable.

Riding on the smooth Gurgaon Faridabad road, the ride quality felt comfortable. I deliberately took a few B-roads roads to test the suspension though. The Indian Scout gets conventional telescopic forks upfront and dual shocks at the rear. However, unlike other conventional cruisers, the setup here is relatively firm. With limited travel at both ends, the ride quality isn’t as plush as on some other cruisers we have ridden. It’s set on the firm side, which makes the Scout Sixty feel nice and taut when you lean it over, but in turn lets some of the roughness from the roads filter through the seat into the back. However, despite the low ride height, I never witnessed the bike scraping any of the speed breakers.

As mentioned, the firm suspension does make the handling unusually good for a large cruiser. The bike holds its line well around bends, is relatively devoid of the soft wobble most such bikes suffer, even under braking, leans in well and takes corners in its stride with élan. Even the front foot-pegs are high set and do not scrape precariously, as they do on a few other low slung cruisers (Street 750 comes straight to my mind). The brakes lack the desired bite though. Knowing the weight, speed and the resultant momentum it carries, the Scout Sixty would have done well with a dual front disk brake setup. 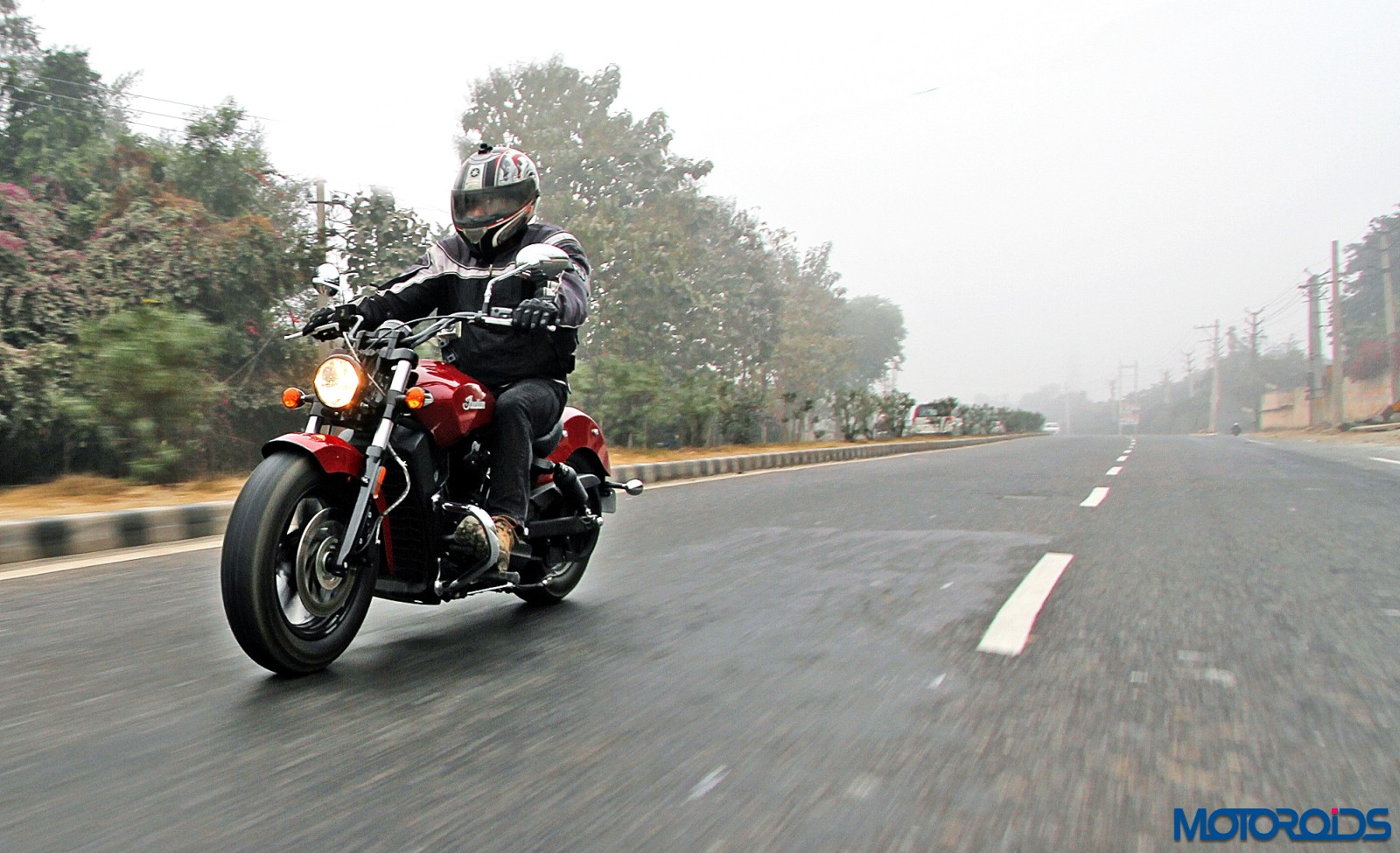 Despite being the smallest member in the Indian family, the Scout Sixty still remains a cruiser with a relatively large wheelbase and hence its isn’t exactly a traffic cutter. It’s manageable, though, and with its good blend of low end torque and revviness, can serve as an accomplished daily ride, given you do not have to wade through slow moving traffic. The liquid cooled engine remains poised, keeping its temperature well within acceptable limits and isn’t a cause of concern in traffic. 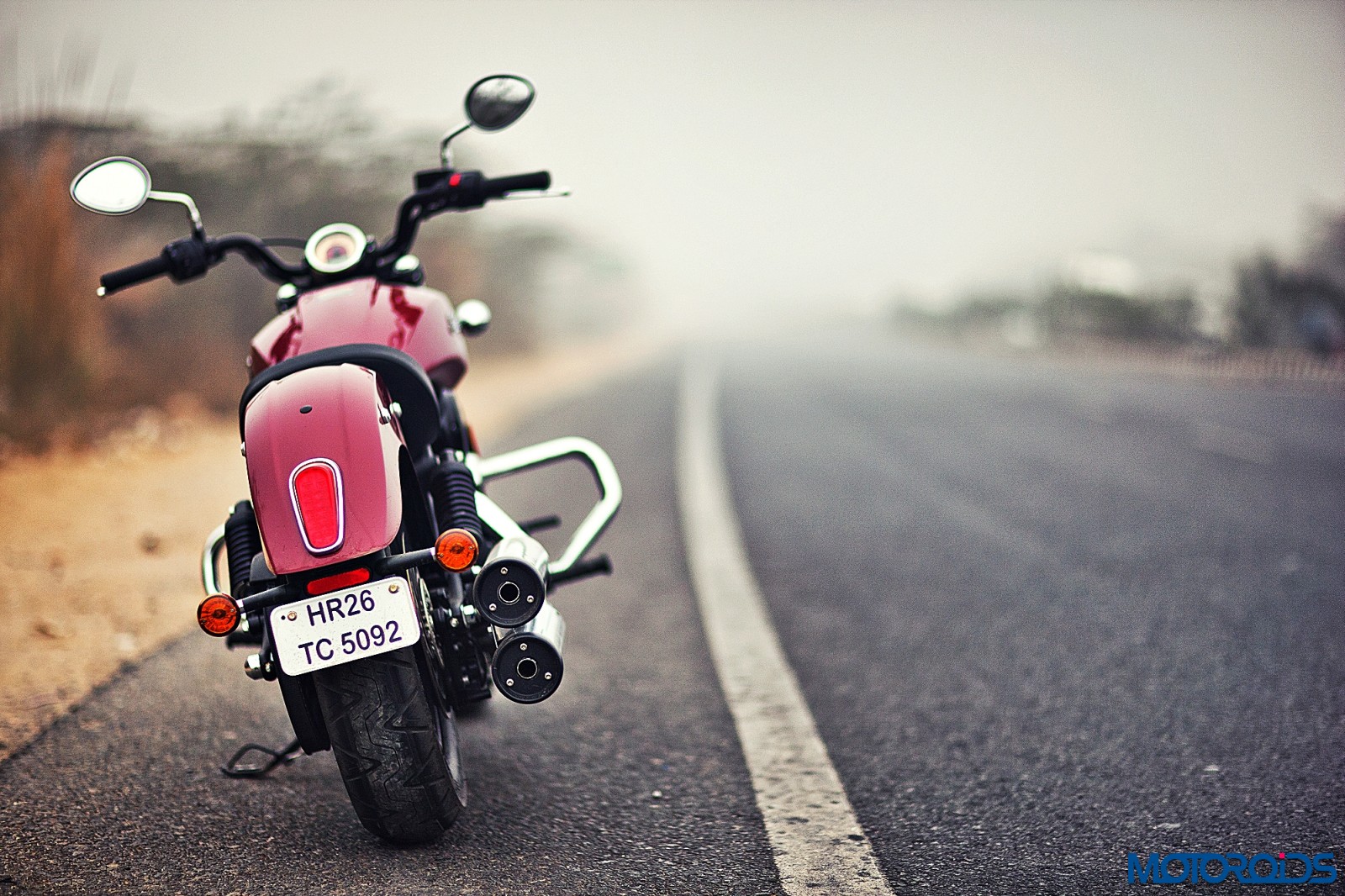 The Indian Scout Sixty’s closest competitor is the Harley Davidson Iron 883 and compared to its nemesis, the Indian Scout Sixty is bigger in dimensions, has a lower seat height, has more power and looks like a better, more premium package in every way. It costs about INR 4 lakh more, though. 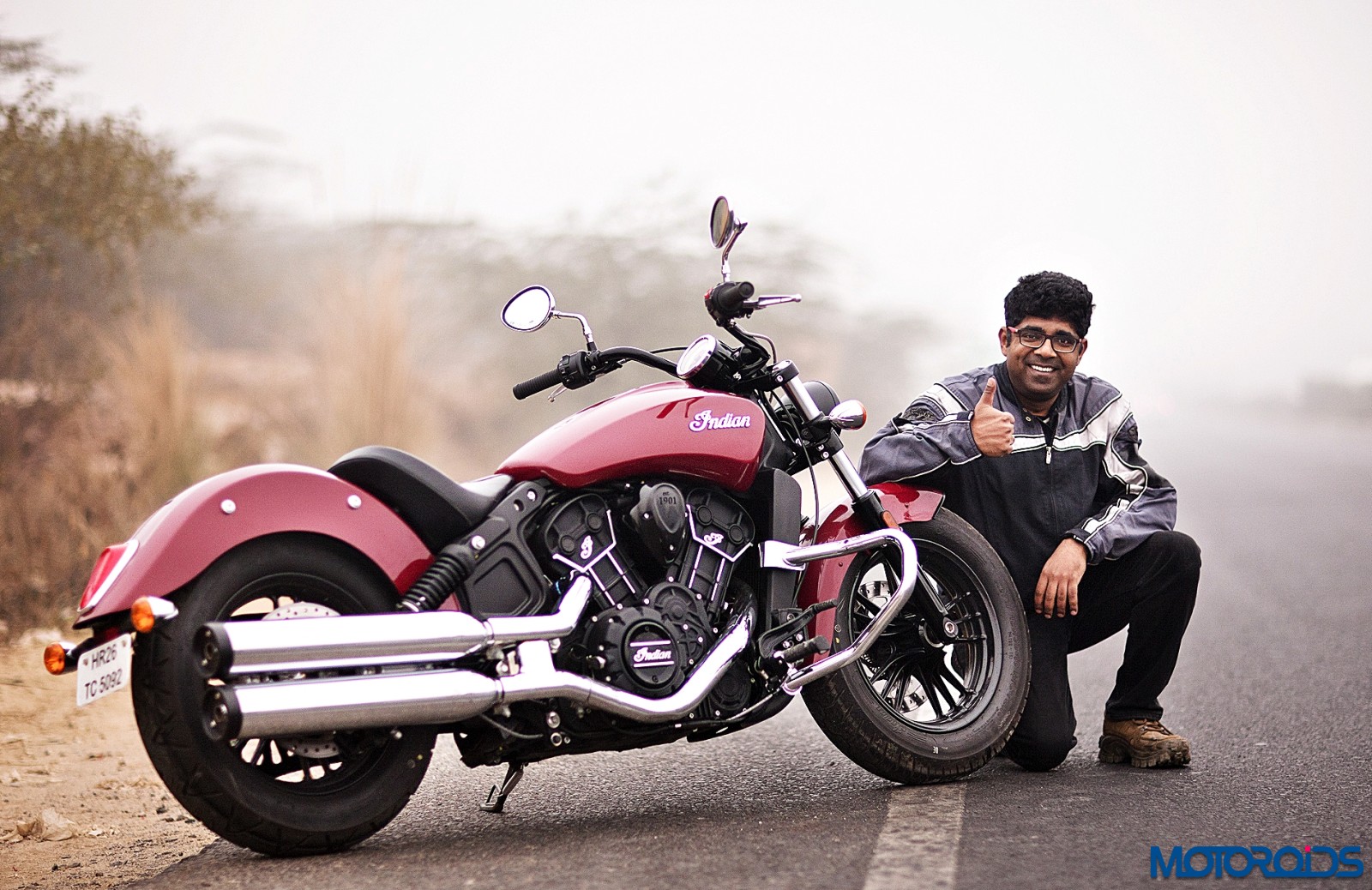 In Conclusion, the Indian Scout Sixty is the most economical way to own an Indian Motorcycle. it’s an uncompromised piece of kit, and wears the hallmarks of Indian Motorcycles like craftsmanship, presence, performance and exclusivity in a splendid fashion. Do check this beast out if you’re looking for a Cruiser under INR 15 lakh.