Home Indian Motorcycles Indian Scout Review : The Big and the Small of it

Human brain is a beautifully complex creation of nature, storing all the memories, safely locked into its incomputable storage. Those treasured memories could be triggered by anything – it could be that fish stew you had last night, or a song that may have been lost in the huge collection of audio in your phone. So, as I walked into the Indian Motorcycles’ dealership to pick up the Scout, my brain brought back the memories of my stint with the Indian Chief Vintage and the Indian Chieftain from a few years ago. 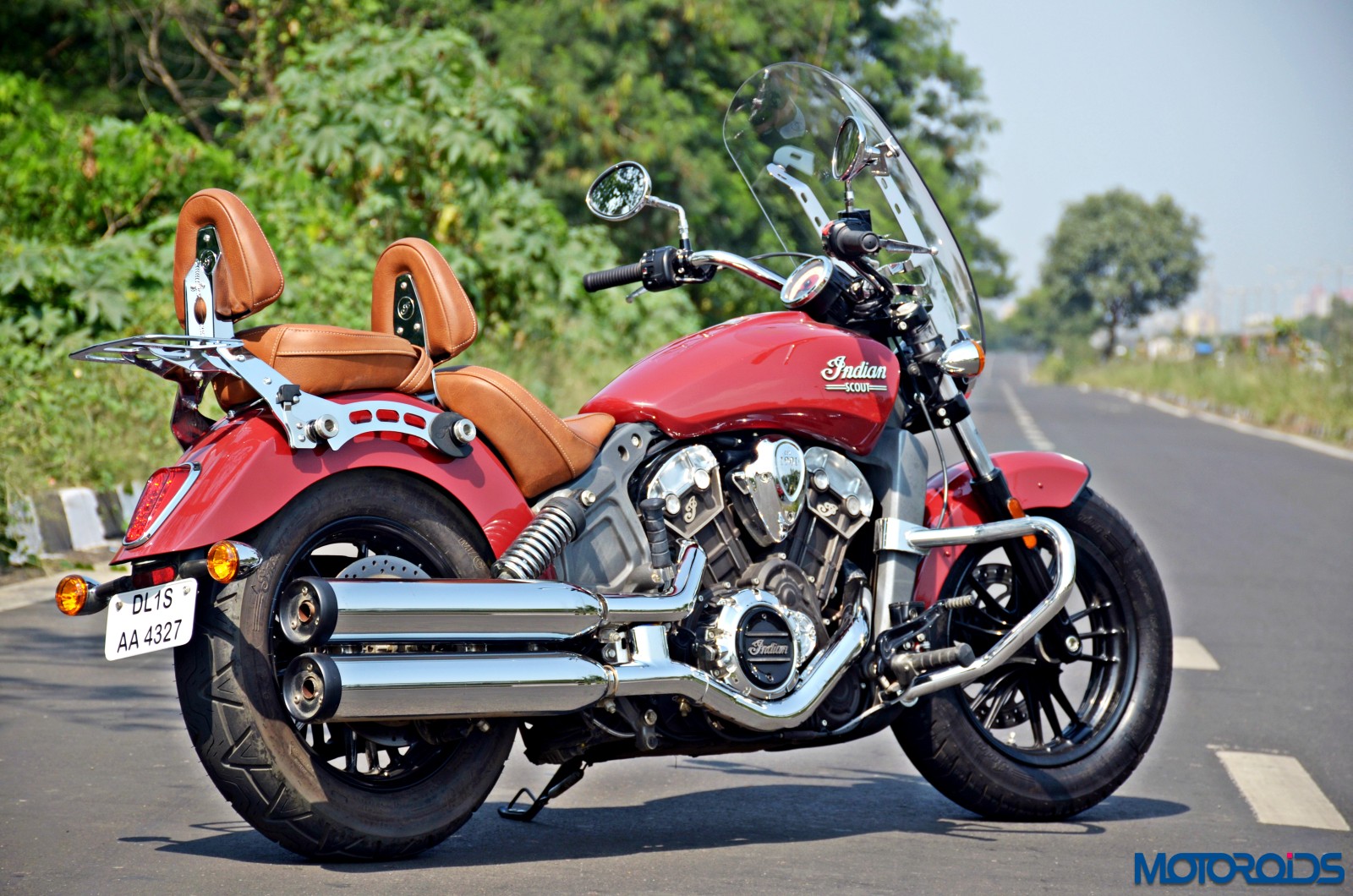 It was a warm October afternoon when I got my hands on the Scout and with the mercury level almost nudging 40 degrees, and rising by the minute, I wasn’t too keen on riding the cruiser until the sun dropped down a little. But then, as I thumbed the starter, put the transmission in first gear and rode away, I realised that this will be more than just a laid back, conventional cruiser ride. This one here likes to be revved, and it builds speed faster than you could expect a motorcycle of this variety to. 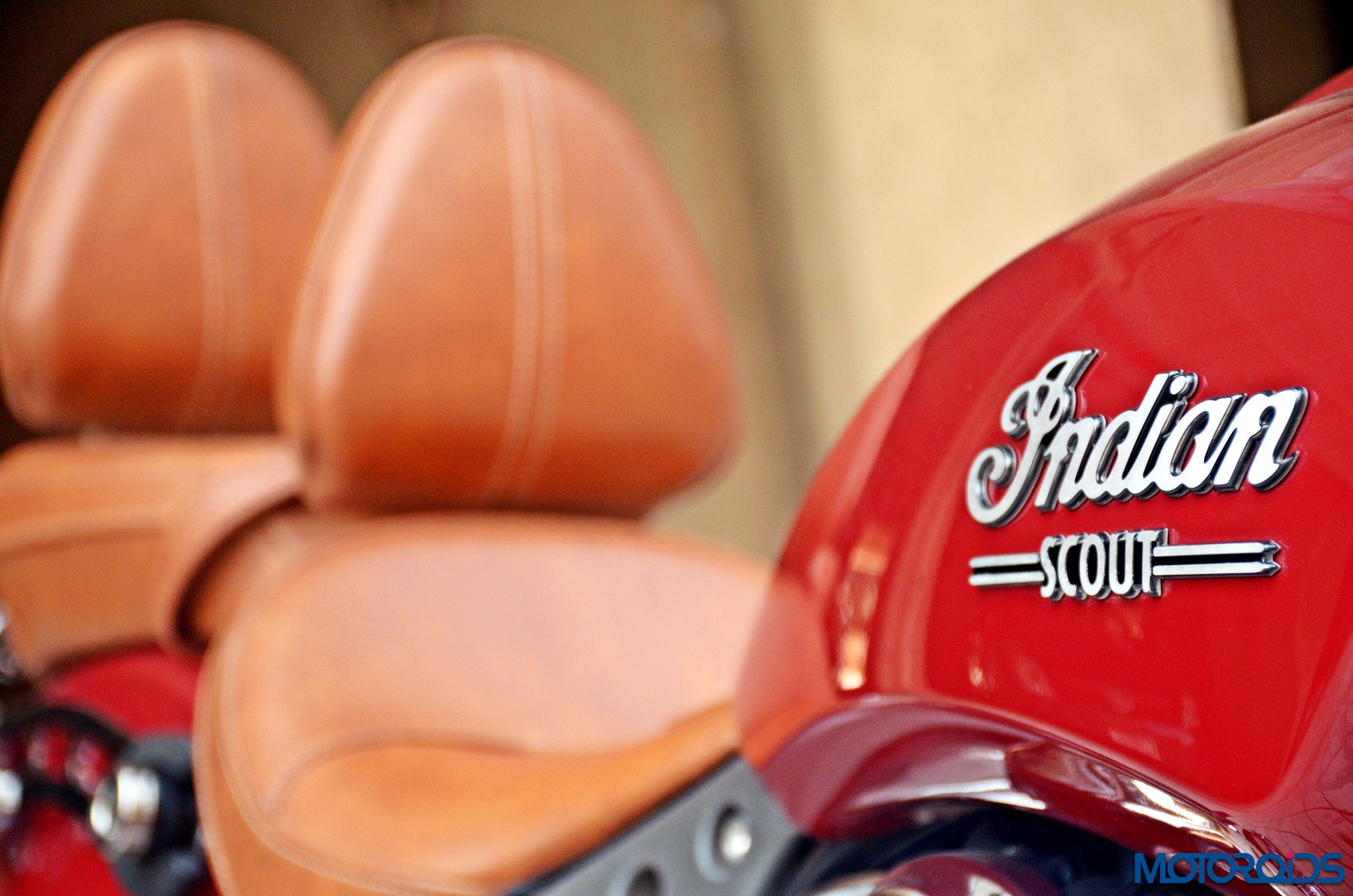 Here are a few things about the Scout that made me fall in love all over again with the Indian Motorcycles brand:

1. Similar to any Indian Motorcycles’ product out there, the Scout is a definite attention grabber. No matter where we took it, almost everyone – already awestruck by the design – would walk up to us, enquiring about the details. Well, it doesn’t have the enormous dimensions some other Indian Motorcycles boast, but it’s every bit the American cruiser the brand is known for. The Scout we had was the accessory laden version with rider and pillion backrest, and adjustable windscreen and everything was astoundingly put together. The build quality reflects the standards that Indian Motorcycles have maintained with all their products. The classic design is enhanced with modern equipment such as LED tail light and a semi-digital analogue instrument cluster with a digital display. 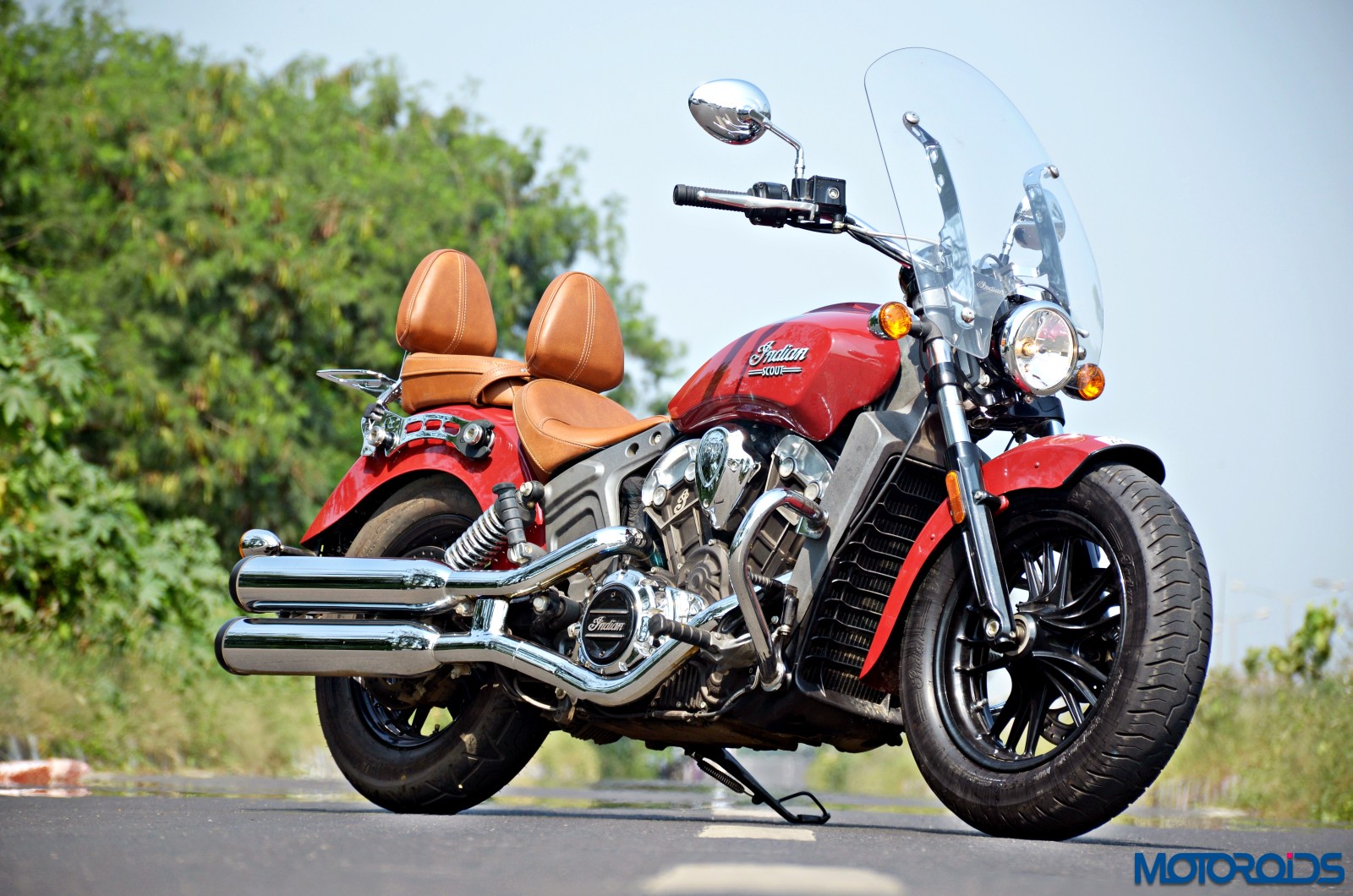 2. Speaking of the classically styled instrument cluster, the single pod unit gets an analogue speedometer, a digital display and tell-tale indicators which display all the necessary ride information. Well, it does miss the fuel indicator but a low fuel warning light will let you know when it’s time to fuel up. The digital display holds tachometer, odometer, two trip meters and a clock. It’s compact and stores just the necessary information. 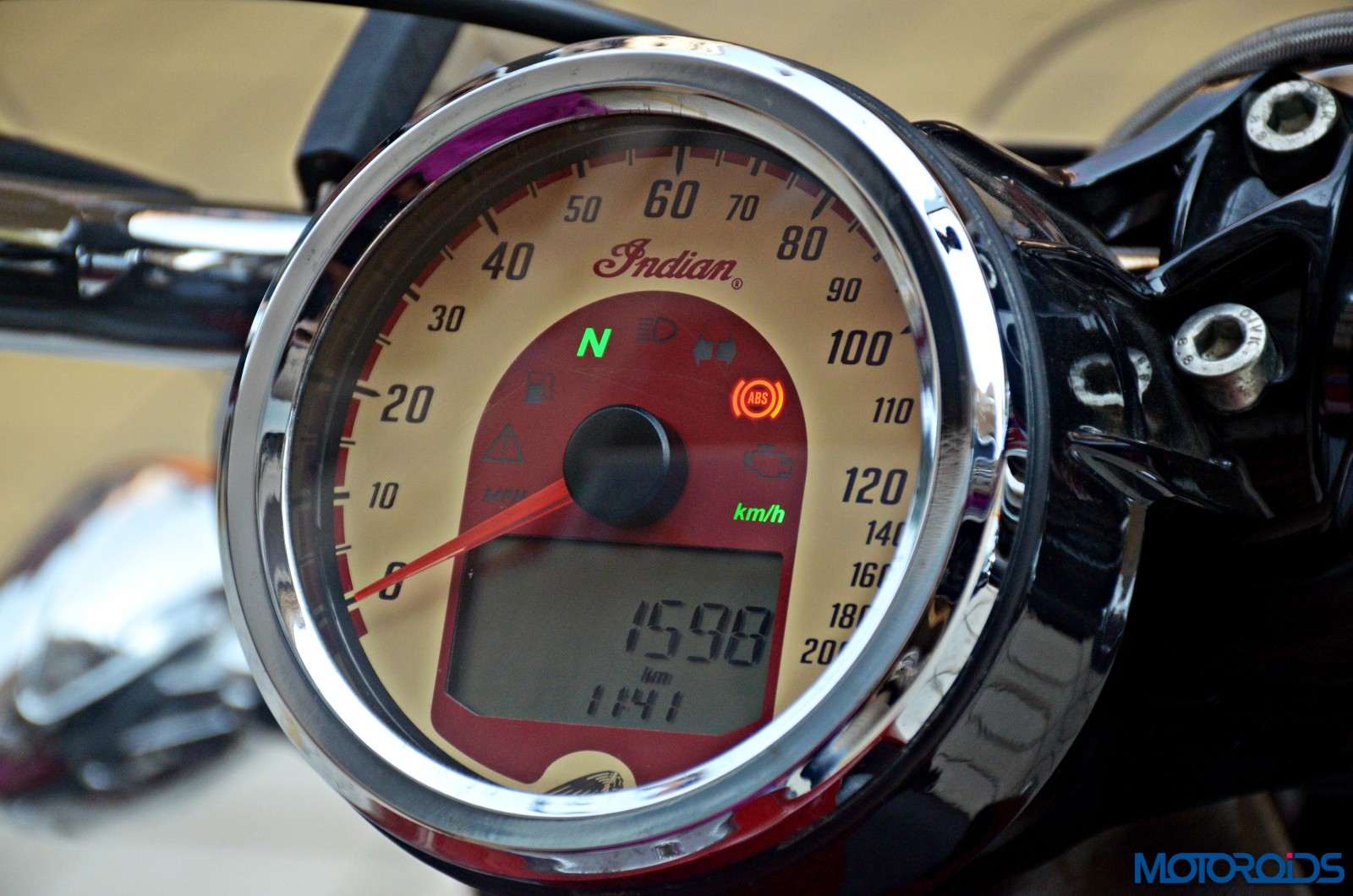 3. The Scout is the most budget-friendly Indian Motorcycle available today. But that does not necessarily mean that they have compromised on the build quality. Every element has been designed to perfection and it’s really difficult (almost impossible) to find a flaw in the design. The detailing, the paint quality, the tanned leather seats and the chrome finish is remarkable and praiseworthy. 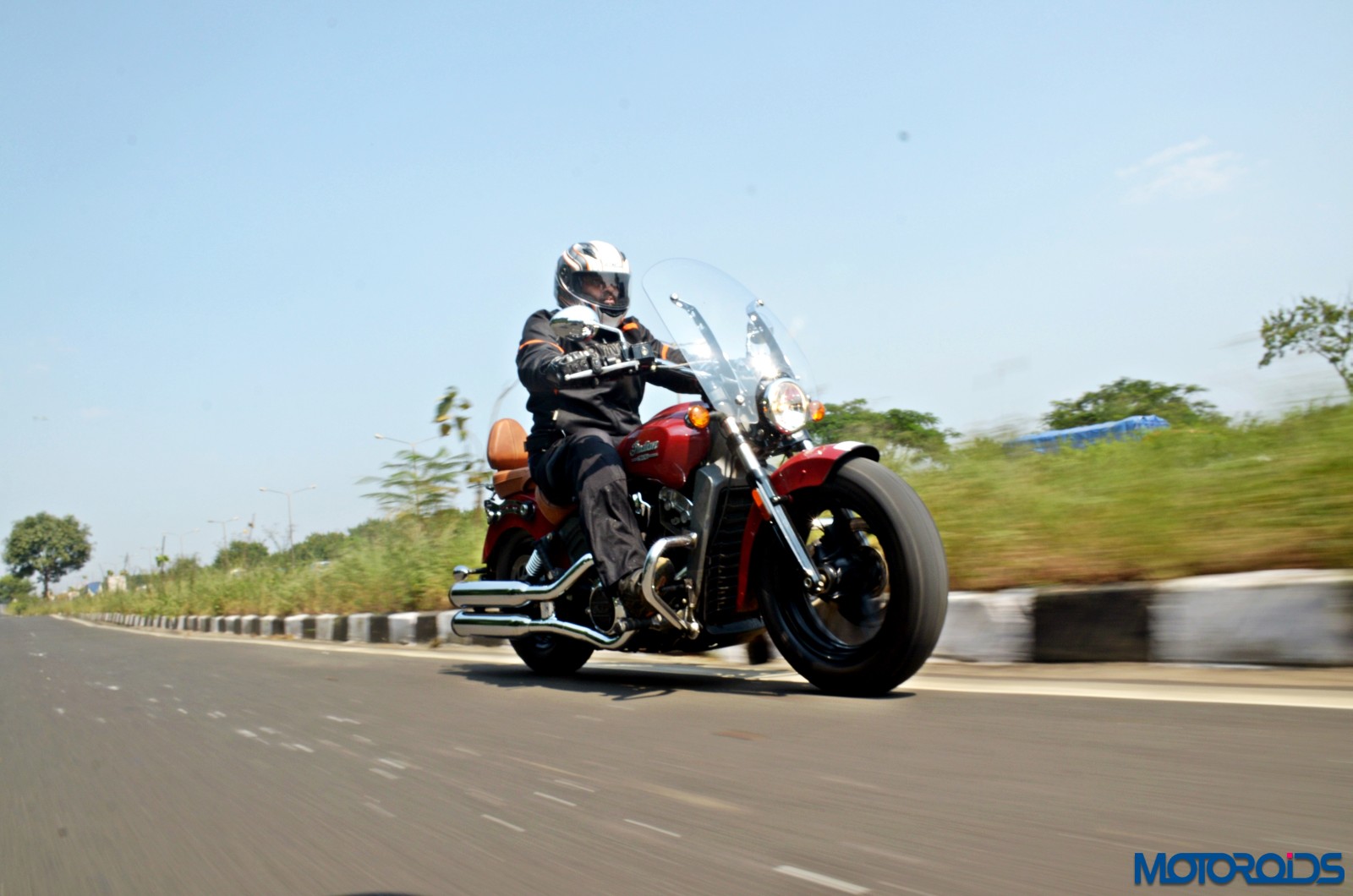 4. Then there is that engine. The 1130cc liquid cooled V-twin engine is a beauty, with a good amount of torque available everywhere north of 2,000 rpm, almost all the way to the redline rpm. So while you don’t ncessarily have to ride it like you stole it, you can if you so wished. The engine dishes out 100 hp of power @ 8,000 rpm and a peak torque of 97.7 Nm @ 5,900 rpm. The speedometer needle climbs north at the blink of an eye and its plain ridiculous, the ease with which the motor pulls the 254 kg of weight. Naught to ton comes well within five seconds, almost effortlessly and it continues to go faster, without much fuss. For a big American cruiser, this machine feels uncannily fast, intent and very, very sprightly. 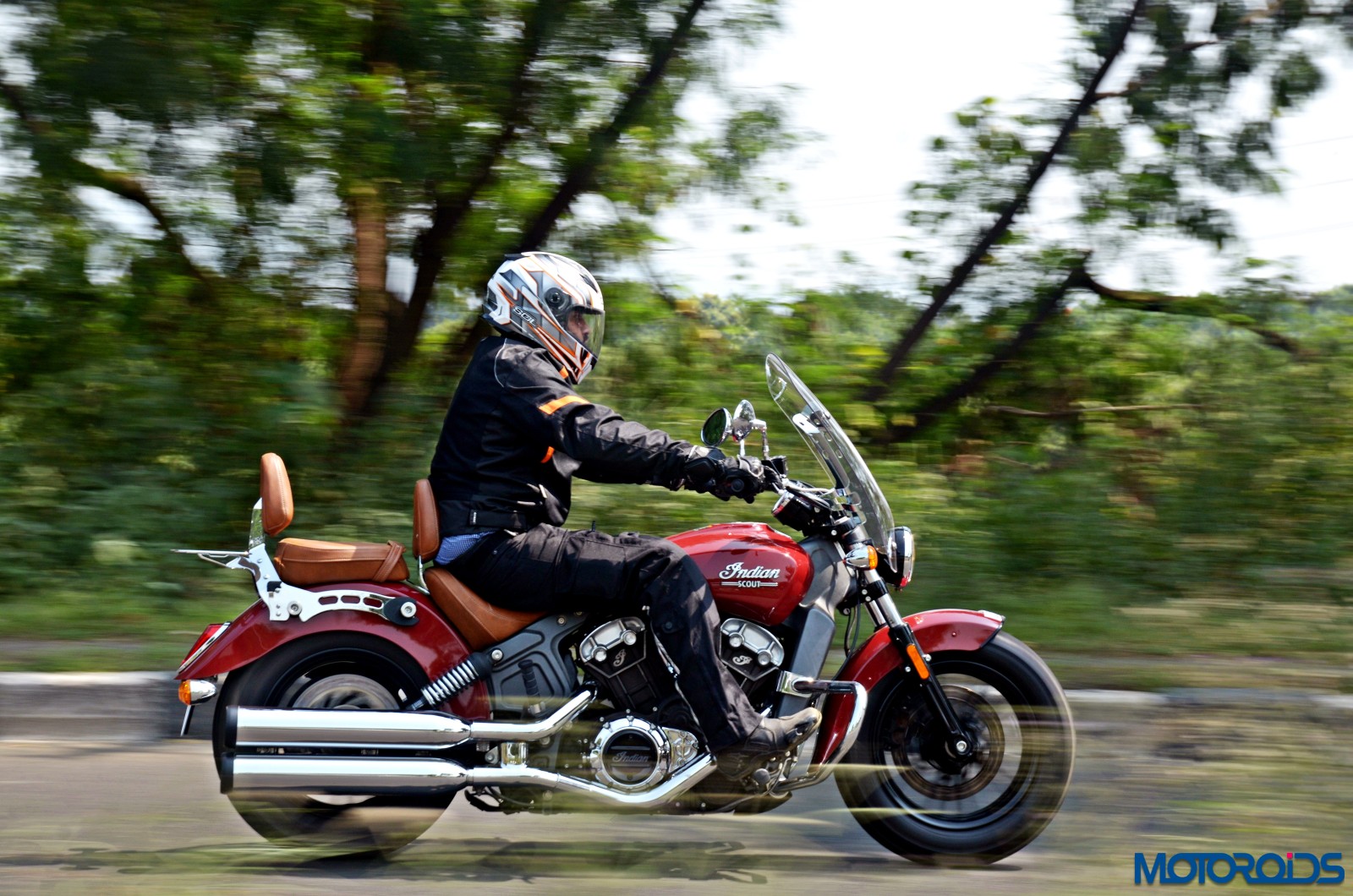 5. We were surprised to see a single disc upfront on a heavy motorcycle that packs in so much power and is willing to go fast. But the performance was quite satisfactory. It isn’t the sharpest unit out there and we would have loved some more feedback and bite from that single disc 298 mm Rotor with two Piston Caliper upfront. The single disc 298 mm Rotor with single Piston Caliper rear is pretty decent too but nothing astounding. Further aiding those panicky stops in a reassuring manner is the ABS. 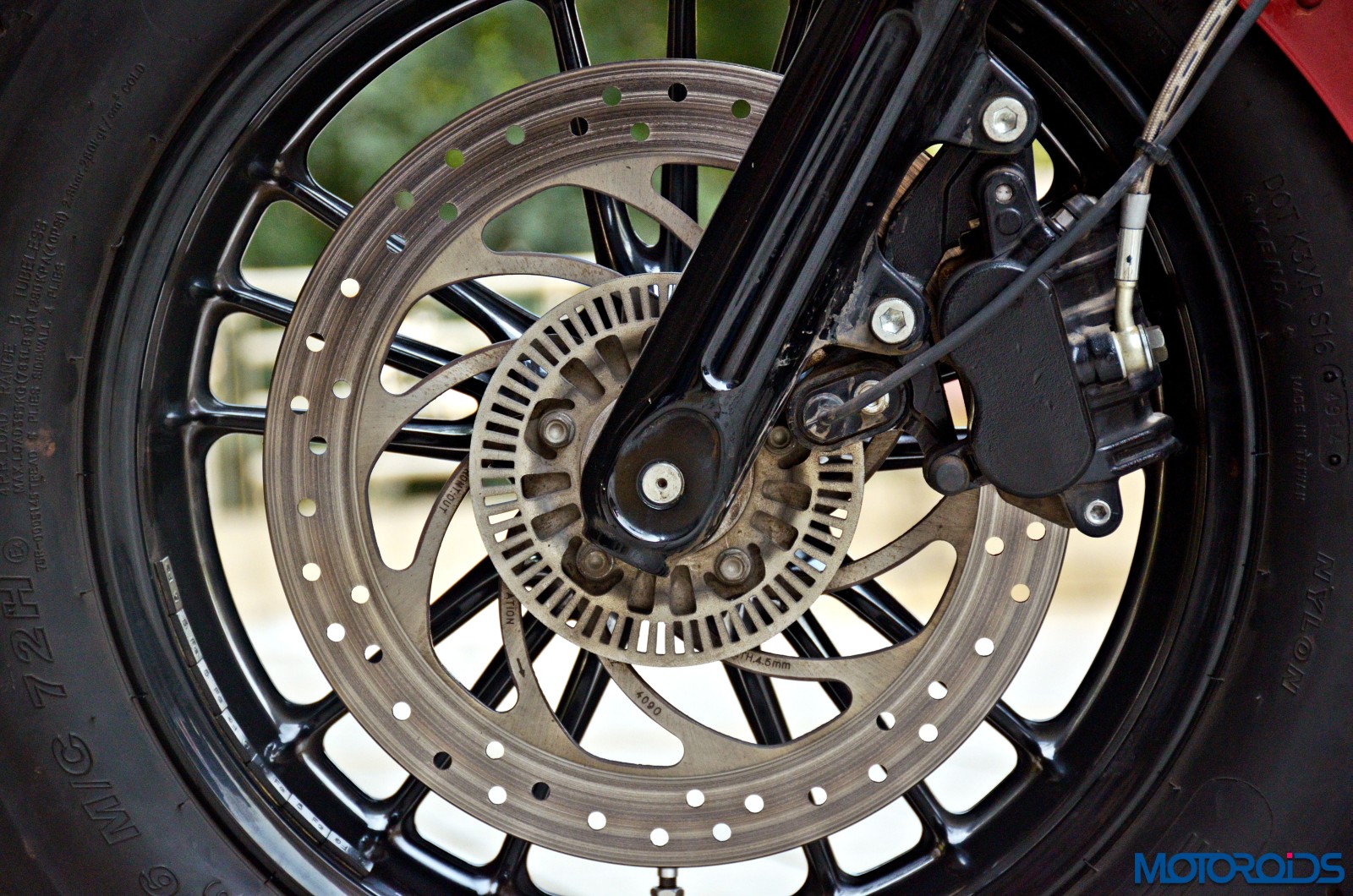 6. The conventional telescopic fork upfront and the dual shock at the rear, contrary to other Indian Motorcycles, are set on the firm side. While the setup comes real handy around the corners (yes, despite that 1562mm wheelbase) it does become a bit of a pain around the city, especially where the tarmac isn’t well laid. But that’s one sacrifice we are willing to make. Oh, and we managed to cross all the speed bumps without scraping the underbody. 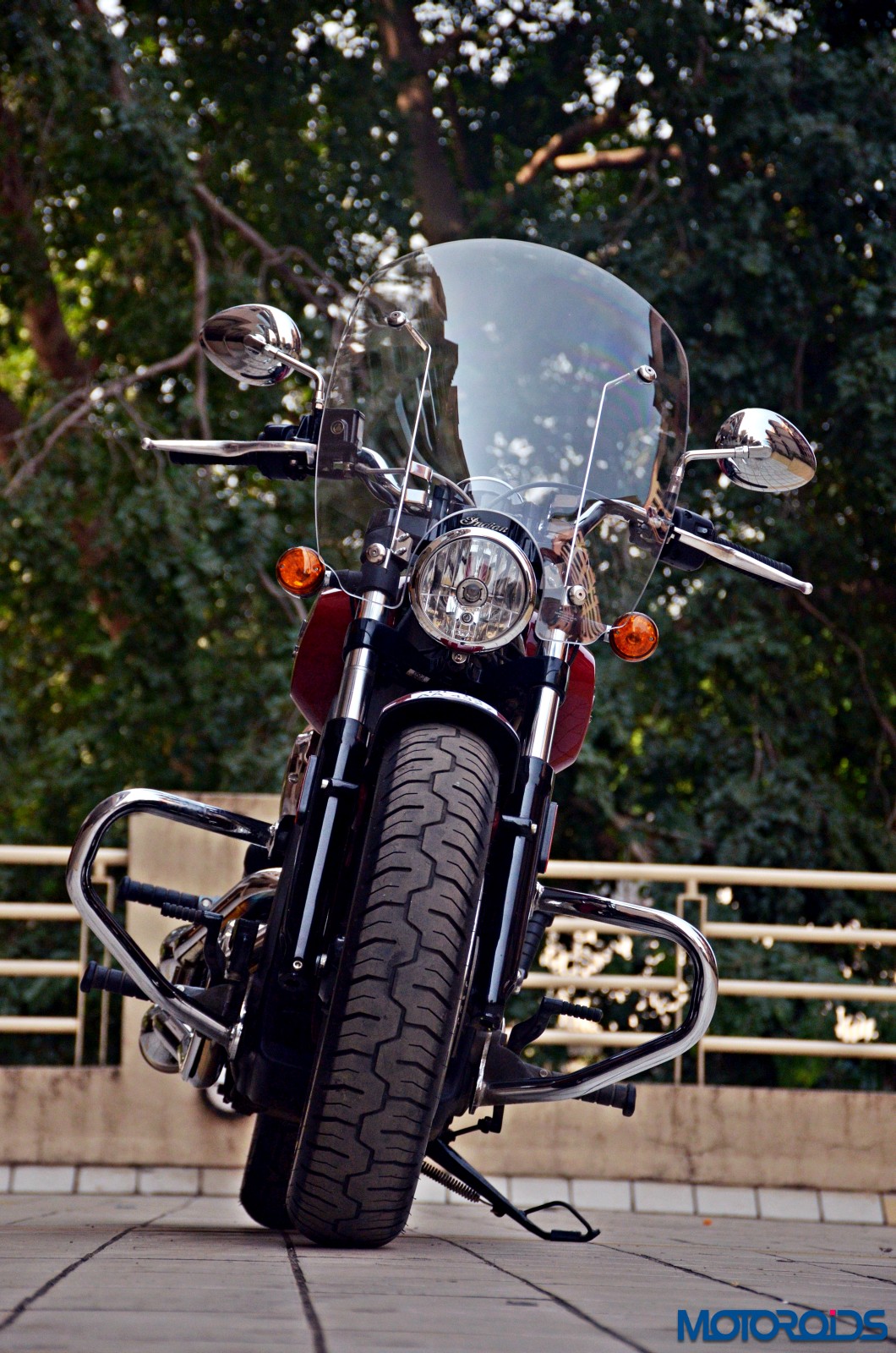 7. Although the Indian Scout isn’t anything like we have ridden from the Indian Motorcycles’ stable, the ergonomics are distinctively cruiser like with an upright seating position. The seat is well cushioned while the optional backrest further aids comfort. The test motorcycle was also equipped with optional windscreen. There are two more windscreens in the options list which are taller than the one we had. 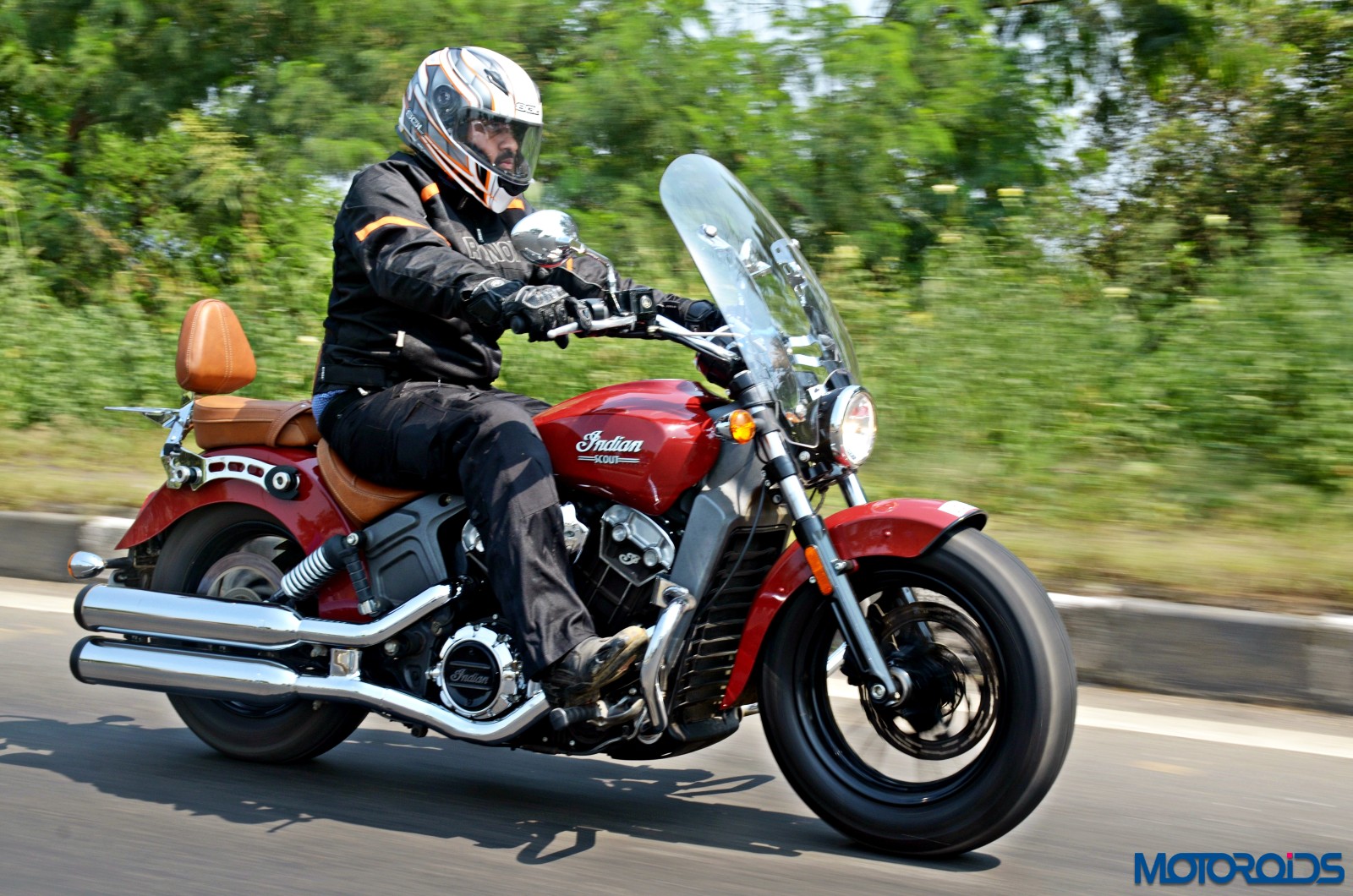 8. Here is the best part. The Indian Scout costs INR 11.99 lakh (ex-showroom Delhi) which is a good price. Not only is the Scout a stunner of a motorcycle, it also is a product from the oldest American bike maker which boasts a rich legacy. The performance, finish and presence of the Scout is incomparable to other similar products from American stables. 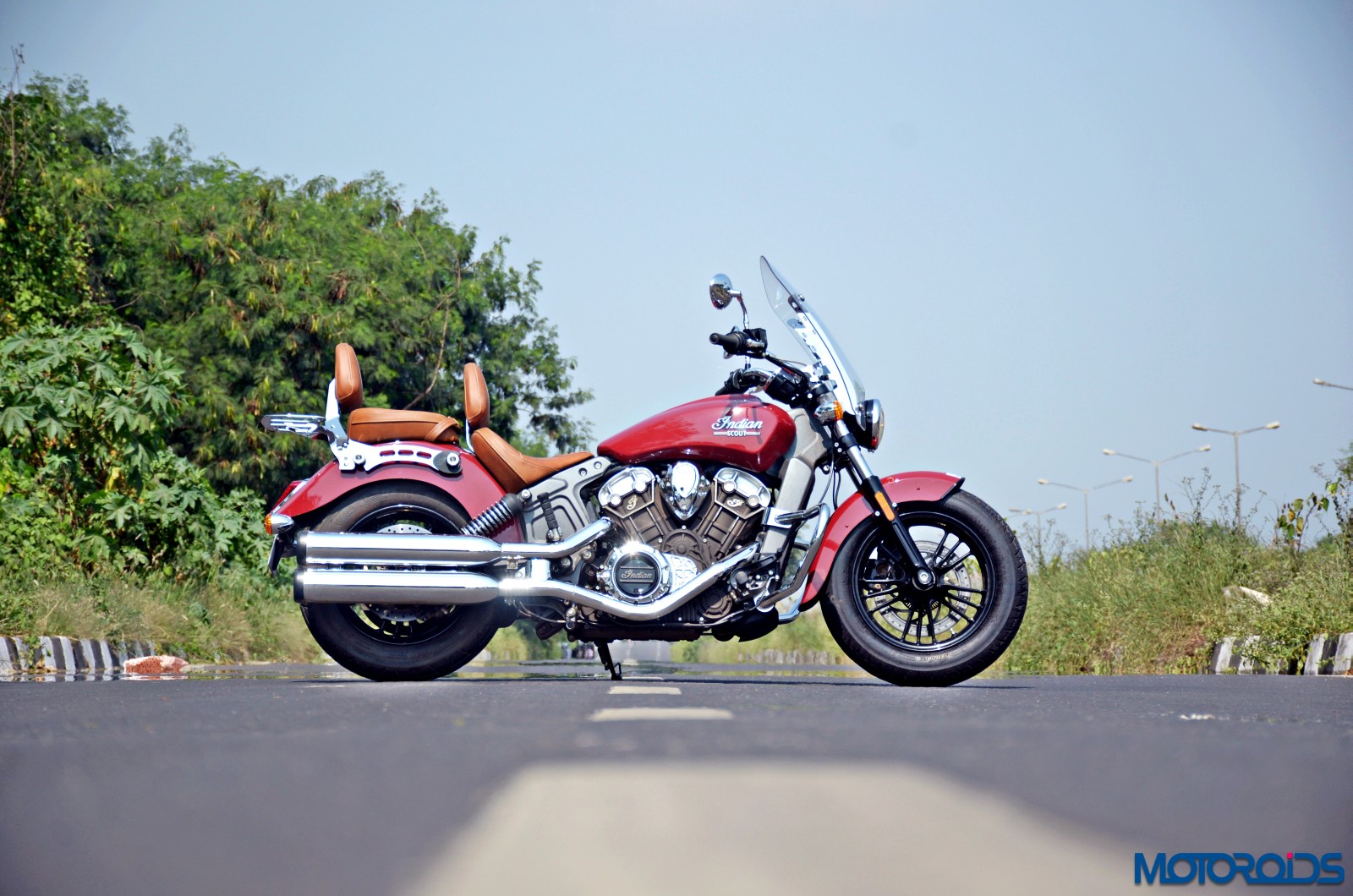 What can be improved?

1. The fuel tank could’ve done with some more capacity as the 12.5 litre volume feels slightly lacking for an engine that is meant to rev throughout the day. Also, a fuel gauge could’ve been integrated into the digital console. It would definitely come handy, especially during those long rides – unless you are a mathematical genius who can mentally calculate the distance your motorcycle can cover. 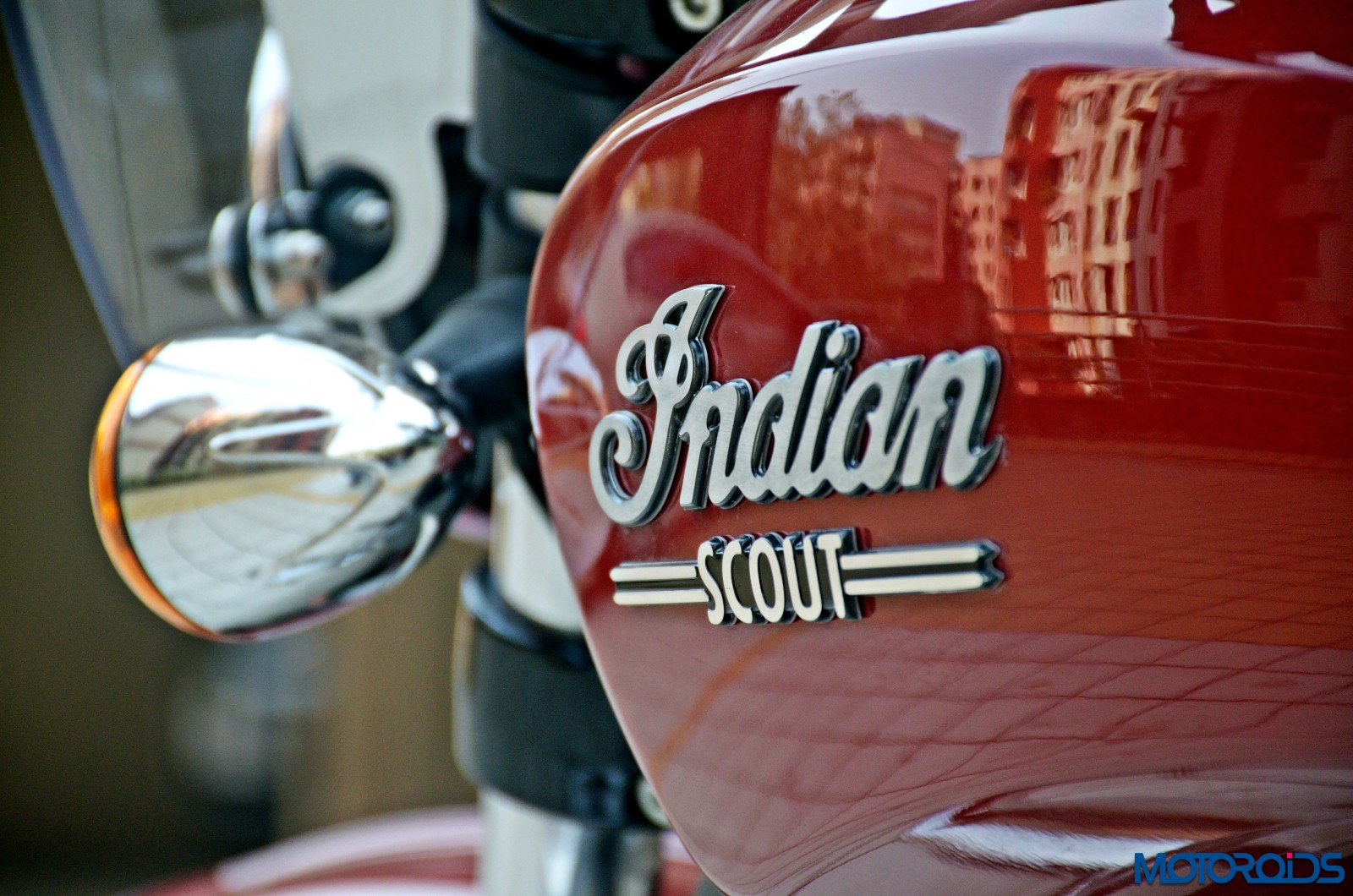 2. The brakes could’ve done with some more bite. A dual disc setup at the front would’ve helped the case. 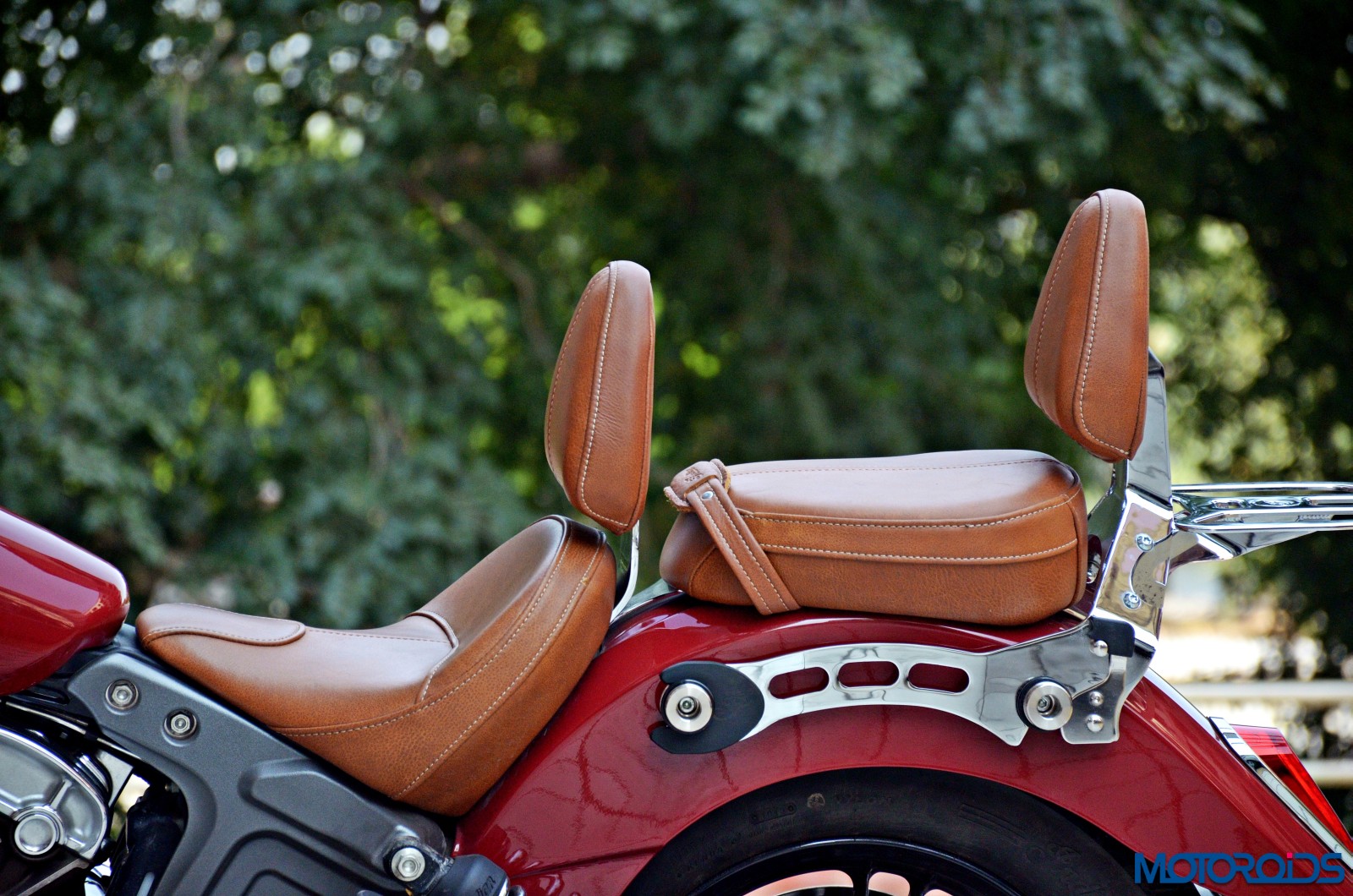 3. What’s really bothersome is the heat from that V-Twin. It does get a little more than warm – to put it mildly – and you wouldn’t want to be stuck in a traffic jam on this motorcycle. Moreover, the seat’s design is narrow towards the front and a good part of frame is exposed (check out the image above) which constantly comes in contact with your legs… and it heats up. You can do the math here. 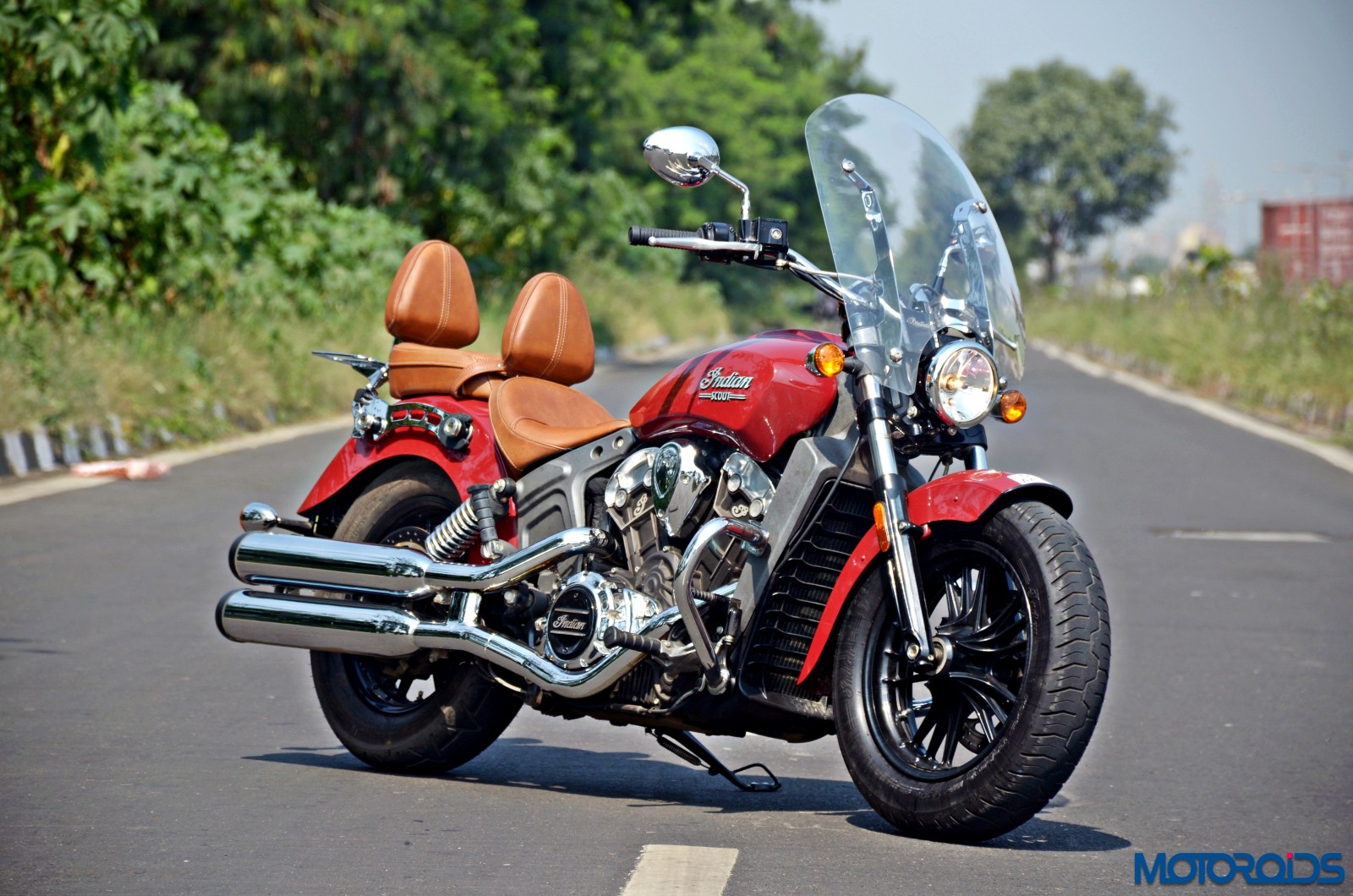 The Indian Scout induced nostalgia of the Chief Vintage and the Chieftain that I rode almost two years ago. But it was more than just a laid back ride. This Indian likes to go fast, it handles well and is lightweight (well, relatively) – a perfect package for someone who appreciates a good blend of classic styling and performance. Well, there are a few drawbacks such as the heating issue and the lack of bite in brakes but if you can live with that, you probably should write a cheque and get yourself this ride right away. 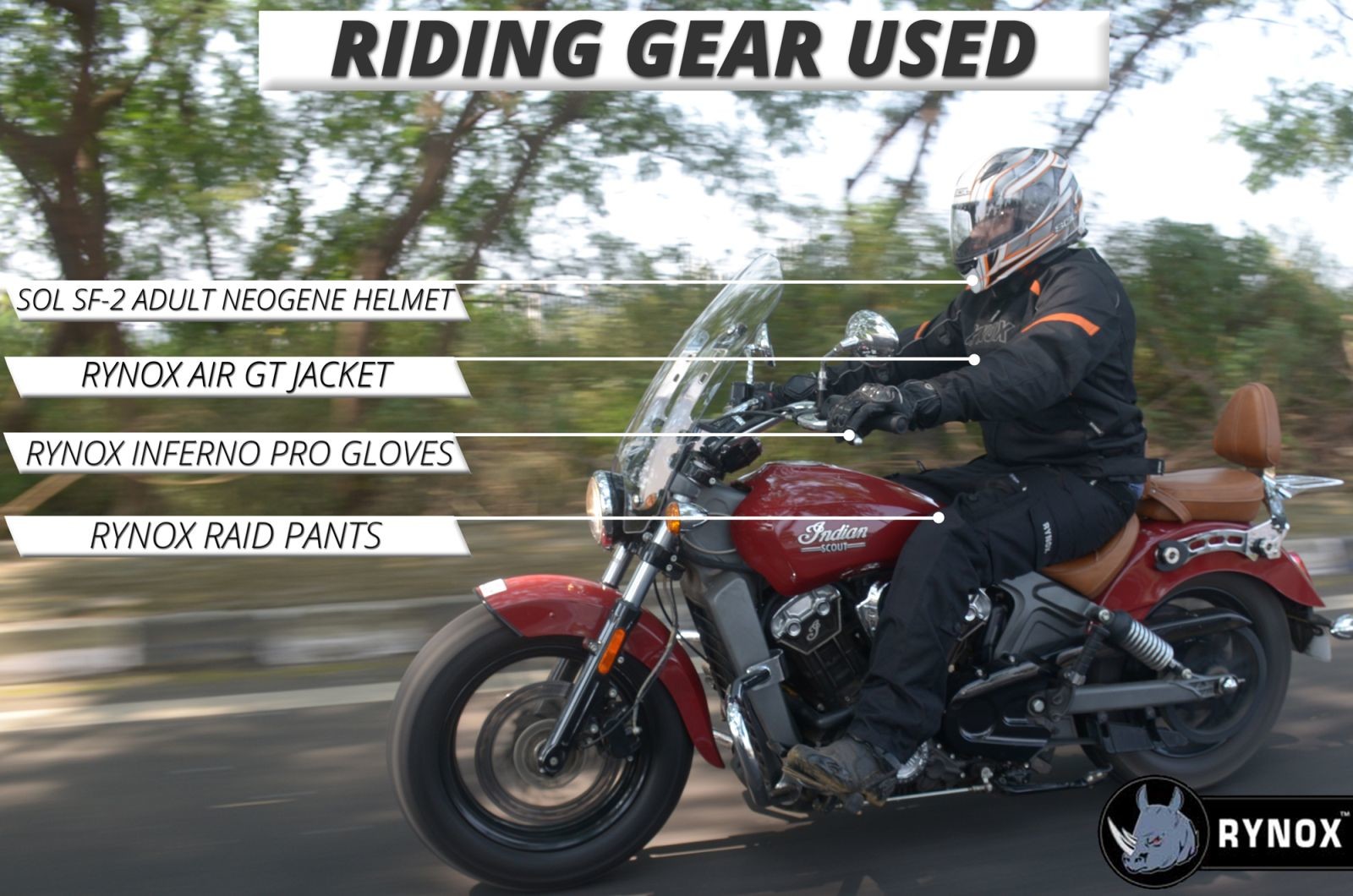 Check out the complete specifications below which would be followed by a detailed image gallery: