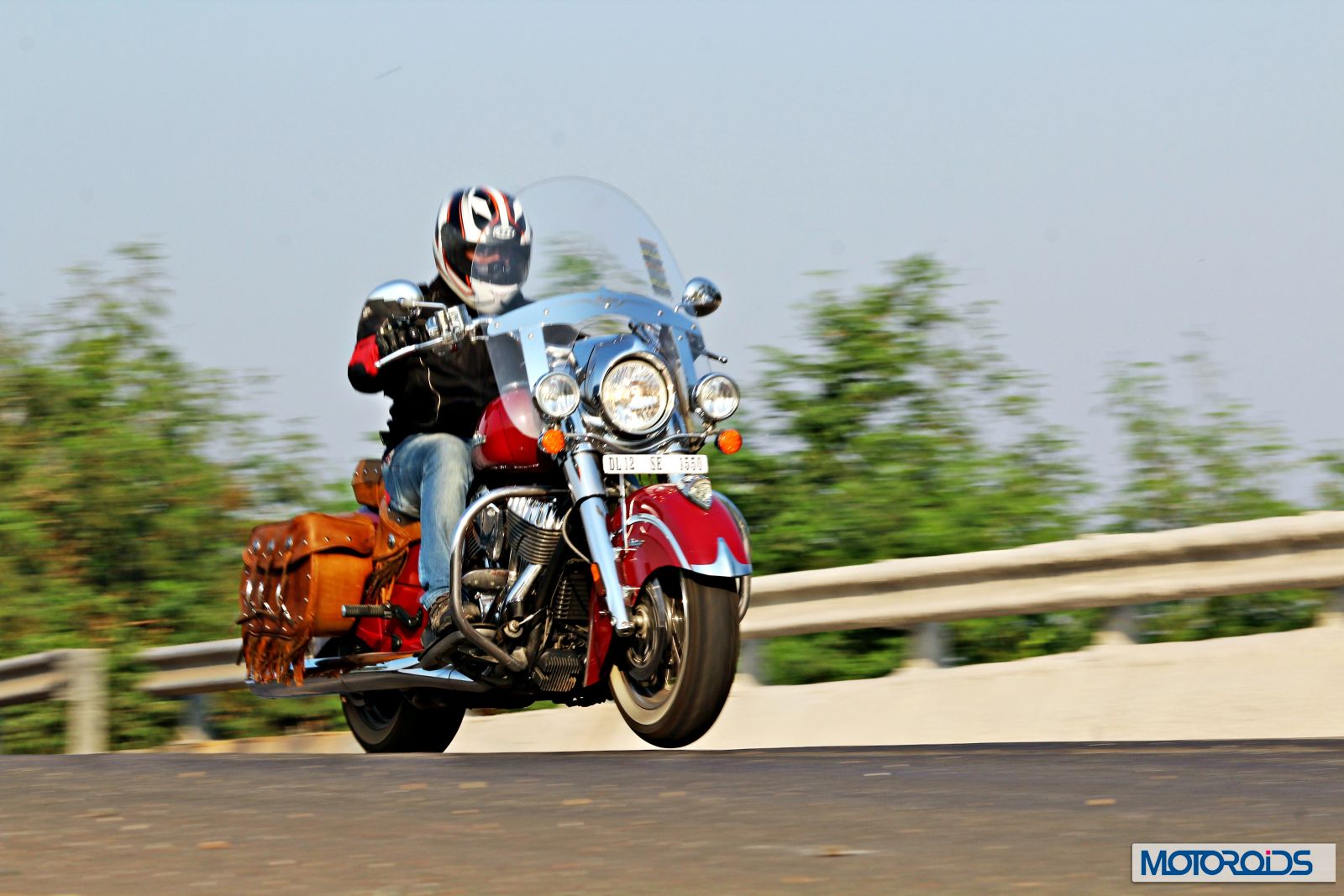 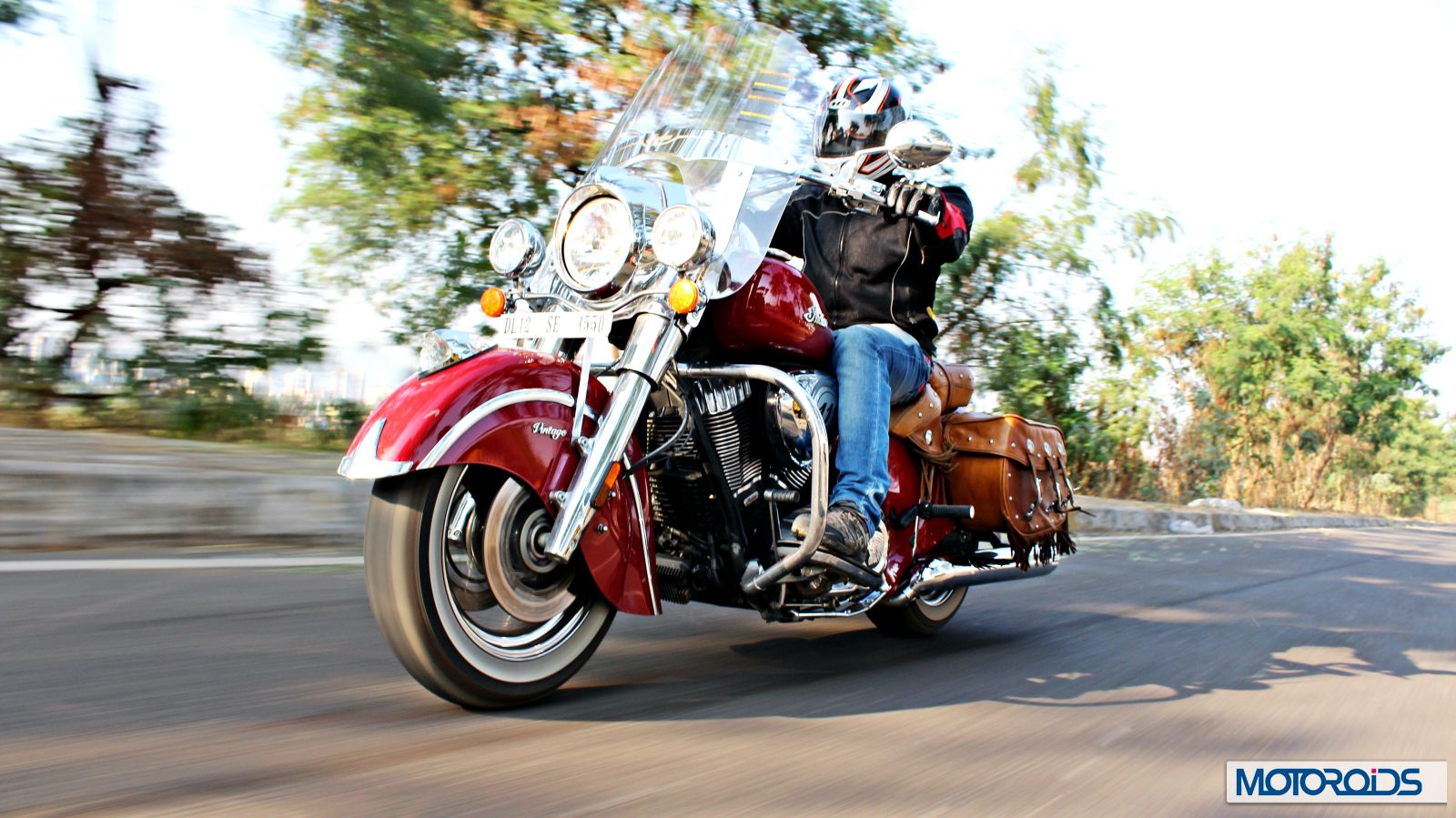 Before we start boasting about our glorious day with the Indian Chief Vintage, let us first delve into the history of this iconic motorcycle brand. Founded by George Hendee and Carl Oscar Hedström in 1901, Indian Motorcycles is the oldest American brand in existence. Just two years into establishment, Indian’s co-founder and chief engineer Oscar Hedström set the world motorcycle speed record of 56 mph. Another major milestone was achieved in 1911 when Indian riders Oliver Cyril Godfrey, Franklin and Moorehouse got first, second and third position in the Isle of Man competition. 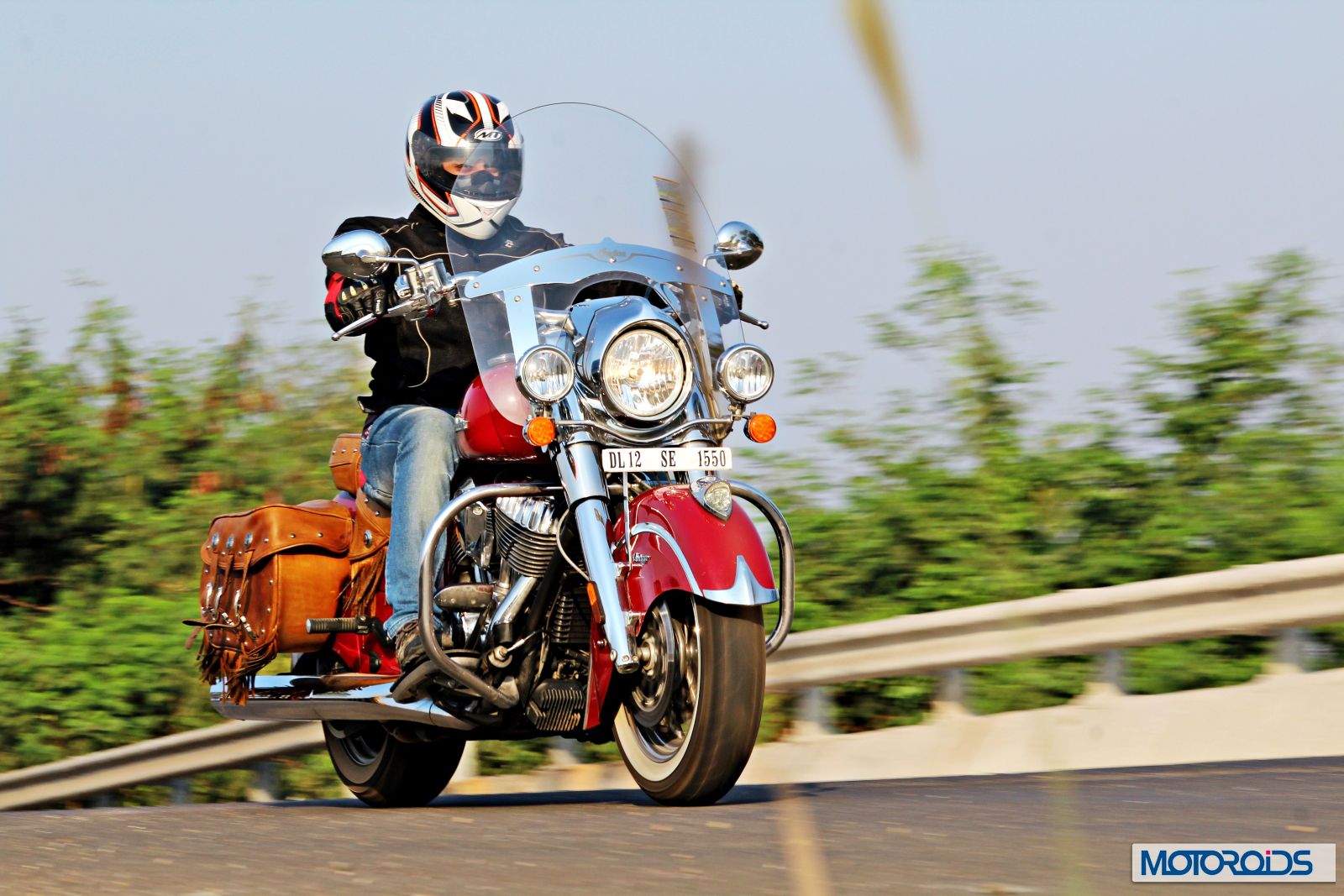 But the fall of the company, in true sense, began during the First World War when Indian Motorcycles dried out its dealership network to meet up with the demand from the US government in 1917 and 1918. The company lost its ace position to Harley-Davidson in 1920. And while the Scouts, Chiefs and Fours created good demand, the company severely suffered through the Second World War and was finally liquidated in 1953. 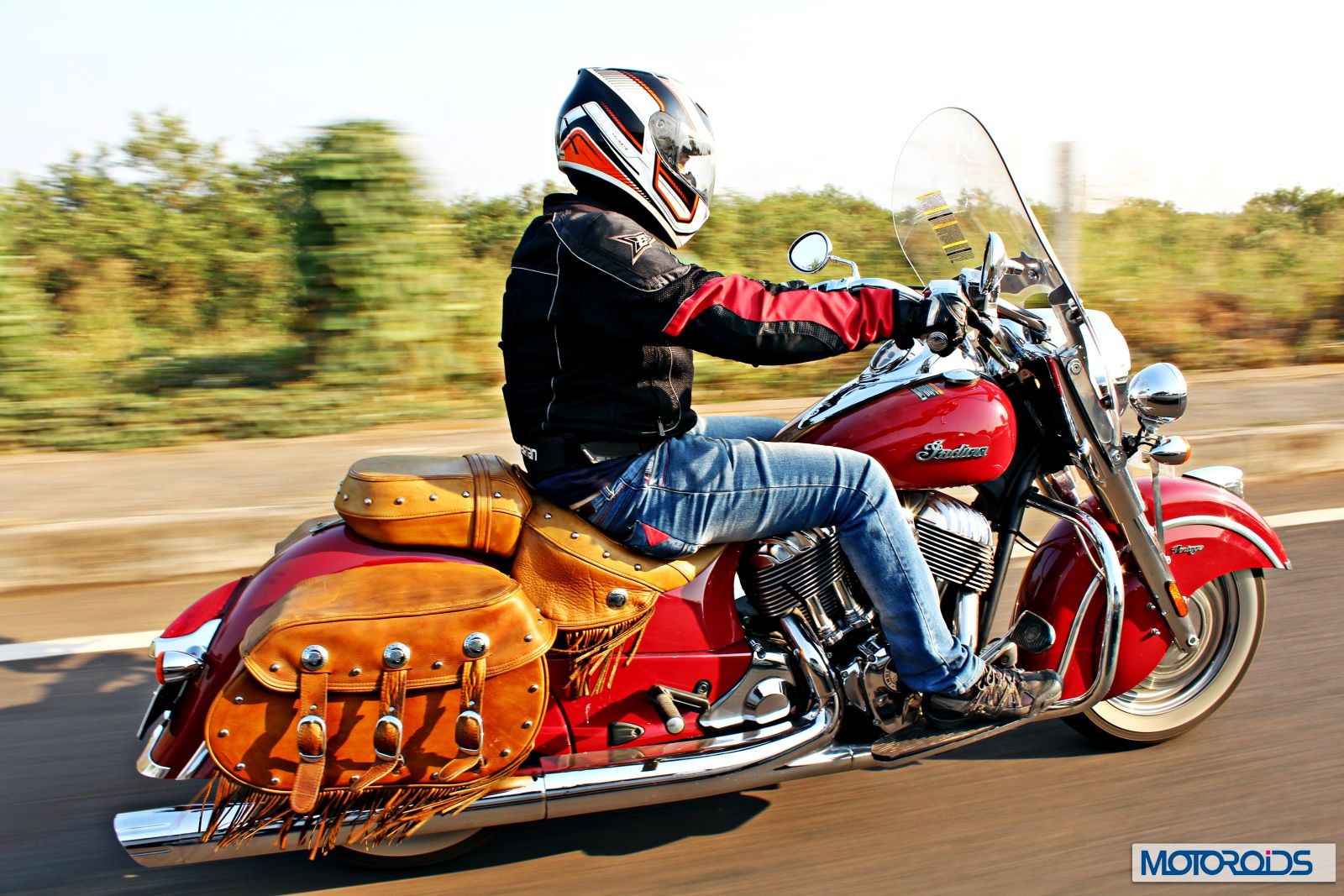 Various attempts to revive the brand went in vain. The most recent buyer of the Indian Motorcycles brand is American manufacturer of snowmobiles, ATVs, off-roaders and neighborhood electric vehicles, Polaris, which overtook the cruiser maker in 2011. Polaris loaded the Indian Chief motorcycles with a newly developed 111-cubic inch Thunder Stroke engine. The engine was developed from scratch and was created exclusively for the Indian Chief line-up. 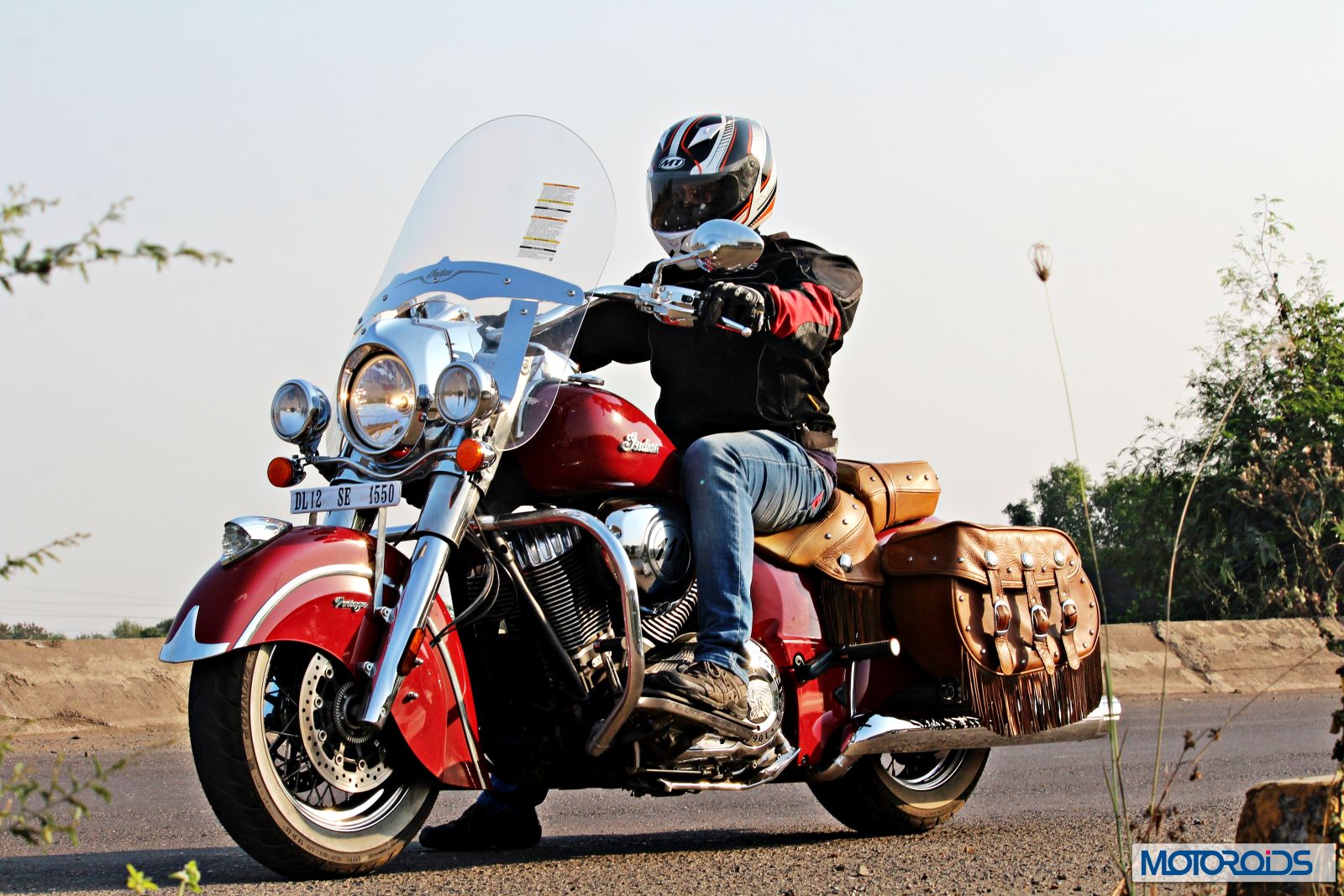 Whenever we introduce ourselves as automobile journalists, the most common response that we receive from people is that we get to ride all the new cars and motorcycles. Well, our job is not as fancy as it may sound. At times we are centre of attraction for humorous reasons as we ride puny scoots wearing all the riding gear. But the next day we are the demigods travelling on the most exotic machines mortal humans have even seen. Luckily, we are doing the latter today. 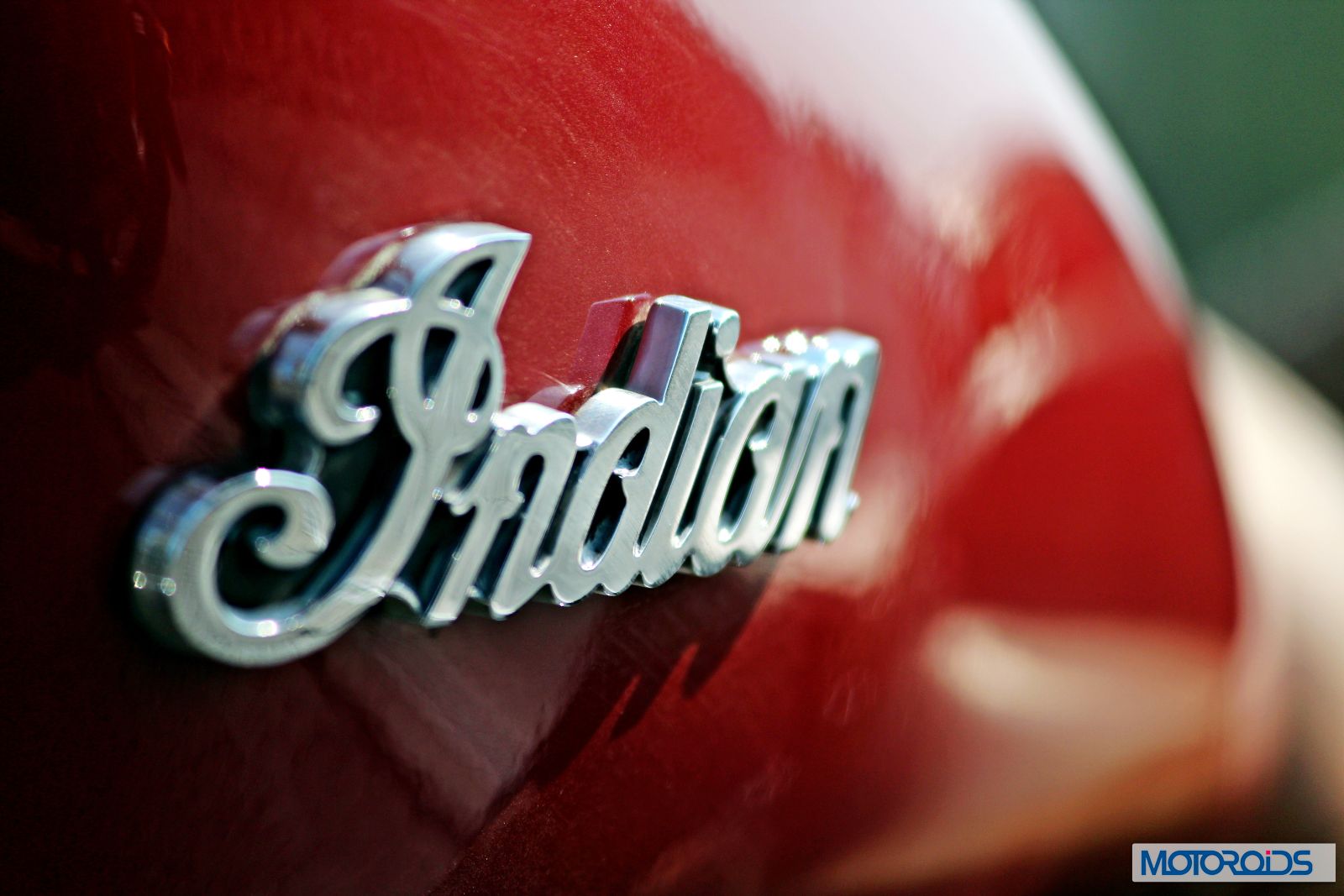 When I laid my hands on the Indian Chief, from a manufacturer with great history and stature, sweaty palms and weak knees grew upon me, as I almost stumbled in excitement. The current Indian Chief line-up comprises of three models, the Classic, the Vintage and the Chieftain, all of which are powered by the new Thunder Stroke 111 engine and differ only by a handful of features. This time though, we have the Chief Vintage in our hands for a real life test on the Indian roads. So without any further ado, let us get the key fob into our pockets and push the ignition switch to understand what this classic American product is all about. 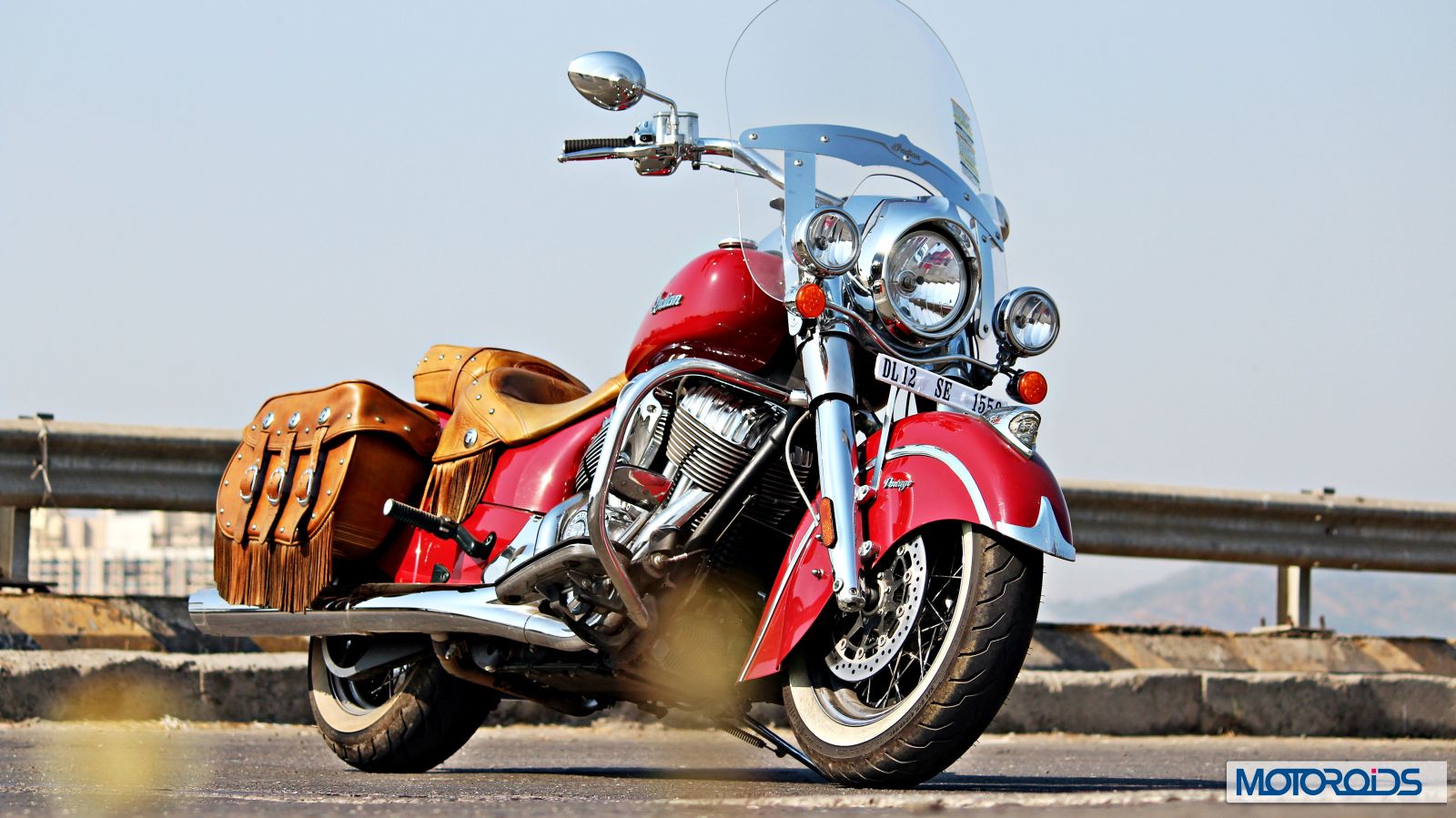 The Indian Chief Vintage is an eye-candy like a rare few machines. So much, so, that we were eventually annoyed by a wave of people flooding in to check out the motorcycle. The fast paced city life came to a halt as people slowed down on the Eastern Express highway to get a glimpse of the motorcycle. We literally had to ride off just to get rid of the excessive attention and resume the job at hand. 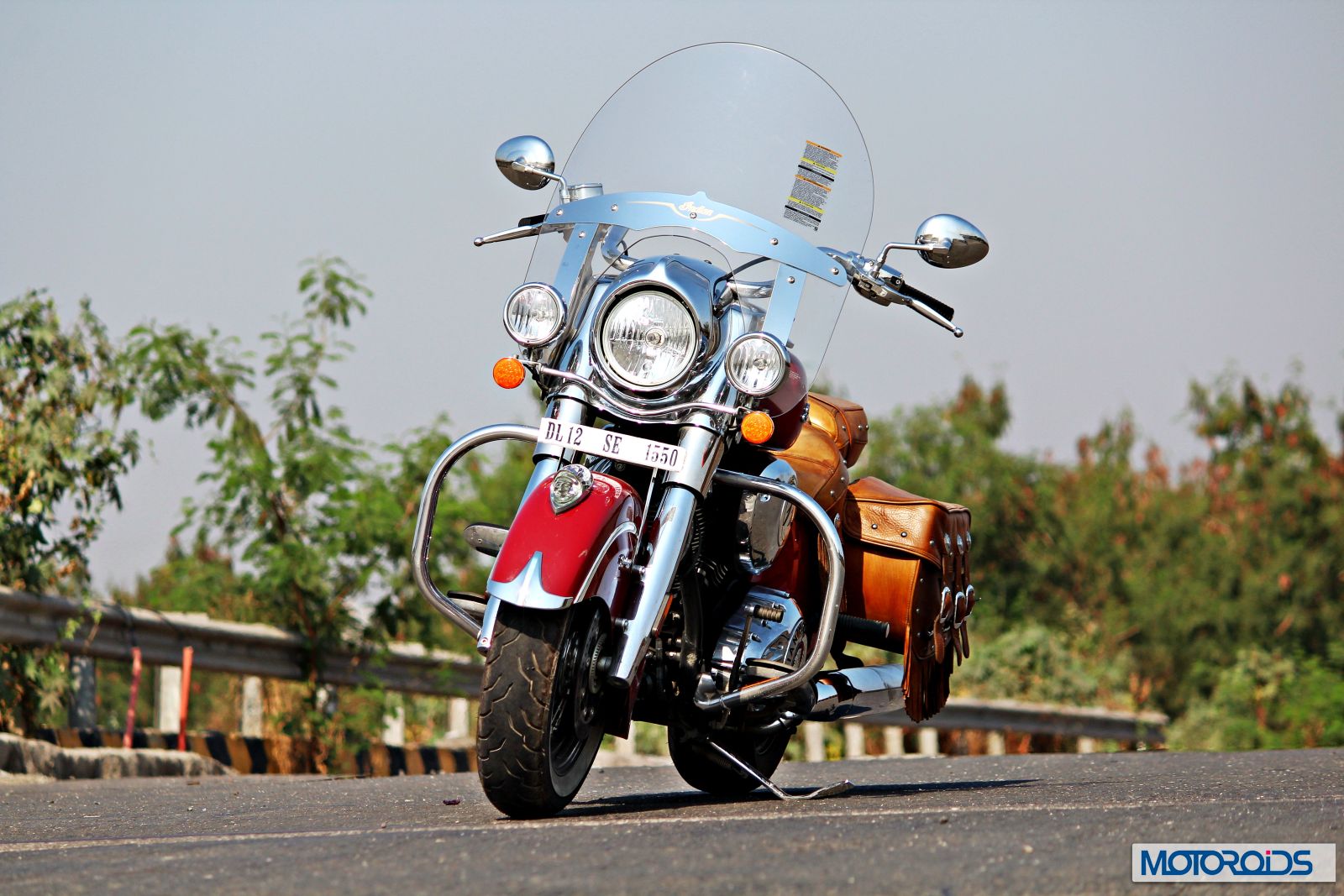 In the times of supersports and naked roadster motorcycles, the Indian Chief Vintage stands out of the crowd like an old school rockstar in his hippy attire. The Chief Vintage borrows its dressing cues from the Indian motorcycles of the (g)olden days. Even the colour! You can get the Chief Vintage in the same solid Indian Motorcycle red colour that it was sold in during the yesteryears. You can also opt for Thunder Black, Willow Green/Ivory Cream, Indian Red/Ivory Cream, Indian Red/Thunder Black colour shades. However, do not expect a clear coat paint job. Indian has kept the motorcycle as close to its history as possible. 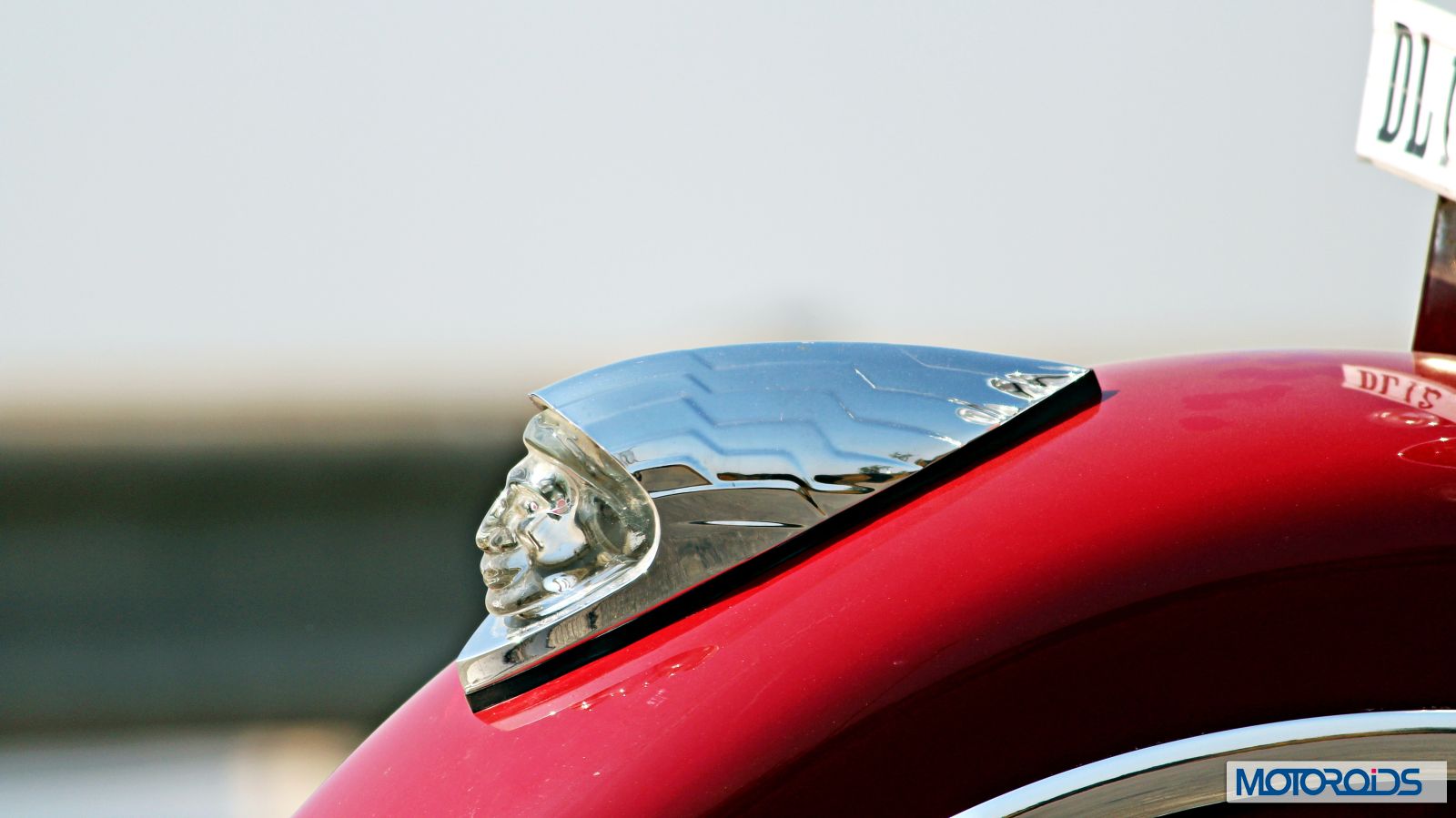 War Bonnet, the classic Indian emblem, housed in a chrome frame, graces the enormous front fender of the motorcycle. This iconic valenced fender on the Chief Vintage has been standard on Indian Motorcycles since 1940’s. A chrome trim ravishes the front end of the fender while a strip follows the arch on both the sides. The 3D Vintage brand logo can be spotted below the chrome strip on either sides of the fender. 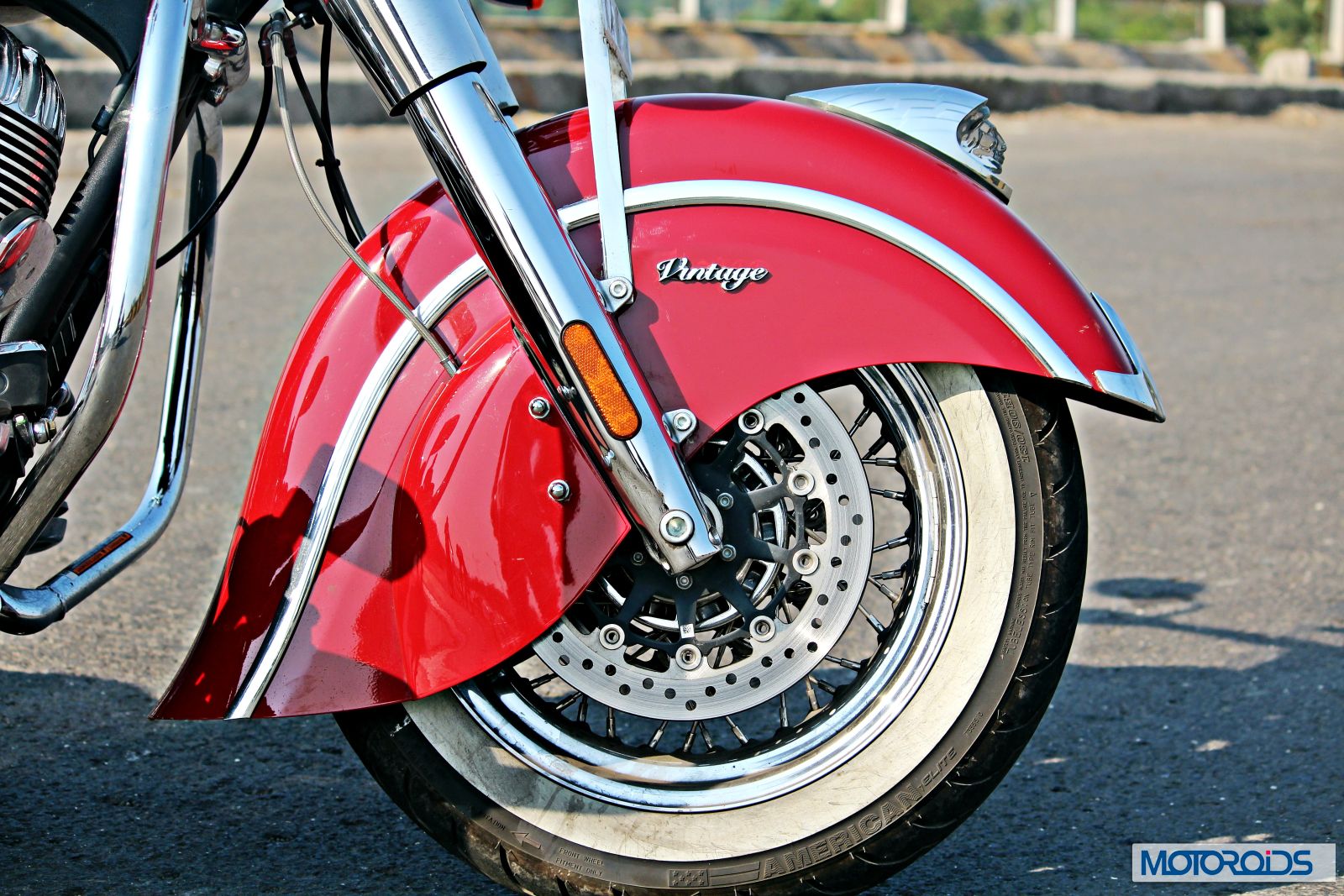 The beefy, chrome laden, front telescopic fork with dual rate springs holds the three-pod headlight assembly which further merges into the quick release Lexan windshield receptacle. And while the centre headlight is always ON, a button behind the front assembly controls the sub-headlights. The entire assembly is followed by chrome smacked handlebar, rear-view mirrors, clutch and front brake lever and switchgear. 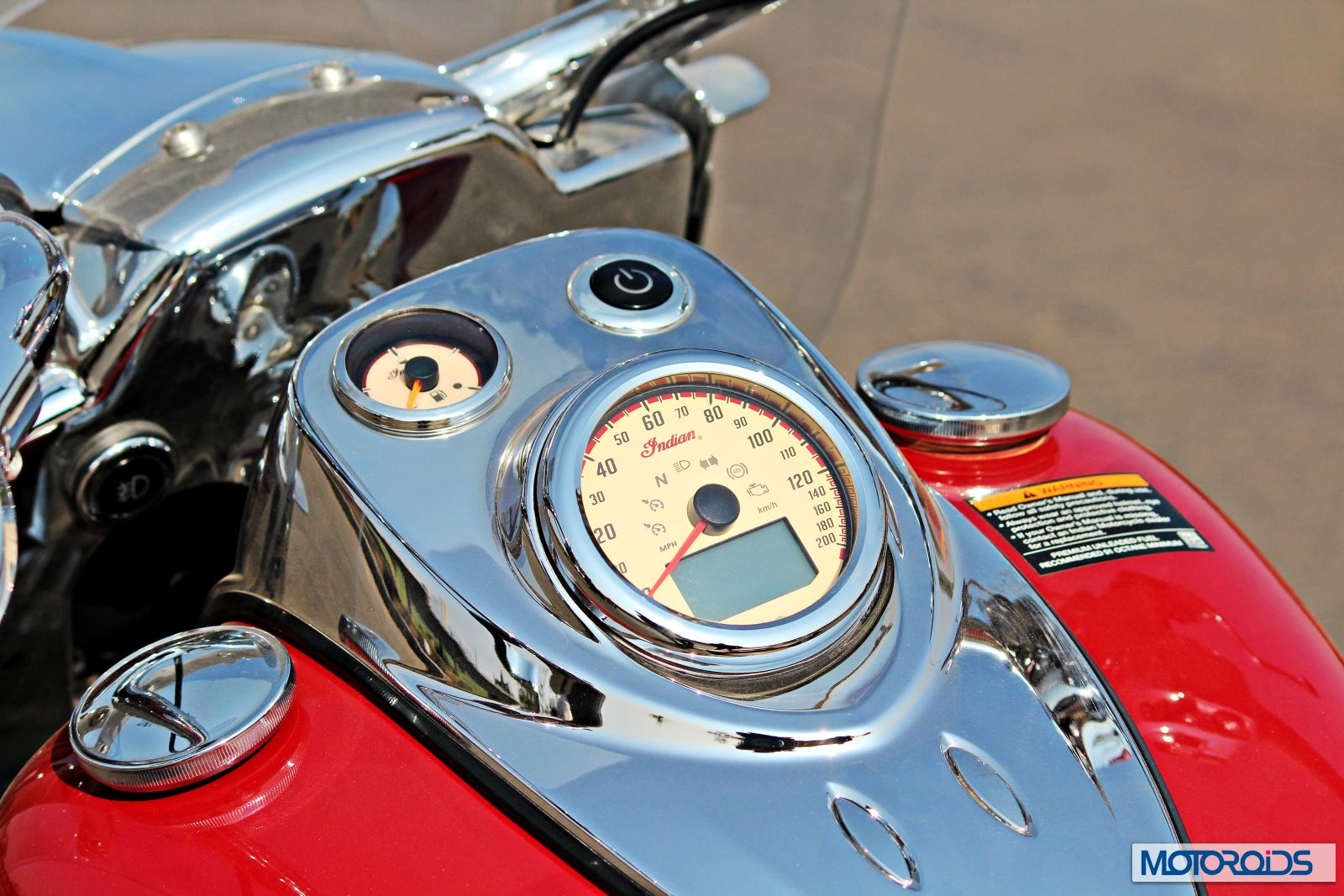 Following the design further, a fuel tank, with 20.8-litre capacity, is bestowed with the 3D Indian logo. Top of fuel tank, along with the filler lid, also holds the instrument panel that comprises of an analogue speedometer clubbed with a multi-function digital display. An analogue fuel gauge and a tank mounted Power button holds position above the speedometer. 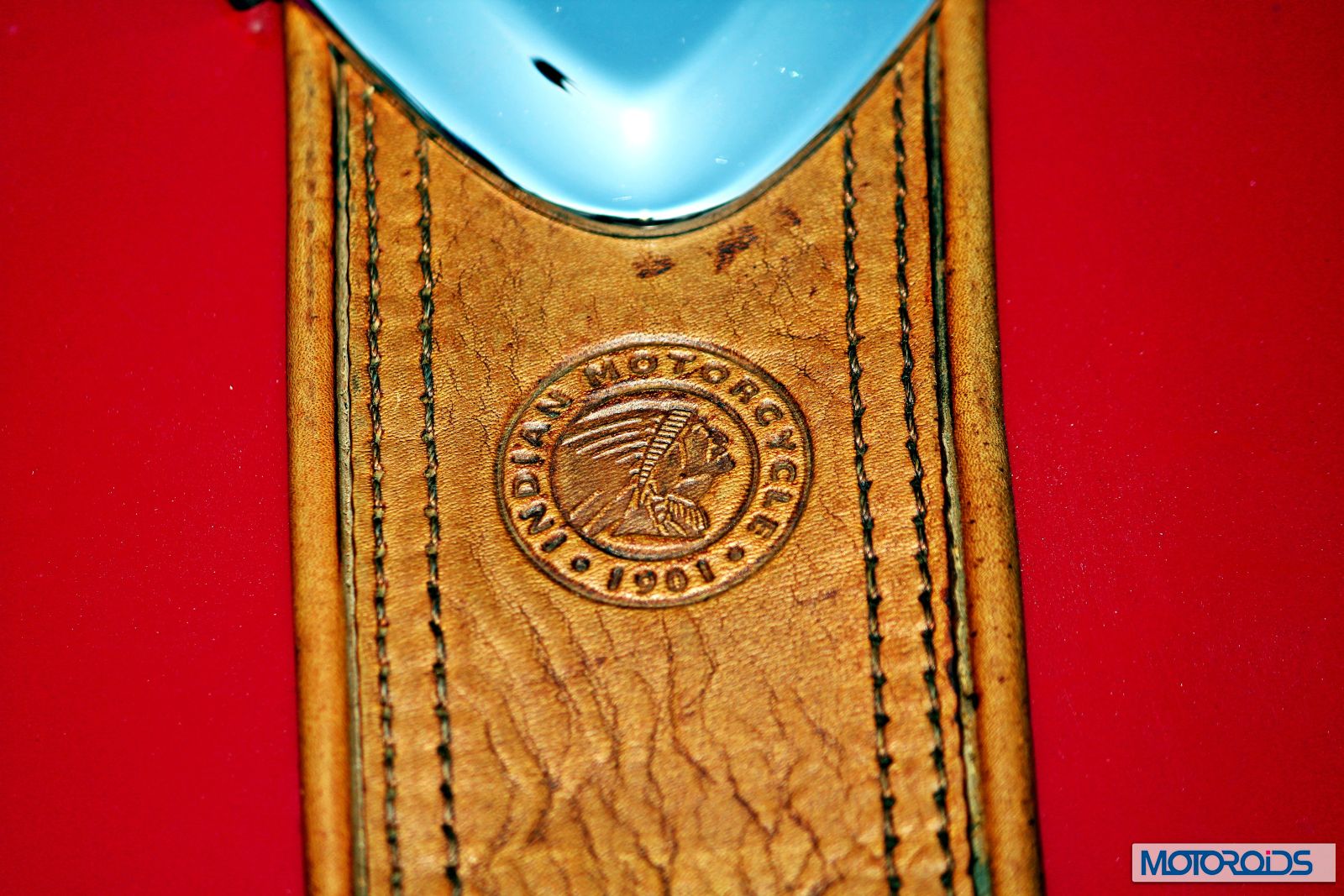 The instrument panel is followed by a leather strip that also works as a tank pad. The strip merges into the couch-like comfortable tangerine coloured split seats. A pair of saddle bags, with the tan leather, is installed on either side of the motorcycle. The bags receive a three-buckle strap system with well disguised plastic latches. The rivets on the seats and saddlebags act as icing on the cake giving the seating setup a more authentic and retro look. The mid and the rear end of the motorcycle is shrouded with metal, exposing very little of what’s underneath it. An LED tail-light and turn indicators inhabit the tail section. A chrome trim, similar to the one found on the front fender, completes the overall design. 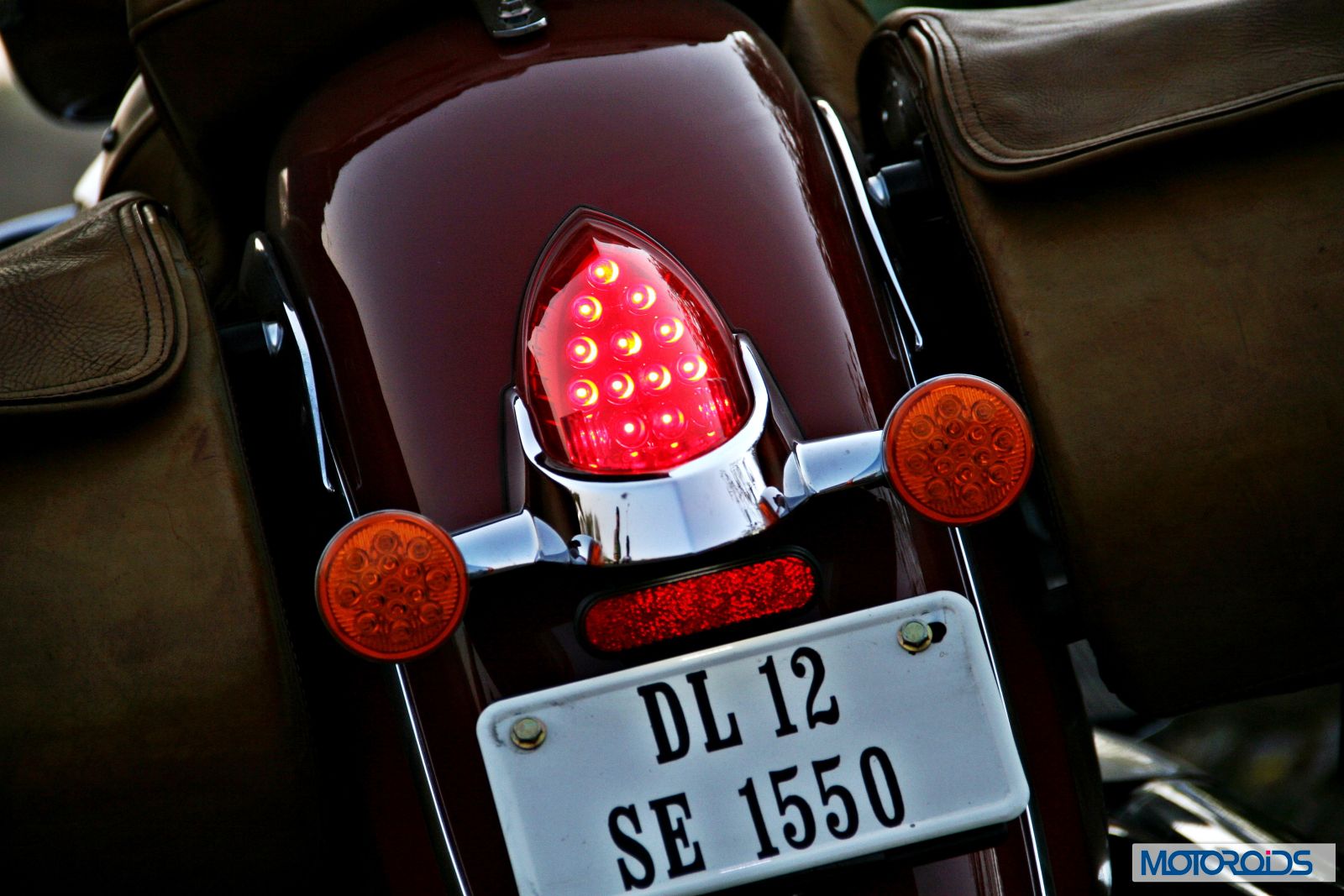 The Chief Vintage has Indian written all over it, literally! Excluding the regular spots like the fuel tank, the Indian badging can be seen on various parts of motorcycle including the handlebar grip, bar ends, foot board and the exhaust which gives a more personalised feel to the cruiser. The overall build quality too is sturdy and above par in most aspects.

Click here to know the Indian Chief Vintage in details>>>