As a part of the Safer Cars For Africa campaign, Global NCAP is conducting crash tests of the car models sold in the African market. As a part of this campaign, NCAP crash tested the Hyundai i20, which is also sold in the Indian market and even made here. The results may be promising but it seems that they could have been better. The lack of safety aids like ESC and curtain airbags, the Indian spec of the Hyundai scores a safety rating of three stars. The car received a 3-star adult occupant safety rating while the lack of ISOFIX child seat mounts meant that the child occupant safety rating dropped to two stars. 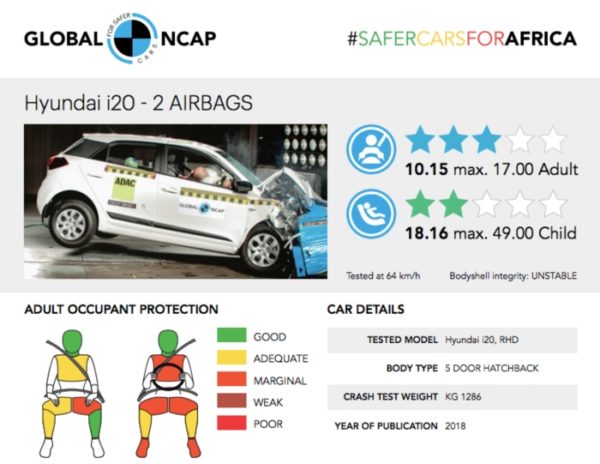 The study also found the vehicle structure and footwell area ‘unstable’ which is not a good thing to hear. The car although is equipped with seatbelt pre-tensioners in the front and the driver also gets a seatbelt reminder function. The child seats had to be fixed with the seatbelt which could not provide enough protection against the forward movement of the child seat. Giving the car a safety rating of just two-stars for the child occupants. The i20 is offered with safety equipment like dual airbags and ABS as standard. 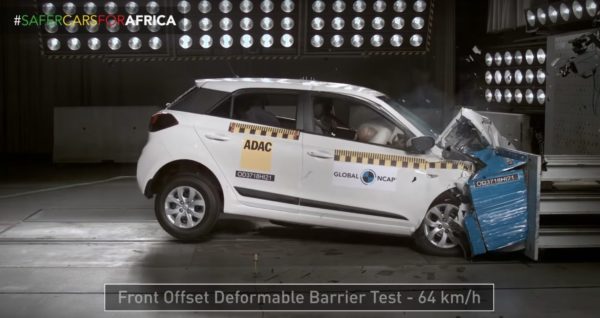 The i20 hatchback is offered in the Indian market in the price range of INR 6.03 Lakh to INR 10.49 Lakh. It is offered with a choice of two engine options, a petrol and a diesel. The petrol is a 1.2-litre unit making 82 bhp and 115 Nm of torque and the oil burner is a 1.4-litre unit generating 89 bhp and 220 Nm of torque. Both the engines send power to the front wheels. The petrol variant gets an option of either a 5-speed manual or a CVT automatic gearbox, the diesel is only offered with a six-speed manual. Below is a video of the crash test uploaded by Global NCAP.