Just a few weeks back, Maruti Suzuki had announced their new plan to test electric vehicles on the Indian roads. They put out a fleet of over 50 cars, to go through various driving conditions are roads have to offer. These cars are developed by the Suzuki Corporation in Japan and assembled here at the company’s plant in Gurgaon. A big thanks to our reader, Kym KH Kongor, for sending us these images. We see two of these electric vehicles roaming on the highway bearing HR registered temporary number plates. 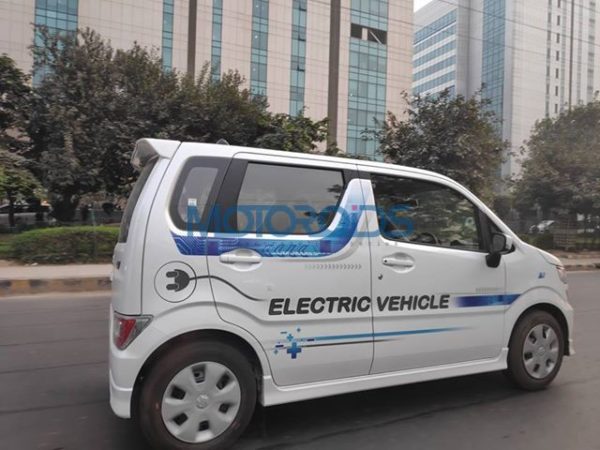 Maruti has a vision of launch EV’s in the Indian market by the year 2020, as a part of which this fleet testing of vehicles began. Based on the WagonR hatchback, these EVs have been roaming with no camouflage at all. Moreover, stickers on every side of the car indicate this is an all-electric vehicle. The design of the B-pillar on the vehicle too is rather interesting, a different design approach has been taken instead of the usual blacked out treatment. The rear gets rather tine tail-lamps, mounted on the lower end of the car. Also seen on the side is a normal fuel cap which would probably hold the power port of the car. 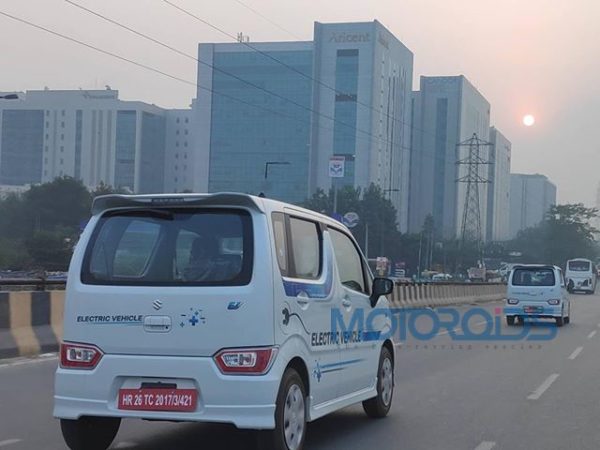 The cars as mentioned above would undergo intensive testing on Indian soil to see if they can withstand the Indian conditions. Once satisfied with the results, Maruti plans to offer all-electric vehicles in the Indian market as soon as 2020. This could turn out to be a trendsetting movement, considering Maruti is the largest car seller in the Indian market. Many other companies could follow the leader and introduce electric vehicles in the market, making our cities cleaner and save the environment as well. EV’s are a brilliant solution for cities like Delhi where pollution levels have reached a deadly level.