Japanese car maker Nissan, which earlier gave a new lease of life to the Datsun brand, recently unveiled the Datsun Go+ MPV in the MPV-loving car market of Indonesia. The Go+ is basically a seven seater version of the GO hatchback that was unveiled in India earlier this year. The Go hatchback and the Go+ MPV are underpinned by the same platform, share a lot of design cues and have the same powerplant too.

The Datsun Go+ is 3.95 long, is 1.6 meters wide and is 1.4-meters high. Thanks to its sub-4 metre length and 1.2 litre petrol engine, the Datsun Go+ MPV will benefit from lower excise duty when it is launched in India some time later. The MPV has a wheelbase of 2450mm. 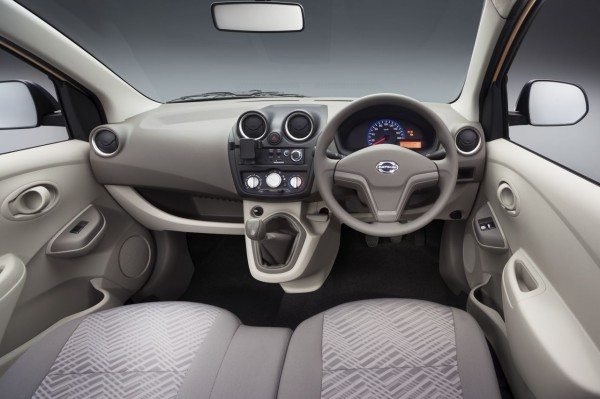 On the inside, the Go+ will come with all the features that would be available on the hatchback sibling.

The 1.2-litre three- cylinder petrol engine that powers the Go+ (and the Go) has a max power of 75PS and has a peak torque of 104Nm. Safely expect the car to get the 1.5 litre K9K diesel engine when it is launched in India.

Nissan says that the sales of Go hatchback and the Go+ MPV could account for 50 percent of the total sales from Nissan Motor in Indonesia in year 2016.

For the Indonesian market, both the Datsun GO hatchback and the Datsun GO+ MPV would be locally produced at the Purwakarta manufacturing facility. Both the car would be on sale by 2014. Datsun has stated that the Go+ MPV will go on sale with for a price of less than 100 million Indonesian rupiah (approx INR 5.5 lakhs) in Indonesia.

We expect to be greeted by the Go+ at the 2014 Indian Auto Expo early next year.

Does Maruti Ertiga need to be scared?