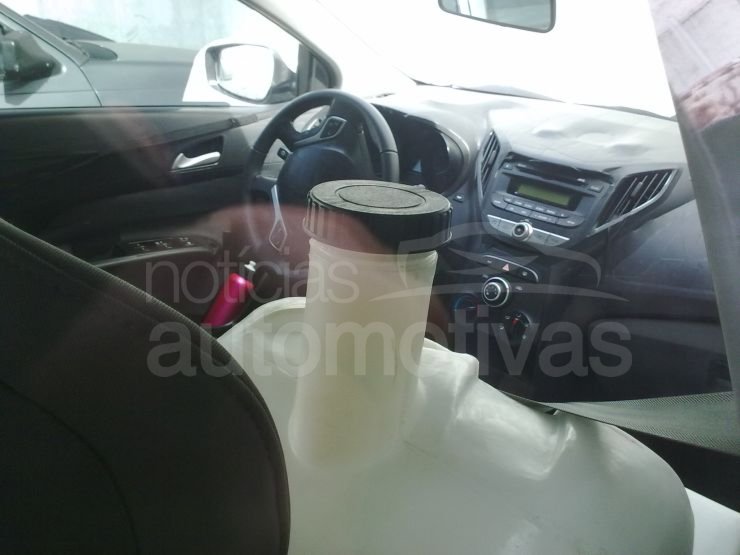 Discuss this topic on the Motoroids Talks section

The Hyundai i15 or the HB is the Korean carmaker’s attempt at plugging the gap between the i10 and the i20. There are plenty of customers in developing countries such as India and Brazil for whom the i10 is too small and the i20 is too expensive. The HB or the i15, as we have told you in our earlier stories about the car as well, will fit slam-bang between the two models, giving direct competition to the likes of the Swift.

We have shown you some exterior spy pictures of the new HB earlier. Now, Noticias Automotivas of Brazil, who have been after this car like a hound, have managed to take pictures of the interiors of this new baby. The car was caught testing in the neighborhood of Ipiranga in Sao Paulo.

The interior of the car looks strikingly different from any of the current Hyundai cars on sale in India. Very clearly, the interior has been done up from the scratch for this particular models. Here is a list of key things that we observed about the interior

1. Steering mounted audio and phone controls. Although we cannot see it clearly, there seems to be a cruise control button as well, behind the wheel.
2. The four-spoke steering wheel is contoured and leather wrapped. Should feel extremely good to hold, with that soft material around it.
3. A new design for the center console
4. Central A/C vents are sharply designed with vertically mounted fins
5. Side A/C vents rectangular in shape with horizontally mounted fins
6. A/C doesn’t seem to have climate control
7. CD Player with radio – audio unit seems to have been tastefully designed, although we don’t see any slots for USB and AuX-in (they may well be somewhere below the gearshifter though)
8. Center console somewhat resembles that of the A-Star, although it’s done-up in black colour, with titanium finish buttons.
9. Overall theme of the interior is black, with titanium (or aluminum) finish buttons. The volume and AC fan speed rotory controls seem to have chrome finish bezels
10. Twin pods visible in the instrument cluster. Expect a digital readout for sure!
11. The overall quality of material, in the first view looks good. Hyundai of late have been working very hard on their cabin quality, and this reflects in the cabin
12. The light and wiper stalks behind the steering wheel, with all the markings suggest that this is the fully loaded, top the of line variant being tested.
13. Front seat, in one of the pictures seem to have great bolstering, something that reminds of the new Fiesta
14. A cubbyhole right in front of the gear shifter to store small items
15. The lid of the glove box gives us an impression that space inside is good
16. Bottle holder in the door

Our regular readers would remember that we brought to you the spy pictures of the Hyundai HB or the i15 earlier too on as many as two occasions. The new car is expected to be brought to India as well, where this segment is where the biggest volumes are. The i15 will most likely be powered by the same 1.2-liter Kappa2 engine that produces 80PS@6000rpm / 111Nm@4000rpm and powers the Hyundai i10. Diesel option would most likely be the 1.4 liter CRDi unit 90PS@4000rpm / 220Nm@1750rp that powers the Hyundai i20. If the length of the new car is shorter than 4 meters (which we are quite sure it is), it will qualify as a small car in India with the aforementioned engine options and get an excise duty cut.

No official word from Hyundai has come out as regards the HB or the i15. However, looking at the almost finished state in which the car is currently to expect a show debut at the 2012 Expo wouldn’t be very optimistic. Launch can be expected by mid-2012.

Would the car get precedence for you over others with whatever you have seen of it till now? Do let us know…here are all the spy pics.