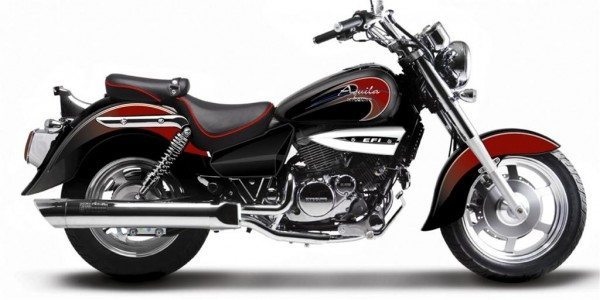 It won’t be wrong to say that the DSK-Hyosung group has tasted considerable success with its 650cc GV650 Aquila Pro. The Hyosung GV650 Aquila Pro recently bagged the Premium Bike of the Year 2013 Award from Autocar and there are good chances that it would be soon joined by a 250cc sibling in Indian market.

That the GV250 is headed our way has been a well known news and the recent development on this subject is that the 250cc Korean cruiser could be launched during the upcoming Auto Expo 2014. Currently, the bike is under homologation and if everything happens as per planned, it would step into the fast growing Indian bike market in February.

The Hyosung Aquila GV250 can be perceived as a less powerful, smaller sibling of the GV650 and the upcoming quarter litre cruiser is bound to benefit from the 650’s success.

Visually, the 2013 Hyosung Aquila GV250 doesn’t look exactly similar to the GV650, which is definitely a good thing for 650 owners as they won’t have to see cheaper 250cc clones running alongside them.

It is expected that the Hyosung Aquila GV250 will be launched in India @ INR 2.5 lakhs and could open gates to an all-new segment of low displacement premium cruiser bikes in India.

Are you looking forward to the launch of the Hyosung Aquila GV250? How much are you willing to pay for it? Do let us know by commenting below.