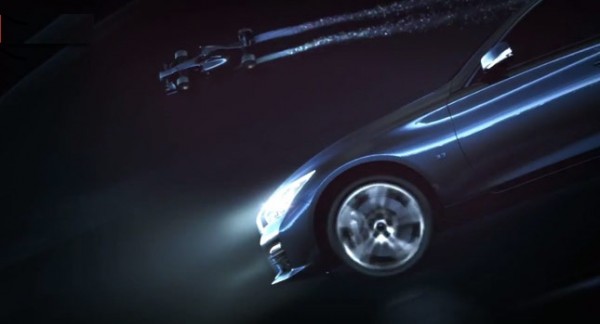 Regulars here would remember that we reported in detail when Infiniti released the first teaser photo pf the upcoming Q50 Eau Rouge earlier this month. Now, Infiniti has released another teaser, this time a video clip, of the Q50 Eau Rouge performance sedan.

This computer-generated film shows the sedan running alongside a Formula One car and the two later merge into a ball of liquid metal and then, explode and evaporate. Other than so much of computer generated drama, the video shows the “3.7” badge on the car’s front fender. Quite obviously, this means that the car is powered by a 3.7-liter V6 engine and it is expected that this motor would have at least 320 hp of max power. In all probability, this is the same engine that is available with the Q70 sedan.

The video also reveals the retail name of the upcoming model- the Q50S. The pre-production model though, would make its public debut at the upcoming Detroit Auto Show.