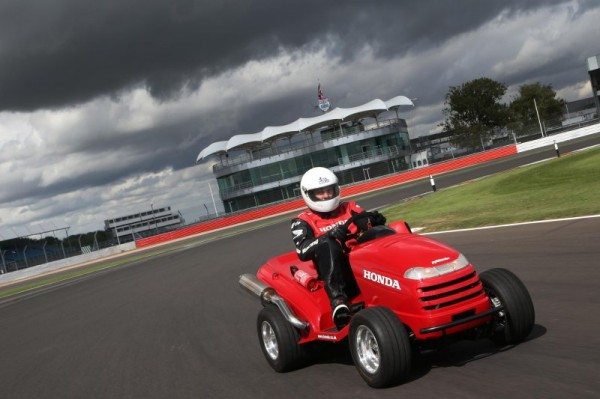 In this month’s magazine, Piers Ward of BBC TopGear praises the “brave men and women of Honda” for creating the 1000cc beast, going on to explain that because Honda stepped up to the challenge and the resulting “life-affirming event” of driving it makes it worthy of a BBC TopGear Magazine award. With it not being a car, they had to invent an entirely new category for Mean Mower, hence the new ‘Thing of the Year’ category.

Mean Mower appeared at the SEMA Show in Las Vegas, the world’s premier automotive speciality products trade event showcasing more than 2,000 new products and vehicles from across the globe. Displayed alongside Honda’s latest Civic coupe it was admired by more than 60,000 international trade visitors.

The 109hp Mean Mower was commissioned by Honda (UK) and built by its BTCC partner, Team Dynamics. As well as a blistering top speed of 130mph, it is geared to cover the 0-60 sprint in a mere four seconds. It weighs just 140kgm, producing 96Nm of torque and boasts an incredible power-to-weight ratio of 532bhp/tonne.

The project saw Team Dynamics re-engineer a Honda HF2620 Lawn Tractor from the ground-up, adding a custom-made fabricated chassis, a 1000cc engine from a Honda VTR Firestorm motorcycle, a bespoke suspension and wheels from an ATV. It features a custom-made paddle shift six-speed gear system, a bespoke sports seat and a Scorpion exhaust system.

Piers Ward of BBC TopGear Magazine enthuses: “On any logical level, the Mean Mower makes no sense – no one really needs a 130mph lawnmower that can do 0-60mph in four seconds. But sometimes, we just need our grass cutting faster…”

Ellie Ostinelli, PR Communications Manager for Honda (UK) added: “Mean Mower has captured the imagination of millions of people and demonstrates brilliantly Honda’s spirit of innovation and ability to create extraordinary pieces of engineering. We are delighted with BBC TopGear’s ‘Thing of the Year’ award… with all the hard work the machine has put in over the last six months, Mean Mower certainly deserves it.”