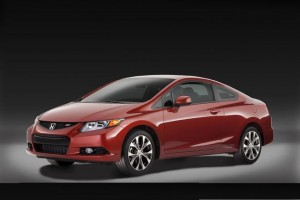 The Honda Civic has received an award from the Women’s World Car of the Year committee. The award was presented to Honda at the Paris Motor Show 2012.

The Women’s World Car of the Year is divided into four categories; Family Car, Luxury Car, Sports Car and Economy Car. The Honda Civic was chosen as the winner for the Economy Car category with second and third places going to the Volkswagen UP and Ford Fiesta respectively.

The Honda Civic was selected from an initial entry list of 300 cars which were nominated by 20 women judges from 11 countries around the world.

The judging panel for the Women’s Car of the Year assessed the Civic according to the criteria women consider when buying a car which include safety, value-for-money, aesthetic appearance, storage space, ease-of-driving, colour, sex appeal, environmental footprint and child friendliness.

The award coincides with Honda’s recent announcement of new additions to Civic range  which include a new the 1.6-litre i-DTEC engine which will be available on the Civic later this year, a new wagon’- style Civic model and a New Civic Type R in 2015. All of these new derivatives are for the European market.

On receiving the award, Konaka ,commented: “This award highlights the unique exterior styling and practical interior that are synonymous with the Civic model and meet the needs and desires of customers within the C segment in Europe.”