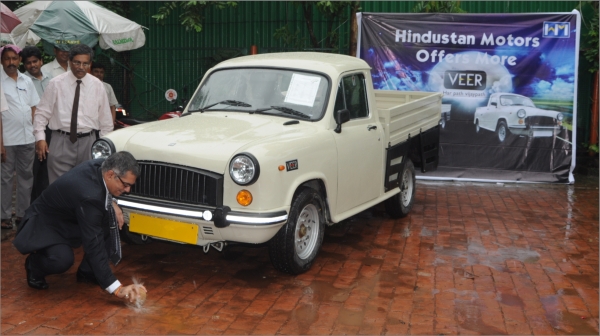 Remember the spy pictures of the Ambassador based pick-up truck we showed you a few months back? The pick-up with Ambassador’s face is now a reality. Hindustan Motors for some reason have used the Ambassador’s classical front end as the face of their new pick-up Veer. While the company had a similar product long back, in today’s times, the classic fascia for a commercial product just doesn’t look right.

Talking of the technical aspects, Veer is a 0.8-tonne (800 kg) small commercial vehicle (SCV).  The VEER is built on the Ambassador platform, incorporating changes in transmission and suspension systems required for a sturdy load carrier. The vehicle is available in both diesel (BS III) and CNG (BS IV) versions and in two models – VEER and VEER LX. While VEER has a separate load tray, VEER LX’s load tray is seamlessly integrated with the front cabin. The Veer is powered by a  1.5 liter 35 bhp diesel engine and a 1.8-liter CNG engine with 55bhp.

With space for three in the front cabin, the Veer claims to be more comfortable than other such products in the segment. The vehicle is also available as a drive-away chassis (DAC) with front cabin. Hindustan Motors is launching VEER initially in East India with plans to go pan-India over the current financial year.

Apart from launching the Veer, HM also announced that more products will follow the Veer. We expect a refurbished Ambassador, as well a short boot version of the sedan to make their debut in the coming months. HM Chairman CK Birlo announced the imminent launch of a slew of new vehicles at HM’s annual general meeting on August 4.

“We have honoured our commitment by launching VEER. More new vehicles will follow suit. These will come both from our Uttarpara plant in West Bengal, where we manufacture the iconic Ambassador and other vehicles, and our Chennai facility where we build the Mitsubishi range of vehicles. Our bouquet of offerings is set to expand at a fast pace due to our reinforced emphasis on new product development,” stated Mr. Manoj Jha, HM’s Managing Director, after unveiling the new vehicle.

So what you think guys? Would Veer be able to pull HM out of troubled waters? Or would the outcome be similar to that of a Salman Khan starrer bearing the same name.