Update: According to a report, a production model of the Hero XPulse will be launched sometime in Mid-2018. It states that the production-spec Hero XPulse will be slightly bigger in dimensions than the now-discontinued 150 cc Hero Impulse. However, it will be an all-new motorcycle model and will be powered by an in-house developed, 200cc, single-cylinder, air-cooled engine.

The report mentions that while working on the motorcycle, there was opinion within the company to make the XPulse a more powerful motorcycle. However, Hero officials also wanted the bike to be a more affordable and accessible product for the mass market. As a result, performance numbers gave way for figures which would make the XPulse a competitive product. The Hero XPulse will be powered by a 200 cc engine which develops 20 bhp of power for a motorcycle which will have a kerb weight of just 140 kg. For comparison’s sake, the RE Himalayan weighs 186 kilos and is powered by a Long Stroke motor which develops 24.5 bhp and 32 Nm. Said to be priced between INR 1 – 1.2 Lakh, the Hero Xpulse could go to become the weapon of choice for those who’ve been on the lookout for a fun, affordable, lightweight, and decently powered adventure motorcycle.

Hero MotoCorp has unveiled the Xpulse motorcycle as a world premiere at the EICMA in Milan, Italy. The motorcycle is currently in concept form and we’re yet to hear any details on the timeline of the arrival of the production-ready model. The Xpulse Concept provides a glimpse into Hero’s plans to expand further into higher engine capacity segments. Here’s what we know about the new Hero MotoCorp Xpulse.

The motorcycle is expected to be launched in the 200-300cc segment and thus we expect to see a premium price tag. While Hero MotoCorp has remained tight-lipped about the prices, we expect the new Xpulse to arrive below the INR 1.5 lakh range. 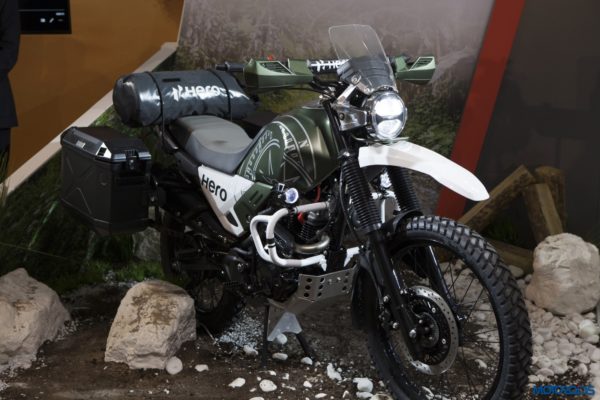 The motorcycle is in the concept form and there is no specific timeline mentioned about the arrival of the production model. We expect to see the production spec model arriving by the end of 2018.

The motorcycle is designed to be a proper off-roader which is evident in the way it has been designed. The tall-set front fender, larger front wheel and wire-spoke layout, knobby set of tyres, sump guard, long travel suspension and knuckle guards hint that the motorcycle is designed to take the beaten path. The concept motorcycle was also equipped with luggage panniers and a small windscreen which make it a proper tourer too. 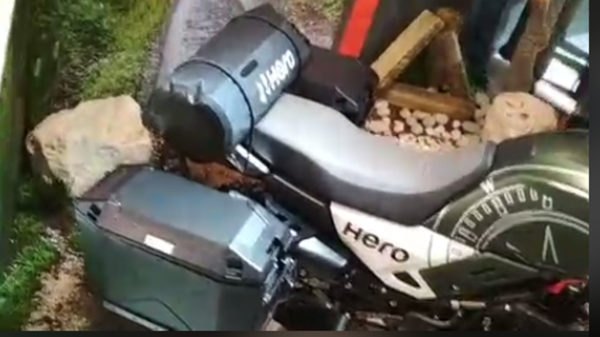 Hero MotoCorp hasn’t revealed the technical specifications although the motorcycle, as stated by the Company, ‘Provides a glimpse into Hero’s plans to expand further into higher engine capacity segments’ and thus we expect to see a displacement between 200-300cc.

ABS will come as standard while braking duties will be performed by disc brakes on both ends.